Winning Best of Show in the In-Print contest traditionally means producing a multi-page publication with perfectly executed crossovers and excellent bindery work. That’s why this year’s offset Best of Show winner was such a surprise.

The winning piece was a poster; no crossovers, no binding, just a flat sheet. Still, it was the result of some very skillful presswork, which the judges recognized when making their decision. 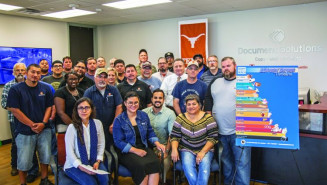 “The piece that won was a surprise to us, but they did a great job,” remarks Richard Beto, director of Document Solutions at the University of Texas at Austin, winner of the In-Print 2018 Best of Show award for offset. He actually had his hopes pinned on an entirely different piece, one of the four Gold winners UT Austin claimed this year. But as the judges narrowed down the finalists, that piece moved out of contention, until only the poster and a booklet from the Church of Scientology International’s in-plant were left standing. That booklet boasted several crossovers and vibrant color printing.

“It was a great piece,” praised Beto.

But as the judges considered the level of difficulty required for UT Austin’s in-plant to print a solid blue on an uncoated sheet, their respect for the poster grew. There was not a single roller mark on it. Why was this such a challenge?

“The dots are going to get lost on the uncoated stock because the ink gets sucked up,” Beto explains. The lead press operator, Mark Canepa, used his years of experience to get it right. 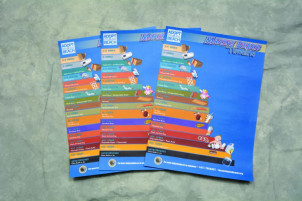 The judges thought so as well and awarded the piece the top prize. This was the second year in a row that UT Austin won Best of Show.

“It’s pretty significant, and to win it two years in a row…it’s not a fluke,” says Beto.

The in-plant has been entering In-Print since 2006 and in that time has amassed 50 awards for quality printing. The Best of Show winner this year was a poster for the Texas General Land Office promoting its Adopt a Beach program. The 50-employee in-plant printed 300 posters.

The job was designed by the client’s design group using Adobe InDesign, and a print-ready file was sent to the in-plant. James Rutledge ran proofs on an HP DesignJet Z2100 photo printer. He then output plates on the shop’s Fujifilm Luxel Vx-9600 CTP.

Then Canepa, with the help of Landon Beisert, plated the in-plant’s Komori Lithrone SX29 5C with coater and began printing the posters one-up on 100# White Accent Opaque Smooth Text paper from International Paper.

Vince Serna cut the posters down on the 40˝ Polar 115 cutter, and Victor Castillo packaged them for delivery.

“They work really hard and they want to do a good job,” praises Beto. “The award is independent validation of the work that these employees do for the university and our customers.”

Three New Challenges of the New Normal
END_OF_DOCUMENT_TOKEN_TO_BE_REPLACED
Upcoming Webinars
Print Outlook: What to Expect in the Year Ahead