When a Print Show Comes to Your Backyard 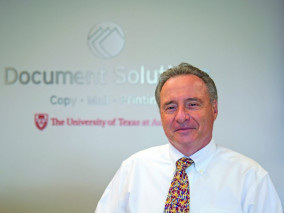 When you work in Austin, Texas, attending PRINTING United is a no-brainer.

"Dallas is in our backyard, so to speak," remarks Richard Beto, director of Document Solutions at the University of Texas at Austin. But the 39-year print industry veteran has much more important reasons for attending than proximity. Having just purchased a Colex contour cutter, Beto wants to follow up by adding a flatbed wide-format printer, and feels there's no better place to check out his options than at PRINTING United.

"I'm going to go up and put hands and eyes on what we think will be the flatbed printer of our choice," he says.

Beyond that, though Beto is is also eager to see everything the inaugural PRINTING United event has to offer.

"I'm excited to see it all," he says. "We are always interested in learning about what is new in the industry."

And since wide-format is one of the areas of largest growth at his 52-employee in-plant, he knows there's no better event for him to attend this year.

Beto's plan is to spend the first day covering the entire show floor, taking notes on the exhibits he wants to return to. On day two, he'll return to those booths and explore them in detail. And by day three he'll be ready to make some serious decisions.

Beto is also happy about the networking opportunities that await him at PRINTING United, with so many fellow in-plant managers expected to attend the event and get together at the three in-plant forums being hosted by In-plant Impressions.

"I plan on being there to gain more knowledge from networking," he says. He encourages other print professionals to join him in Dallas in October.

"It's going to be a good show," he says. "Everybody should be there."