Mayo Clinic’s in-plant is producing and installing some very ambitious wide-format projects that are transforming Mayo’s campuses while saving the organization substantial amounts of money.

While the Mayo Clinic’s large-format operation might have started off as strictly a photo lab, with chemical processes in the on-site darkroom, times have changed, and the range of services it offers has expanded. Today, the Rochester, Minn.-based in-plant employs around 65 people and operates a full compliment of equipment, including a well-stocked wide-format department.

The wide-format printers in use include two 44˝ aqueous devices; 60˝ aqueous and eco-solvent printers; and a UV flatbed printer with white ink capability and a roll option. The range of technologies and sizes ensure the in-plant is always ready for any project the organization might need, no matter how broad the scope or where it might be located.

“When digital came along, we purchased our inkjet printers to print large posters, and over time the [inkjet area and photo lab] melded together,” says Brian Hindal, print production specialist in the Mayo Print Production Unit’s Large Format Output division. “We eliminated the photo chemical process and switched to digital.”

Two projects in particular highlight how the Mayo Clinic in-plant is using wide-format technology to transform spaces in innovative ways. One project occurred in the organization’s Florida campus in Jacksonville, specifically for the internal employees in that location. The other was the St. Mary’s Hospital campus in Rochester, which included a complete reconstruction and redesign of the pediatrics floor.

“The Florida campus project was specifically geared for an internal employee campaign,” notes Hindal, “even though some patients probably saw it. It was also a short-term run, geared for six months or less, and included window graphics for two entrances, one window wall, and five employee elevator doors.

“The Rochester campus project was the atrium area, a collection point for patients to sit and wait,” he continues. “It was completely redesigned with new wallpaper, along with other design pieces, like custom glass graphics. The project also entailed re-wallpapering the recovery room hallway.”

As part of the Rochester campus redesign, the team brought in elements used throughout the rest of the Mayo Clinic’s pediatric areas, helping tie it all together. The theme is based around wildlife, with Hindal noting that it uses a range of birds and animals mostly native to the southern Minnesota area. The graphics even include some interactive elements, such as definitions or descriptions, as well as small birds hanging from the ceiling.

“It is much more welcoming and soothing, and a lot less stressful for the patients,” he says. 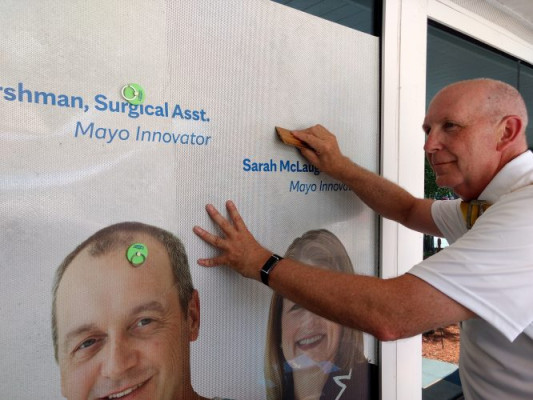 Here are some of the wide-format graphics printed by the Mayo Print Production Unit’s Large Format Output division and installed by Brian Hindal, print production specialist. These graphics have transformed Mayo’s campuses. 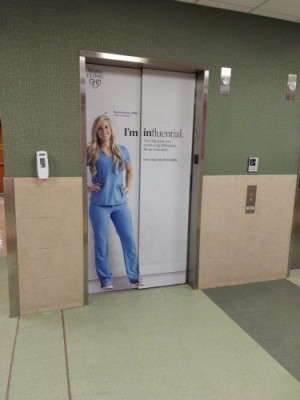 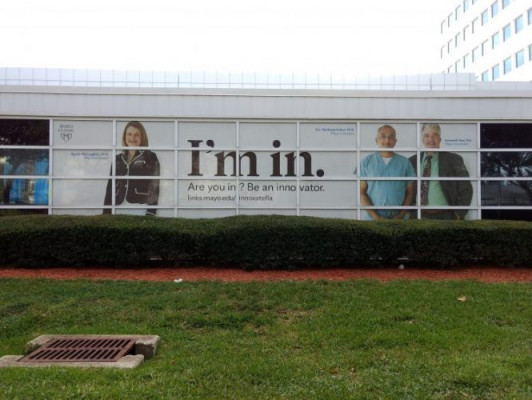 Just as the graphics used were very different for the two projects, the ways they were conceived and implemented were different as well. With the Florida campus, Hindal notes that an outside agency was hired for the bulk of the creative elements, designing the slogan and graphics to be used for the internal promotion.

“Then it came to the point where we needed to get this printed and installed,” he says. “So they said ‘lets call the print shop and see what they recommend.’ So I came in on the tail end, and because we’re an in-plant, we were able to provide everything needed, and there was a huge cost savings printing it in-house versus having an outside firm print and install it.”

Involved at the Onset

On the Rochester Campus, however, the in-plant was involved from the very beginning of the project.

“The internal designers had an idea, and we were working with the internal construction crew,” says Hindal. “The doctors from pediatrics were involved in the collaboration as well. We knew that we would do all the printing in-house, it was just figuring out the best way to accomplish it — before or after construction. There was full interaction with everyone.”

The atrium in Rochester took almost 3.5 weeks to move through the shop, says Hindal, and was printed and installed in sections, with the second-floor graphics finished first and sent to the install team while the third-floor graphics were printing. When those two areas were completed, they switched to the hallway.

“Granted, we didn’t do it all start-to-finish nonstop,” says Hindal. “We would have a section come in, apply it, and then there would be a three-to-four-day break before the next one.”

“Florida was more cut-and-dry,” he continues. “Everything came in at once and moved through in six days.”

Hindal flew down to Florida to be on-site for the installation, which was done one building at a time. One challenge with that approach, however, was that since he wasn’t the one to do the measurements, when he got on site, he discovered that the elevators were all slightly different sizes, rather than the single size they had provided.

“Some were smaller or larger — nothing really great, but when you’re an inch short, it’s noticeable,” says Hindal. In the end, however, he notes that only two of the panels ultimately had to be re-printed and shipped down overnight, with the rest getting slight adjustments to their placement during installation, a solution that worked well, he notes.

“Overall it ended up being a great install,” says Hindal.

The Rochester atrium also required some reprints, despite being a local project, as Hindal noted that while the design and work were mostly done in-house, there were a few elements that came from outside sources that were formatted incorrectly for the size.

“As with any construction, measurements and sizing [are] an issue,” he notes. “They can measure, and it looks great on paper, but when they get the wall up and the fixtures in, things are never exactly the same. So we usually have to reprint a few panels as we go along.”

Despite occasional reprints, Hindal notes that doing the wide-format printing in-house was a massive savings over bringing in an outside firm — even once additional costs, such as flying him out to a location for installation, were factored in.

“We did a calculation, and we could reprint an entire wallpaper job multiple times internally, and it would still be less expensive than sending it to an outside source to print once,” he says. It’s also quicker, since the in-plant has the ability to get a file, print it, and ship it within 24 hours, allowing the teams to make tight deadlines — without incurring the double or triple rush fees an outside printer might impose.

Hindal admits that while every in-plant operation has its own process, and own needs, “it’s fairly lucrative if you can take care of everything within the in-plant. With projects like this, you need larger equipment, but by keeping everything in house, you keep brand control, you actually get the graphics up on time, and everything always looks good and professional. If there are in-plants considering any kind of wide-format, I would definitely suggest looking into it.”

He notes that in addition to reducing costs by a huge amount, bringing these types of projects in-house is also a great way to ensure the parent organization is more aware of what the in-plant is truly capable of, making it more valuable in the long run.

For Hindal and the Mayo Print Production Unit, wide-format will continue to play a major role in its operation, with new projects always on the horizon.

“There is always new construction and remodeling being done on the hospital campus,” Hindal says. He cites upcoming projects to revamp the entire Rochester Campus underground subway system, new artwork for many of the areas throughout the facilities, new patient experience areas, and more centerpiece installations to make spaces more inviting and welcoming for patients.

Hindal notes that attending PRINTING United in 2019 gave him some great ideas for new technology additions to his operation.

“[Last] year at PRINTING United, a hard look was taken on specs for a CNC [contour] cutter,” he notes. “We have been looking for a year or two, and this year the pricing looks good and we are going to start the process of approval.” Adding this will allow the in-plant to bring even more value to its Mayo Clinic customers.

Wide-format printing has become a driving force for this in-plant as it has reinvented itself to stay relevant to the changing needs of its parent organization. From a humble photo lab to a powerhouse print shop, the Mayo Clinic in-plant will only continue to find innovative new ways to use print technologies to serve and support the mission. It is a true success story.