Our Carbon Footprint: How Do Paper Products Fit In?

A household carbon footprint refers to the overall amount of greenhouse gas (GHG) emissions generated by all the energy and materials consumed by those who live in a home as they go about their daily lives. It is a common measure of the contribution of a single household to climate change. Understanding your carbon footprint can show opportunities for decreasing your consumption of energy and materials, and in turn, reducing your production of carbon emissions.

By far the largest source of human-induced carbon emissions, is the burning of fossil fuels such as coal, oil, gasoline, diesel and natural gas.  In GHG inventory and carbon footprint studies, the use of fossil fuels is usually the cause of elevated GHG emissions.

The U.S. Environmental Protection Agency suggests that the average American household produces 54,462 lbs CO2 each year from transportation, electricity, heating and waste production.[i]  The Cool Climate Network[ii] based at UC Berkeley took a more thorough look at American households and also included air travel, food consumption, services (such as health care, education and entertainment) and goods (such as clothing and personal items) in the household footprint calculation. They came up with an average household footprint of 96,000 lbs (48 tons) of CO2 per year (Figure 1). 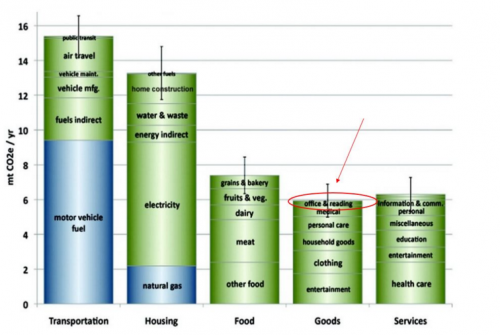 So where does all this CO2 come from? The largest share comes from transportation and housing which make up 57,600 lbs CO2 or 60% of the total. That means that driving our cars, heating and/or cooling our homes and running appliances make up the major part of our household footprint. Food contributes another 15% with much of that a result of the large amount of energy required to produce meat. Goods and services each contribute 12.5%, with entertainment, clothing and health care being the main sources of CO2 in those categories.

And where might paper and print consumption fit in? The Cool Climate Network has a category called “office and reading” which includes paper as one component. The whole category represents about 400 lbs of CO2 annually or 0.4% of total household CO2. Similar results were found in Finland where 0.9% of the overall climate impacts of household consumption were attributed to printed products.[iii]

Overall, paper and print products appear to make up 1% or less of our human carbon footprint.  As a comparison, the following numbers are reported for other sectors:

The ICT sector (i.e. computing and digital communications and technologies) GHG contribution is expected to be at about 6% by 2020.[vii]  In other words, the carbon footprint of the global digital movement is a more serious concern than paper-based communications.

What is the carbon footprint of paper products?

The carbon footprint of paper products is defined as GHG emissions emitted during the life-cycle of paper production, converting or printing and distribution (from production of raw materials used in manufacture, to disposal of finished product, excl. emissions during use of the product).

Paper’s carbon footprint can also be divided into three basic elements: greenhouse gas emissions, carbon sequestration and avoided emissions. Each of these elements is influenced by important characteristics that make paper’s carbon footprint smaller than might be expected: it’s made from a renewable resource that stores carbon, it is recyclable and it is manufactured using mostly renewable energy including biomass, biogas and hydroelectricity.

Various calculations have been made to measure the carbon emissions of paper products throughout their life cycle. For example, the production, delivery, and disposal of a newspaper is said to generate about 0.49 lbs of CO2 [iii] and if you subscribe to a daily paper that works out to be 147 lbs of CO2 each year - roughly the equivalent of driving 186 miles. A National Geographic magazine generates 1.82 lbs CO2 during its life cycle.[viii] If you get one each month, that is similar to driving 24 miles annually. Paper towels generate about 0.06 lbs CO2 [ix] each and even if you use 10 each day, in a year your paper towels would general 219 lbs of CO2 or the equivalent of driving 173 miles. Considering that the average American drives 13,476 miles each year,[x] the amount of CO2 generated by paper products is relatively small.

A life cycle study of four types of North American paper grades (office paper, catalog, telephone directory and magazine) showed that the largest portion of the carbon footprint came from the paper production stage (44-67%) and the smallest portion from transportation (1-2%) (Figure 2).  The end of life stage (disposing of paper in landfill sites and its subsequent breakdown producing methane, a potent greenhouse gas) accounted for 19-38% of the total carbon footprint.[xi]

In the last two decades, the North American pulp and paper industry has taken great strides in reducing its carbon footprint.  Greenhouse gas emissions from the U.S. pulp and paper industry dropped from 44.2 to 37.7 million metric tons CO2 equivalents (15%) between 2011 and 2016 due to improved energy efficiency and increased use of less carbon-intensive fossil fuels and carbon-neutral biomass-based energy sources.[xii] In 2014, 67% of U.S. pulp and paper mills’ energy needs were provided by renewable biomass and fuels.[xiii] In Canada, bioenergy continues to increase its share of the energy mix, accounting for 56% of forest industry energy use in 2014, up from 49% in 2000 and 43% in 1990. Between 2004 and 2014, the Canadian forest industry reduced energy use by 35% and GHG emissions by 49%.[xiv]

Given that paper products make up about 1% or less of our carbon footprint, going “paperless” will not achieve significant reductions of a person’s or household’s carbon footprint.  Individuals would accomplish more by riding a bicycle or taking the bus (instead of driving), eating vegetarian (instead of meat) a couple of times per week, turning the thermostat down a few degrees in the winter and reducing air conditioning use in the summer, as a few ideas.

[vi] This does not include sustainable managed forests used for forest products in North America.  Sustainably managed forests are re-planted and remain forest areas – they are not defined as “deforestation” by the UN FAO.

Sustainability Is Here To Stay

Three New Challenges of the New Normal
END_OF_DOCUMENT_TOKEN_TO_BE_REPLACED
Upcoming Webinars
Print Outlook: What to Expect in the Year Ahead