Comcast’s 'EcoBill' Is All About Saving Money, Not Trees! 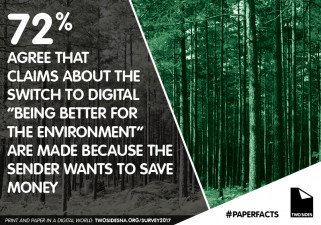 Leading Fortune 500 companies have been collaborating with Two Sides for the past five years, and more than 105 North American corporations (more than 275 globally) have now removed misleading claims related to print and paper. Chief marketing officers and chief sustainability officers from Starbucks, Wells Fargo, Citibank, U.S. Bank, Macy’s and many others are making changes. Why isn’t Comcast joining its peers?

Since 2012, Two Sides has received several complaints from Comcast customers about the company’s green claims that promote digital services over print and paper. These customers are people who work in the print, paper and mail value chain - a network that provides over 7.5 million jobs and generates $1.4 trillion in sales revenue in the U.S. alone.

Two Sides has sent Comcast’s CEO two letters explaining why the claims are misleading. We have sent letters to senior officials in their legal department and their communications department. Yet to date, we have not received a response to our letters or to follow up phone calls to their executive office.

Our request is simple: we are asking that Comcast marketing messages not include unsubstantiated environmental claims that fall short of the Green Guides published by the U.S. Federal Trade Commission. In other words, remove claims about “saving trees”, “going green”, and stop calling online billing an “EcoBill”. Comcast should also note that most people do not see digital as “more secure”.

Paper should not be portrayed as a bad product compared to digital services. They both have pros and cons, and paper happens to be highly recyclable and based on renewable and responsibly managed North American forest resources. In addition, U.S. consumer surveys have shown that many Americans prefer the benefits of print and paper over digital services, and are skeptical of green claims used to promote digital (see below “How do Americans feel about ‘paperless’ initiatives?” from U.S. Consumer Surveys by Two Sides & Toluna, 2016 and  2017).

Two Sides is committed to ensuring North American companies adhere to reasonable, credible and science-based facts when making environmental claims about print and digital services. Here are some key science-based facts and links that support our position:

For a more detailed explanation of why "go green - go paperless" claims mislead consumers, see our Fact Sheet on this topic.

Being a sustainable company means a lot more than using unsubstantiated marketing slogans, and Comcast knows this. They have great sustainability initiatives underway that are making a difference, without greenwashing.

Perhaps it’s time for their sustainability and marketing departments to get together, study the U.S. FTC Green Guides, get the facts about print and paper, understand consumer needs and preferences…and send the right message about sustainability.