Who Invented the First Folding Machine?

Welcome to the first edition of the Bindery Success blog for In-Plant Graphics. Thank you, Bob Neubauer, Editor of IPG, for inviting me to participate in this community. Our goal here is to freely share ideas on how your printing operation can get better post-press results and improve productivity. Please feel free to send me your questions, problems, or ideas and we’ll work to include them in future columns.

Print finishing equipment has always held a special fascination for many of us in the industry. If you’ve ever closely watched a complex piece of bindery equipment, it probably left you wondering how anyone conceived of such an idea with so many moving parts working in perfect harmony. On the other hand, were they not working so well, it might have left you wondering who to blame for your suffering! 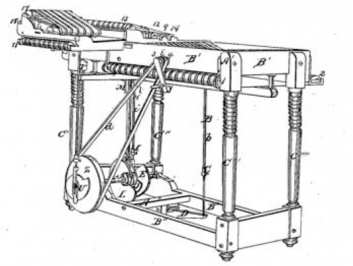 Mechanical nerd that I am, I was doing some research on folding machines and found three interesting tidbits about folding technology.

The first item came up during a search of the US Patent & Trademark Office at uspto.gov. I found that the earliest US patent granted for a paper folding machine was on Nov. 27, 1849. Edward N. Smith of Massachusetts was granted patent #6896 for a clever knife folding unit. Surprisingly it doesn’t look too different from our current machines.

Smith’s 166-year-old design uses the same principles seen today in modern knife folders. A belt transports the sheet to a spot where a knife drives it into a set of fold rollers. Then it’s on to the next section of belts, rollers and cam-activated knife. The folder can be set to do three right angle folds and two parallel folds. It’s designed to work independently or in-line with a press. 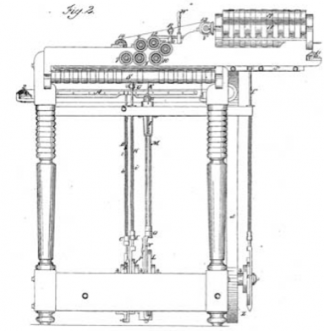 As with most research, the answers raise more questions. How did the operator register the sheet initially? What kind of production did they get? Did this machine make it in the marketplace? What company was he affiliated with and was the product successful?

Whatever Smith’s circumstances, it was a clever idea for its time. We know the concept worked because a working model of the machine was necessary for patent approval. If you want to wade through the explanation and original patent drawings to learn more, you can download it here.

The second notable item I found is now my second-favorite patent. George Snow “invented” the 32-page signature and received patent #27,166 in 1860 to claim it as his own. You have to love it. At the time the common practice for bookbinding was to fold only 4, 8, or 16 page right-angle signatures. The most important advantage, according to Snow, was to “serve as a sure guide to the book binder” which would minimize sewing errors because fewer signatures were involved. Another important benefit was that it would reduce gathering labor by half or more.

As with Smith, I’m not sure if Snow benefited financially from his invention. Perhaps he licensed it to a bookbinder or folder manufacturer. Maybe he simply framed his certificate and hung it on the wall to show off to his friends.

As an aside, my favorite invention should be ‘patently’ obvious to everyone. Naturally it’s Graham Harris’ and Paul Barrett’s patents for the Tri-Creaser®. When I first encountered this creasing device about fourteen years ago, I didn’t have to do a search to know I had stumbled upon a powerful print finishing tool. The results spoke for themselves. The subsequent years and ever-growing list of thousands of clients proved my hunch was right.

This brings me to the third notable item. Basic buckle folding technology principles haven’t changed much. Rollers drive a sheet of paper in various configurations. It’s all the accessories and components of folding equipment that are changing.

Mind you, my search isn’t exhaustive. Machines can be classified in countless ways in the US patent system. My simple search involved looking up the terms “paper folding machines” and “paper folders” in the title of the patent. So it’s likely there are many more inventions hidden in the archives.

However, when I searched for any patents related to folding paper, it returned thousands of results. With more recent patents, the first things you often see are information management flow charts and electronic diagrams. Computers and programmable electronics make folding equipment more useful, efficient and profitable. They control mechanical systems, they communicate with other equipment and they communicate with human beings.

The newest folding designs also tend to be a component in a larger copier or digital press system. This doesn’t mean that off line folding systems are obsolete. It simply means that a lot of new technology is required to make printing and print finishing systems work well together.