The Association of College and University Printers met in Cincinnati for its 52nd conference, which boasted the highest attendance in years.

You know a conference is good when a major league baseball team holds its opening day parade a block away and no one leaves the sessions to check it out. (Almost no one.)

That was the scene at the 52nd annual Association of College and University Printers (ACUP+) conference in April, when a sea of red shirts and hats flooded the streets outside the conference hotel for the Cincinnati Reds opening day parade. Though the Reds lost to the Phillies that night (4-3), ACUP attendees won big with one of the most engaging, lively and well-attended conferences in years. 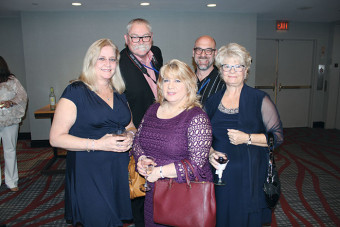 About 110 higher-ed in-plant managers traveled to Cincinnati this year — a 20% increase over last year’s attendance. They came from all corners of the country, including Alaska, as well as from Canada, the U.K. and Australia. An impressive 34 first-time attendees showed up in the “Queen City” for the event.

Though the conference featured sessions on technologies like Web-to-print, variable data, wide-format and bindery, several sessions were devoted to in-plant justification, benchmarking and marketing. Combined with keynotes focused on overcoming the stress of change, the conference seemed more concentrated than usual on preparing managers to take action to ensure the survival of their operations. 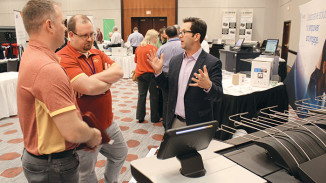 Managers in the vendor exhibit area.

Such heavy issues, however, did not suppress the enthusiasm of attendees, who found ample time for networking in the hallways between sessions, in the busy vendor exhibit area and on the dinner boat cruise along the Ohio River (which was extended an hour due to a barge mishap downstream). A number of free-form roundtable discussions on the last day gave them a chance to speak candidly with each other on specific subjects like garment printing, shredding, employee development and Web-to-print. The group also visited the University of Cincinnati for lunch in the stadium and tours of the university’s two in-plant locations, one housing its offset presses and the other its digital, wide-format and garment printing equipment. 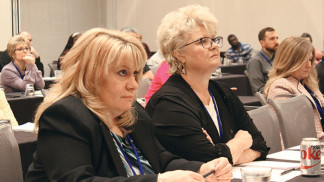 Managers from Alaska and Texas at a session.

At the ACUP business meeting on the conference’s last day, President Richard Tussey noted that the association now has 222 members. A new website is coming, as is a quarterly enewsletter, and ACUP continues to seek new members, particularly at the K-12 school level.

ACUP 2017 started with some laughs and lessons as keynote speaker Mack Dryden gave an inspirational and humorous talk that drew plenty of laughter — even as he described his battles with cancer and his stint in a Moroccan prison. He also shared his seven-step formula for achieving personal and professional goals. 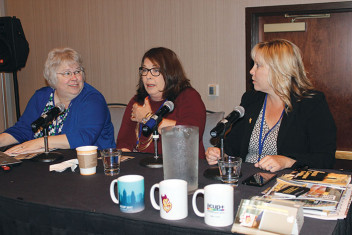 A panel on marketing stressed the importance of promoting your in-plant to the institution, whether through email blasts, face-to-face meetings or partnering to help departments solve their problems. For instance, when Cathy Skoglund (Arizona State University) learned how complicated it was for the marketing department to manage updating and printing campus guides, she offered to take over the project, make updates whenever needed, and print guides on demand via the in-plant’s Web-to-print system. Now that department is a big fan and advocates for the in-plant.

ASU’s Print & Imaging Lab is well known for successfully employing a large student workforce. This has aligned the in-plant with the university’s educational mission, and served as an excellent marketing tool. Skoglund emphasizes to employees the importance of making the in-plant very easy to work with, so customers want to keep coming back. She also insists that every piece produced be worthy of an award, which impresses internal and external partners. 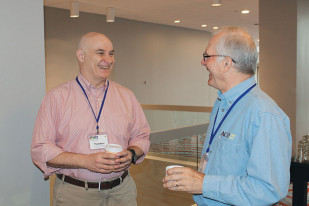 Also on the panel, Naomi Quiram (Gustavus Adolphus College) said that face-to-face communication with customers has been her most valuable marketing tool. She suggests getting to know the administrative and academic assistants who control meeting agendas, to secure a place at the table during department meetings. She attends the initial meetings of student groups so they’re aware of the in-plant, sometimes leaving samples to show what the in-plant can do.

Quiram has invited software vendors to lead training sessions for customers, which they do for free, and branded these sessions so the in-plant is credited for organizing them. When a vendor donated Minnesota Twins tickets for a raffle, she made it clear that the vendor was a partner of Print & Mail Services. Like ASU’s in-plant, Quiram employs a large student workforce, and she promotes the fact that they are learning skills they can use when they graduate.

Promoting your in-plant is important, she said, because when a college or university is looking for places to cut money, its easier to cut an unknown department than one with a well-known face

Avoiding such a cut was the theme of a session by Richard Tussey (Eastern Kentucky University), who offered advice for justifying an in-plant operation. He noted that when the president of his university resigned in 2009, it triggered a review of all campus departments, including the in-plant. Tussey quickly prepared reports showing the in-plant’s annual sales, ROI, budgeted hourly rates and productivity. Administration stared blankly at the data. It was not what they wanted to see, he soon realized. 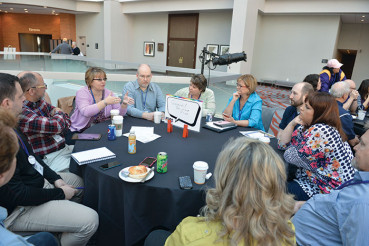 During the roundtable discussions, managers spoke candidly with each other on specific subjects like garment printing, shredding, employee development and Web-to-print. (Photo by Kahrim Wade, UMass Boston)

Instead, he said, they were more interested in data showing which departments the in-plant served and how much revenue it received from them. Of most interest were Enrollment Management, academic departments, Admissions and grant-based organizations.

“You have to know your numbers, but they have to be their numbers,” he cautioned.

Tussey encouraged managers to quickly educate incoming administration on their in-plant’s value and how it focuses on the core mission of the university.   Some ways to do this he pointed out are handling student projects, overseeing graphic design to ensure the university’s visual identity is not compromised, managing the copier program and managing subcontractors. 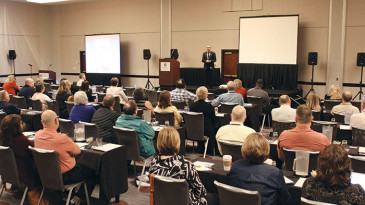 Tussey cited an example of how he added value and found an important partner when he went to Admissions and offered to save the department time and money on its daily mailings, which were being processed by hand. Using the in-plant’s inserter, he took over those mailings, and is now a close friend of Admissions.

“I’m part of their system now,” he said. 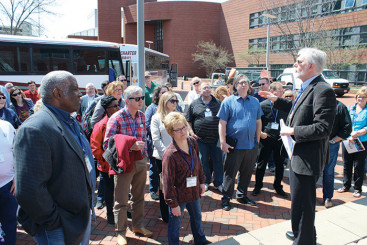 Arriving at the University of Cincinnati

The importance of reporting the right things to management was also stressed in a session on benchmarking when Donna Horbelt (UTHealth) and John Heine (Yale University) listed some of the reports they send their bosses, such as reports on spoilage, customer satisfaction, revenue comparisons, inventory status, digital vs. offset jobs, sales by customer, jobs per day, outsource revenue history and revenue per FTE. But Horbelt stressed the importance of asking your boss what he or she wants to see.

Her boss likes numbers, she said, so she sends him an Excel file. She asked him which report he finds most useful and he said it’s a report showing monthly revenue and expense over the past five years, and projecting revenue/expense for the remainder of the year. That way he can foresee whether her shop will hit its budget numbers and make a profit.

Heine said his in-plant leverages Avanti’s robust reporting functionality. The in-plant makes sure to point out its value-added savings in reports. 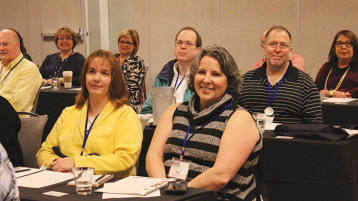 In a session on variable data printing, Alex Podmaniczky (Marist College) and Tom Lydon (Bucknell University) shared examples of VDP projects their in-plants have produced, most of which were previously outsourced.  Podmaniczky discussed how his shop uses PrintShop Mail to produce VDP and showed examples of jobs such as numbering tickets and student award letter booklets with variable images and text. 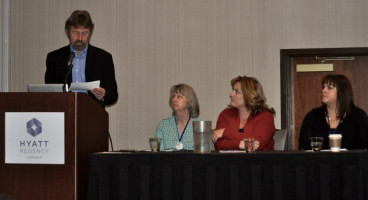 Lydon talked about how XMPie is used at Bucknell, and he showed three examples of challenging VDP jobs that included variable images, text, barcodes, addresses and if/then statements. He noted that the university switched from having one department manage all of the data to a decentralized model in which Admissions, Development and other departments now store their own data. Because each handles data differently, this has impacted the data the in-plant receives and can use. 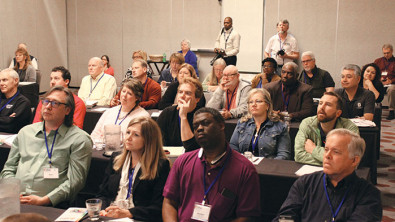 A session on mail center operations led by Art Gerckens (Sacred Heart University) offered some useful ideas. Gerckens detailed his in-plant’s installation of high-density mailboxes (like filing cabinets on rollers) as a space-saving measure. The need to add student mailboxes, which would have taken up some of his valuable space, prompted him to research this solution. The new high-density mailboxes take up even less space — 5,000 mailboxes fit in a 24-sq.-ft. area — giving his shop room to expand its wide-format area.

Gerckens revealed some unique ways he promotes his department. He checks USPS lists of upcoming new stamp releases for any connection to his university and then offers to host the stamp unveiling ceremony on campus, bringing attention to the university. He was able to orchestrate a Paul Newman stamp unveiling, which Newman’s daughters attended, along with local politicians. This made his mailing operation look very good. 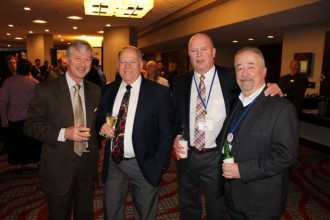 Another service he coordinates is “passport days” when he brings in a USPS representative (at no cost) once a semester to handle passport paperwork and photos for the numerous students studying abroad.

ACUP 2017 wrapped up with a gala dinner and awards ceremony in which 16 in-plants were honored with awards. The recipient of the ACUP Hall of Fame award was former ACUP President Richard Griffin, of Central Piedmont Community College. The ACUP Achiever award went to Donna Horbelt, of UTHealth Houston. Arizona State University’s first place winning piece in the Digital Multiple Piece category was selected as Best of Show. IPG

Next year, ACUP will venture farther west than it’s been in 10 years when the group convenes at Lake Tahoe for its 53rd annual conference, April 29-May 3. 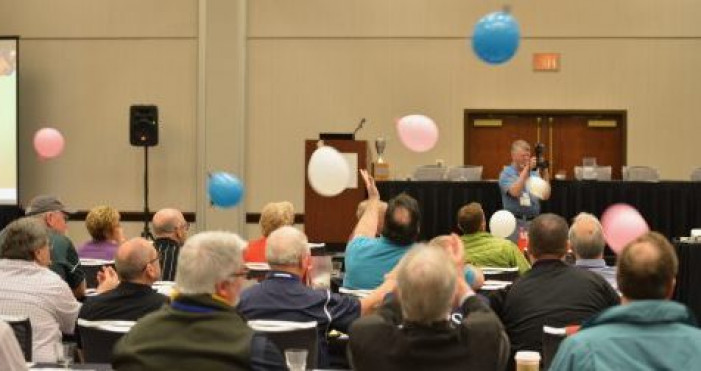 From the Editor: ACUP Reflections

Three New Challenges of the New Normal
END_OF_DOCUMENT_TOKEN_TO_BE_REPLACED
Upcoming Webinars
Print Outlook: What to Expect in the Year Ahead