Staying True to its Mission

“With being located inside of our company’s building, we have close contact with all levels of management so we’re able to collaborate with them when we’re doing strategic planning,” explains Ken Schanuel, director of Production Services.

Having its own in-plant not only makes a difference for the nonprofit organization, but also for its members. The organization offers more than 400 print and multimedia products in its online store. Nearly half of these are produced on demand and shipped out the same day or the day after. Products include pamphlets, books, brochures, stationery, program meeting materials and tent cards. Since 2007, the team has produced more than 35,000 CDs and DVDs, recording them, adding thermal printing on the face of the disc and packaging them, sometimes with inserts.

As an incentive for members to order printed items through Production Services, prices are kept low. The department can produce everything at cost, which allows the association to price the product accordingly. 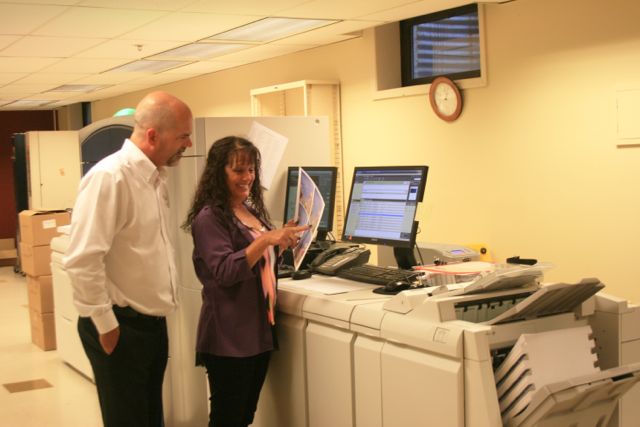 Ken Schanuel and Sheryl Ullrich look over a proof by the Xerox Color 1000 digital press.

When Schanuel arrived at the in-plant in 1988, there were 10 full-time employees. The team operated a few rudimentary pieces of equipment used to produce meeting advertisements, booklets and pamphlets for retail. That equipment included a two-color press, a couple of offset duplicators, a black-and-white copier and an Itek 430 daylight camera to produce film.

Although the team started with a two-color offset press, it now averages less than 50,000 sheets per month over the course of a year on its Ryobi 522HX, which is used mostly for four-color process printing.

Schanuel explains that the majority of Production Services’ offset work happens around the organization’s annual meeting in June. Starting each April, the team begins producing program booklets, meeting materials, posters and other products designed specifically for the meeting.

“As you can imagine, printing four-color process takes a lot longer on a two-color offset press than on a digital press, and with a lot of our products being low-inventory or on-demand, it does not make sense to print on the offset press. The majority of our printing is on digital,” Schanuel says.

To handle its digital work, Schanuel and his team turn to their Xerox Color 1000, averaging more than 130,000 clicks on it per month, though in peak times that jumps to more than 300,000 clicks. 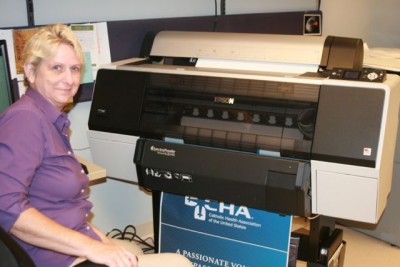 In the past year, Production Services has had a series of approximately nine open houses at the headquarters in St. Louis and at its Washington, D.C., facility. The open houses allow the in-plant to market services available to staff members. Since the events started, Schanuel and his team have seen an increase in staff members using lesser-known services more regularly.

The in-plant has a full-service prepress department that offers archival scanning of old photographs as well as photo editing. Schanuel and his team can also supply some design services, eliminating the need to go back to designers for a small change. It’s the small services, such as low-quantity lamination, perfect binding and collecting scrap paper from members and staff to create recycled notepads that keep staff members coming back to Production Services.

The in-plant is even beginning to provide what Schanuel calls “document collaboration,” a service where it will combine various meeting materials—from Word, PowerPoint or any number of other programs—into one document. The documents created can be complete with an interactive table of contents for easy navigation on a mobile device. “We try to add value with the little things,” Schanuel says.

But adding value isn’t the only thing motivating services at the CHA in-plant; the wants and needs of the members are taken into consideration.

“We still have some members who would rather have something to hold onto in the [annual] meeting rather than use the mobile app that is available,” Schanuel explains. 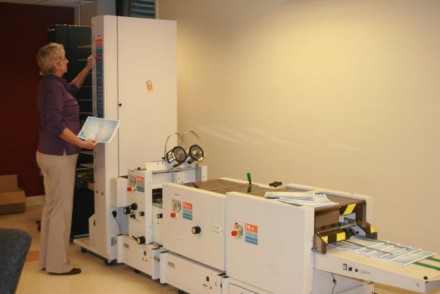 For the members who want to be connected digitally during the annual meeting, the association offers a smartphone meeting app.

In the future, Schanuel would like to see the in-plant add more services. Although the team currently does some basic personalization—changing data on print runs—his goal is to introduce variable data and cross-media communications. He believes that integrating cross-media communication would help to develop an understanding of the types of marketing materials that members prefer to receive.

“I really think variable data would help market the products and meetings that we offer our members, as well as cross-media communication; being able to target a message the way that the customer likes to be advertised to,” Schanuel admits.

Regardless of which services CHA’s in-plant decides to add in the future, Schanuel hits home one key factor in maintaining the success of the in-plant: keeping CHA staff members informed of what can be done at Production Services.

“Just an awareness of what we can do is the biggest asset,” he says.

A Commitment to Sustainability

CHA has made a strong commitment to reducing its environmental footprint. Production Services is working with CHA to move toward recyclable and environmentally friendly options not only for printing, but for its operations as a whole.

“We [the association] put a lot of pride into not only being sustainable in our printing department … but across the board,” says Schanuel. “It’s not just a Production Services initiative.”

At the headquarters in St. Louis, as well as in the organization’s Washington, D.C., facility, an emphasis is placed on recycling paper, cardboard and plastic. The entire organization embraces recycling practices, featuring recycling bins in work and common areas throughout the buildings. In addition: