"Trust your crazy ideas.” That motto has become a driving force for MadLab Technologies, a unique operation at Central Washington University that provides many of the value-added services other in-plants are considering: vinyl cutting, laser engraving, dye-sublimation, and more. As a result, the Ellensburg, Wash., operation has been overflowing with work at a time when other in-plants are slow.

“Right now I’m the busiest place on campus … because we’re filling so many needs,” remarks Manager Michelle Adams, whose willingness to take chances has transformed what was once a custom publishing operation dedicated to course packs into a vibrant shop cranking out everything from vinyl graphics and braille signage to mugs and shirts. 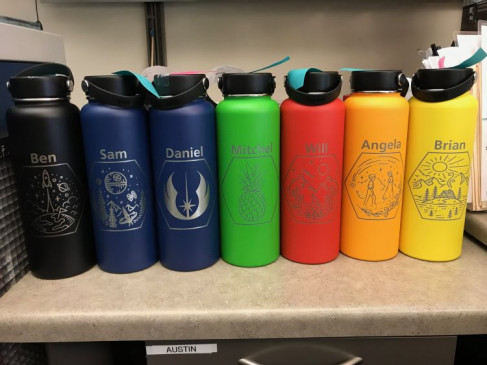 One of the biggest needs right now is clear protective barriers for offices, and MadLab Technologies is perfectly positioned to help, with its laser engraver. Adams initially created prototype acrylic barriers for the bookstore, and when someone from the campus facilities operation saw them and asked about producing more for other campus offices, she said, “I can do that for you.” The departments are now partners on this project, with all university offices required to order barriers through MadLab Technologies to maintain consistency. Though Adams outsources the cutting of the larger barriers, her operation uses its laser engraver to cut .25˝-thick acrylic stabilizers for the portable barriers and attaches them, and then cuts vinyl graphics to brand the barriers or add social distancing instructions.

The shop is also producing face shields with its laser engraver out of a single piece of acrylic that notches in the back. These are only the latest in a long line of unique products being produced by MadLab Technologies, which does all this from a 600-sq.-ft. space in the back of the Wildcat Shop bookstore, with a staff of two full-timers and four student workers.

Though separate from the university’s two-employee in-plant, Wildcat Printing, which Adams considers a close partner, MadLab Technologies provides many of the services other in-plants offer, particularly value-added services. In addition to vinyl cutting, laser engraving, and dye-sublimation, it offers laminating, mounting, and short-run printing and binding.

From Course Packs to Engraving

This is a far cry from its beginnings, when compiling course packs and paying copyright royalties was its main business. The packs were then printed by the in-plant.

As that business declined, Adams saw the writing on the wall and knew her shop would have to diversify. Since it was part of the bookstore, she thought her operation might be able to personalize gifts and other items being sold there, so she started looking at laser engraving machines. 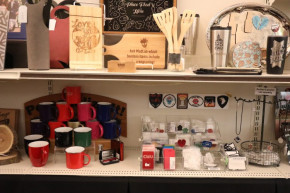 A display of some of the products personalized by MadLab Technologies.

In 2015, the department added an Epilog Fusion Pro with a 32x20˝ table (and a fume extractor to keep the air clear). It’s been busy ever since; by the end of the second year the engraver had paid for itself.

“I’ve engraved everything from a whiskey bottle … to wedding gifts,” Adams says. Metal water bottles are the most popular item to laser engrave, she says, but the shop has engraved glass, leather, wood plaques, rusted metal, acrylic, fabrics, mugs, mirrors, and more.

To promote this service, she initially engraved acrylic coins (which she called “Mad Money”) that could be turned in for free or discounted engraving.

“I walked around campus handing out these coins,” she recalls. Later, she had students hide coins around campus, and promoted a “scavenger hunt” for them on social media.

The next “crazy idea” Adams implemented was dye-sublimation. She acquired two printers — an OKI C711WT with white toner and a Sawgrass Virtuoso SG800 — plus heat presses and began producing mugs, garments, plaques, home décor, and other promotional items. The shop uses an oven to cure multiple mugs at a time.

“Most sublimation is gift-related,” she notes.

One exception is signage, which has been a money-maker for the operation.

“It just expands what you can offer in terms of graphic signage,” she says.

The ROI on this equipment, she says, was only about eight months, including a three-month learning curve.

Having dipped its toes into the engraving pond, the operation realized there were many items its laser engraver couldn’t engrave (e.g., PVC and certain metals and plastics). So, the shop next installed a Max Pro rotary engraver from Vision Engraving & Routing Systems, which can engrave on both flat and curved surfaces.

“We wanted a multifunction machine that does everything from engraving inside of rings and bracelets to also engraving full-sheet stock,” Adams explains.

The shop is using the router to do a lot of replacement signs for campus offices, including braille signage; the machine can drill into the acrylic to create the holes. 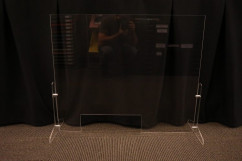 One of the portable protective barriers assembled by MadLab Technologies. The supplier sends the main piece cut to size, and the shop cuts the stabilizers and assembles them.

“We’re able to produce signage for the campus that includes ADA-compliant materials,” she affirms.

Purchased two years ago, the device should reach full ROI in about six months, she says.

The next addition is the one Adams is most impressed with: vinyl cutting.

“I highly recommend adding this to any shop,” she says. “The investment is solid. The equipment, compared to the engravers, is very affordable.”

MadLab Technologies added a 28˝ Titan 3 vinyl cutter from USCutter. It is used to cut lettering and graphics that adhere to walls, windows, and other objects. Graphics touting the “Class of 2020” have been very popular for car windows. The operation also produced a 2x5´ wall graphic for the dining hall.

“If I was a shop looking for a new service to add that you could do economically and yet there’s a really high margin, it would be vinyl printing and vinyl contour cutting,” she advises.

The investment for both machines, she says, can be less than $5,000. And by fitting small graphics onto the unused vinyl on a larger job, the cost can be as low as 25 cents for an item that sells for $7, she says.

“People love them,” she reports.

“We don’t have a dedicated space for each and every [machine],” she affirms. “When we’re working on sublimation, we pull the heat press out. I am the queen of ‘make it fit.’”

What’s next on her wish list? Adams says she wants to add an LED-UV printer to be able to print on rigid materials, including glassware, pens, phone covers, even golf balls.

“In terms of the university, we could do all their promotional items in-house, rather than outsourcing those,” she says. Printing indoor signage would be another of her goals with an LED UV printer.

Adams, like progressive managers everywhere, is always looking for new ways to add value — while keeping university dollars on campus. “I think you just always have to, in the back of your mind, be asking yourself, ‘how do we stay relevant?’” she concludes.