With a lifelong interest in printing, Debbie Cate has built a multi-faceted in-plant, adding services and staff to better serve the organization.

Not everyone knows what they want to be when they grow up. However, for Debbie Cate, the managing director for Texas Tech University Health Sciences Center General Services, pursuing a career in print has been a lifelong passion. 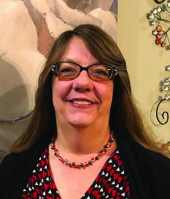 Born and raised in Lubbock, Texas, Cate wanted to be a commercial artist and decided to participate in DECA in high school, through which her days were split between classes and a job. The closest opportunity she could find was working for McKee Wholesale, a small warehouse that supplied drugstores with everything from cigarettes and candy to electronics. She produced a monthly 50-page book of ads for everything the stores could order.

“We used product slick sheets, where you cut out the image size of the picture you wanted to use. Back then [in the ’70s and ’80s], you didn’t have copiers to size and reduce,” says Cate. “I’d put in the type and put together ads, then turn around and print the book and do bulk mail. It was a constant cycle; I’d spend a couple of weeks laying it out, a week printing it, and a week [preparing it for bulk] mailing.”

Cate stayed with McKee Wholesale for five years until she saw Texas Tech University Health Sciences Center advertising its first-ever printing and bindery position. She joined a small team of two press operators, a supervisor, a student assistant, and an office manager who handled mailings.

“When I started here, they had just bought their first two-color press to start bringing letterhead in-house,” she says. The in-plant had also just gotten metal plates, so Cate learned how to strip negatives, shoot film, and create plates.

“I still ran an offset press; it was the Multilith for the most part — all the stuff that’s not made anymore,” she says.

Over the years, Cate strove to work her way up in the in-plant. Her biggest opportunity came when her eventual predecessor mentioned his pending retirement.

“He said if I had hope of getting his job, I needed to get a degree, and that his retirement would be about four years away,” she says.

While working full time, Cate earned her associate’s degree in general business at South Plains College before transferring to Wayland Baptist University, graduating in 2007 with a Bachelor of Science in Occupational Education. In total, she completed her education in three and a half years, and ultimately assumed her current position with the Health Sciences Center in-plant.

As her career has grown, so has the in-plant. With an annual printing budget of $1.95 million, the printing operation occupies 10,066 of the General Services department’s 18,567 sq. ft. General Services now has 37 employees. Since Cate has assumed her role, the number of on-staff graphic designers has increased from one to four. The in-plant started selling promotional items in 2016. From light-up pens and pencil holders to tape measures and yardsticks, the in-plant hands out promo items at the annual Texas Tech employee picnic to market its capabilities.

Adding the PressWise print workflow system, she says, has led to the shop’s most significant improvement, with its capabilities of estimating, proofing, routing, impositioning, and more.

“On a lot of our orders with business cards, the first person who touches it is the press operator,” she adds.

An Architect on the Side

If Cate weren’t in printing, she would have been an architect, and she was able to showcase this second passion when she got the opportunity to redesign the print shop and loading dock in 2014. Using Microsoft Vizio, she figured out the workflows, placed the equipment, built walls, and added square footage, saving her work as a CAD drawing for the architect.

“That was neat, getting to see my vision,” she says, referring to this as her “legacy” with the in-plant.

Of course, she says some of her vision has changed as the in-plant continues to update its equipment. It is now almost completely digital. In addition to a Colex automated cutter, its latest acquisition is a Mimaki JFX-200 flatbed printer. Installed in June, Cate says it is primarily being used to print on acrylic, including COVID-19 wall and floor graphics, police department badges, and printing the Texas Tech double T logo on flash drives.

The in-plant is also currently seeking the right of first refusal, for which Cate says it has a great deal of support. It would be a presidential policy requiring everyone to check with in-house service units before procuring outside services, and would apply to other service units beyond the print shop.

What makes Cate most proud of her operation are the people and their limitless creativity. She’s particularly excited to see their latest project come to fruition — producing masks for the large dinosaurs on display at the Museum of Texas Tech University.

Recognizing these efforts and engaging staff is a top priority for both Cate and the institution. Last September, she gathered the entire department, including her boss and his boss, for a party that incorporated a speed dating-esque dynamic, allowing everyone in the printing shop to get to know the rest of the department one by one. She also set up a corkboard bulletin board for each staff member that displays their interests and allows supervisors to leave thank you notes.

Succeeding in A Male-Dominated Industry

Her printing journey over the years, however, has not been without its challenges, particularly in a predominantly male industry. When Cate had been promoted to supervise the bindery department, she says a male employee quit because he refused to work for a female.

Despite this instance, she says she continues to see progression in the right direction, with the university’s Health Sciences Center having its first female president, along with a female CFO, both promoted from within.

Her biggest challenge as a manager, she says, has been navigating COVID-19. “We are a health sciences center connected to a hospital where COVID patients are actually being treated,” she says. “It’s balancing that and trying to get people encouraged to come to work. My receiving and mail departments were deemed essential so we could not close.”

Though she had several printing staff willing to come in, print volumes were low, especially jobs tied to events. The in-plant would let orders collect for a few days, then come in and complete all of them, with Cate and her assistant each running crews that would alternate to limit exposure.

In her free time, Cate, a mother of two and grandmother of four, says she loves to read everything from mysteries, to suspense and romance novels. She also enjoys sewing or crafting and is not afraid to tackle a challenge.

“I love figuring out puzzles or how to accomplish a task, from a sewing project to home improvement,” she says.

What Cate admits she is afraid of, however, is falling.

“I don’t ride roller coasters, or like to stand close to a window of a tall building,” she says. “I am terrified to walk across scaffolding and don’t like open staircases.” Given this information, it might be shocking for some to learn she’s gone skydiving twice.

Though Cate is concerned about how COVID-19 has impacted what people will print moving forward, she remains optimistic about the near future, and thinks events will eventually come back bigger and better.

“I think this is a going to be a turning point for printing,” she says. “There will be a market shift like when we went from continuous-feed forms to single sheets.”

Whatever the future brings, she’s ready to embrace it, continuing her lifelong passion.

“I absolutely love my job,” she says. “It’s always different every day.”