Though its Kodak NexPress ZX3300 digital color press has been up and running since January, Texas Tech University Health Sciences Center’s in-plant took its time rolling this new capability out to customers.

“We wanted to learn all of the ins and outs and what we can do and what we can’t do,” remarks Debbie Cate, managing director of General Services at the Lubbock-based university.

With brand new features like Kodak Dimensional printing along with gold, white and clear dry ink, the shop wanted to make sure it had mastered these processes and worked out all the kinks. 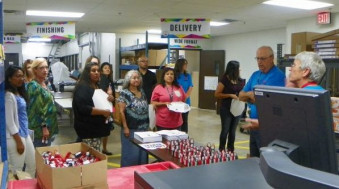 Late last month, the 13-employee printing center formally introduced them at an open house, during which all of the NexPress’ capabilities were demonstrated. In addition, designers were invited to a lunch-and-learn session to find out how to design jobs using these special flourishes. So far there has been a lot of interest, Cate says.

“At the university level, everybody’s always trying to do something to make [their pieces] stand out,” she notes — and the 3D tactile effect of Dimensional Printing and the other fifth imaging unit solutions certainly do that. The Athletics department and others are eagerly considering the possibilities, she says.

Texas Tech’s colors are red and black, Cate notes. Being able to print, for example, a gold seal on top of those colors creates a very eye-catching effect.

“Printing color ink on top of the black or red background, that’s just so impressive,” she affirms.

Another key feature of the NexPress is the long-sheet feeder, which lets the in-plant run 14x39˝ sheets. 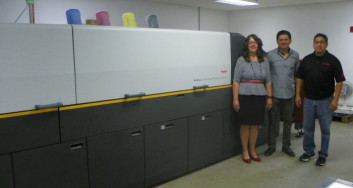 By ganging up jobs on larger sheets, the Texas Tech University's in-plant has increased its productivity far beyond what its previous printer, an HP Indigo 5500, could do.

When planning this upgrade, Cate says that the Xerox iGen was also a contender.

“We really looked hard at the iGen and the NexPress,” she says. “We just really felt like the NexPress offered more versatility and features that our clientele would really go for.”

Cate is especially pleased at the speed of changeover of the fifth unit solutions.

“Changing out the fifth station is so easy — 10 minutes, start to finish,” she remarks. “So we can go back and forth from Dimensional to white to gold really quickly.”

Justifying the cost of the NexPress was not a problem, Cate says. She had been planning the upgrade for a while so the in-plant had built up the funds to pay for it. So far, she adds, the press is exceeding her ROI projections.

“My ROI is coming in a whole lot faster than I projected,” she reports.

Cate had estimated a four-year ROI. “I may actually pay it off in two,” she reveals. “And I reduced prices at the same time because it’s cheaper to run.”