Like any school district, Deer Valley Unified School District (DVUSD) spent a significant amount of its financial resources to purchase textbooks. Five years ago, in an effort to reduce this spending, the Phoenix-based district challenged Martin James, manager of Graphic Communications, to employ innovative thinking to help the district maximize its education dollars. 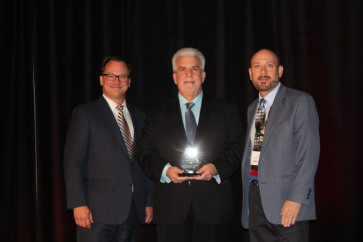 He was asked to develop an online digital curriculum solution that would allow every teacher at all 38 campuses to order math, reading and science curriculum. Each teacher would need access to order their curriculum on a quarterly basis.

The in-plant’s successful implementation of this program, which resulted in several million dollars in savings, earned Graphic Communications the 2017 Innovation Award from the In-plant Printing and Mailing Association (IPMA). James accepted the award during the IPMA conference in Pittsburgh last month.

“Upon learning we had received this award, I was immediately filled with pride that my team had won such a tremendous honor,” says James. “The team was at lunch when I learned we had won this award and I couldn’t wait for them to return so I could share the news. I told them how proud I was of their dedication and hard work because they are the reason for our success. I am so honored to receive this award.”

To cut costs, the district utilizes royalty-free curriculum instead of high-priced traditional textbooks. These materials are printed in the Graphic Communications Department on Xerox D125 and Xerox 4127 printers and then three-hole punched for students’ three-ring binders. This process not only saves the district money, but also spares teachers from having to copy their own lessons.

Using its EFI PrintSmith MIS software Graphic Communications records the number of curriculum job tickets and impressions on a monthly basis for all 38 campuses and analyzes that data every month. At the conclusion of fiscal year 2015-16 the analysis of the first four years of program data indicated that DVUSD Graphic Communications had produced 64,605,192 impressions, representing a 1,016% overall increase in curriculum impressions. An estimated several million dollars had been saved by not having to purchase traditional textbooks. Teacher prep time saved is estimated to be more than 21,500 hours, which has allowed teachers to dedicate more time to lesson planning rather than the production of lesson materials.

DVUSD’s mission is to “provide extraordinary educational opportunities to every learner.” Graphic Communications has a similar mission: “Deploy a guaranteed and viable curriculum in every classroom.” Through this program, the in-plant has succeeded in that goal.

Recently, the in-plant signed agreements with two other school districts to produce and deliver on-demand curriculum products starting in July.

IT'S OFFICIAL!!! We have been named the 2017 Innovation Award Winner by #IMPA2017 We are so honored. Thank you!!! @DVUSD pic.twitter.com/6ajLlhOVJP

Three New Challenges of the New Normal
END_OF_DOCUMENT_TOKEN_TO_BE_REPLACED
Upcoming Webinars
Print Outlook: What to Expect in the Year Ahead