For the Deer Valley Unified School District (DVUSD), success can be measured in several different ways. Not only has the Phoenix-based K-12 in-plant seen an increase in revenue, it has also experienced a major increase in the number of impressions it produces — for both internal and external customers.

Martin James, manager of Graphic Communications, notes that in just the last year alone, revenue for the in-plant was in excess of $1.1 million, an increase of 22% for its internal work, and 26% for the external jobs the operation handles. 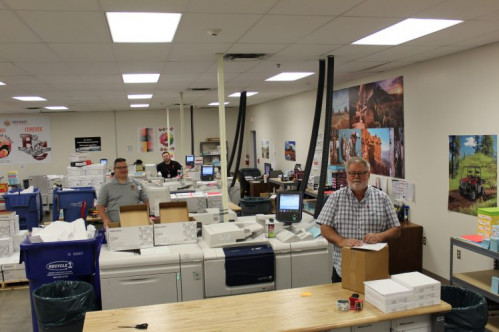 From left: Gene Faken, Erik Hackenschmidt and Kevin Ahern handled the production of more than 30 million impressions for the curriculum program last year.

Part of the reason for such strong success — although certainly not the only reason — is a digital curriculum program the in-plant started in its 2012/13 fiscal year, which runs from July to June of the following year. That program led to the in-plant receiving the 2017 Innovation Award from the In-plant Printing and Mailing Association (IPMA), and more recently the program was honored with the 2019 Best Practice Award from the Arizona Association of School Business Officials.

The aim of the program is to save both time and money by eliminating the need for the districts to purchase expensive textbooks every year, or to have teachers standing around copiers making their own course packs for students.

“We are saving our districts millions by not having to purchase those hard copy textbooks,” reports James. “And I’ve seen the reports about how much we’re saving on a campus level, with estimates at around $2 million per year in teacher salaries where they were just standing at a copier.”

Now, he points out, that time is spent in planning, helping students, grading papers — the true tasks of teaching, rather than standing around trying to produce the materials they need for the lessons. 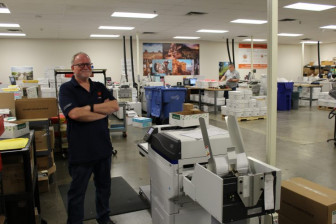 “The other thing is that we can update the curriculum on a yearly basis,” James continues. “We are nimble and agile enough to update all the PDFs for the next school year, giving teachers the latest versions.”

The way it works is that each teacher is given his or her own user name and password, which are used to log into the in-plant’s systems, powered by PrintSmith MIS software. There, teachers can order by grade, subject, and semester. Materials are delivered in sets that come with holes pre-punched so students can insert them into three-ring binders.

“Then they own it; it’s theirs to highlight or take notes,” says James.

The district has found that high-performing students are keeping their materials to refer back to in later years, he notes, and some parents have even started reaching out to request copies of the following year’s curriculum for their children to get a head start over summer breaks.

“They can purchase that from us as a service,” says James. “It’s a pretty unique program.”

Right now, James notes, every DVUSD school has switched to the digital curriculum program, but the in-plant has also started offering it to other districts in Arizona, as well. Already, 10 of the 48 districts the in-plant counts as clients are using the program.

“They all have access to it, and they are given the full rights to use it,” says James.

“We only market to other school districts, and nonprofits connected to the schools,” stresses James. “We don’t market to the public, to retail, etc. I owned an AlphaGraphics before, and the last thing I want is an in-plant going against their competitive advantage. So I don’t.”

That approach is helped by the fact that Arizona, says James, has some of the toughest laws in the country when it comes to procurement, with districts and individual schools alike needing to be exceedingly careful to always be in full compliance. That is where DVUSD has carved out a niche, making sure it is always current with the regulations and requirements, so the districts it serves can, in turn, trust that the materials they receive will always be correct. 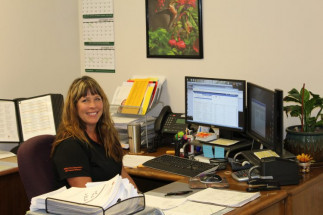 Shelly Bates processes all curriculum orders for the DVUSD in-plant.

“We do everything in the printing world,” says James, “from business cards, to the curriculum program, and even wide-format printing. Anything that pertains to print, whatever their needs, we can fulfill. And if I can’t accomplish it in-house, I look to wholesalers in our industry and farm it out, mark it up, and sell it. We don’t touch anything that doesn’t have a profit involved.”

James doesn’t just rely on work waltzing through his doors, however; he runs the in-plant like he would a business, and that includes doing regular marketing. Word of mouth and in-person networking events have proven to be his greatest tools; James notes that there are four state associations whose conferences he makes sure to attend and have a booth or presence at every year, including Arizona School Business Officials Assoc.; Arizona Rules School Assoc.; Arizona School Board Assoc.; and the Arizona Superintendents Assoc.

“I go to their conferences and meetings, and I make sure to keep our brand in front of them,” James says. “Over the past five years that strategy has paid off. A lot of them don’t go to any conferences but their own, so this allows us to cross into all of the areas.” In time, he notes, he hopes to capture at least some, if not all, of the print work for every school district in Arizona.

Another secret to James’ success in growing the DVUSD in-plant is that he collects a lot of data. “We track both internal and external revenue sources,” he notes. “We track total impressions, on-time deliveries, redos — everything.”

In fact, the in-plant has a 99% on-time and accuracy rate (no one is perfect in the print business, James explains). He believes the way the in-plant handles the occasional hiccup and makes it right is yet another way he can ensure his operation stands out from the crowd. He does all this with just eight employees — including James himself — along with the occasional part-time help during the busiest summer production months.

The Capacity for Growth

With the growing success of the in-plant operation, James notes that he is in the process of expanding the shop’s black-and-white capacity, with six new devices set to be installed in the coming weeks, bringing his total to 13 such devices.

“We had to bring in $25,000 worth of new electricity in here first,” James says. “We had maxed out the power. That was just finished, so next will be reconfiguring the space and getting the drops on the floor.”

While the digital curriculum program is driving the black-and-white volume increases, the in-plant also operates a digital color press from Xerox; two 64˝, 10-color solvent wide-format devices; a 36˝, four-color aqueous device; and an Intoprint MP200 digital envelope press, which is one of the newer services the in-plant has added. The shop also has a full finishing operation.

“I am looking forward to having the new black-and-white equipment,” says James. “We had reached peak production capacity, and I had to be careful about what new work I could keep bringing in. Now I feel a lot more comfortable taking on more work, without concerns about producing it on time.”

He notes that the wide-format and digital color work are both growing as well, but at a slower pace, with current equipment keeping up with the demand thus far.

“I can still get a lot more impressions per month on both,” says James, although he also notes that one of the few areas he hasn’t tracked as closely is which jobs are going to which technology. He plans to start paying more attention to that to ensure he has the right number of people and equipment to handle the work as the in-plant continues to grow.

The success of DVUSD isn’t a fluke, or something that is unique to the operation or the K-12 market that it serves, notes James. In fact, he advises other in-plants — of all types and sizes — to first and foremost brand their services.

“Market to your customers, both internally and externally,” he says. “Live up to your promises, deliver on-time and accurate work, and when mistakes do happen, it’s how you respond that sets you apart.

“Be aggressive going after the business,” he continues. “Don’t wait for it to come to you. Too often in in-plants, because we’re not in the position of needing to make payroll like in the private sector, we get complacent. You can’t do that. Get aggressive. There is someone out there ready to take away your business at any time — they can have any of the same printers, they can do facility management, and you can be out of a job. You’re only as good as your last year, so go out, go after the business, or someone else will.”