When Elon University Print Services’ seven-year-old digital envelope printer sputtered and died a few months ago, Manager Wesley Grigg never considered getting out of the envelope printing business for a second. The five-employee in-plant prints more than 300,000 envelopes a year, and brokers out another 100,000 long-run envelope jobs.

That’s more envelopes than the university was printing before the in-plant added its Xanté Ilumina Digital Production Press in 2012. 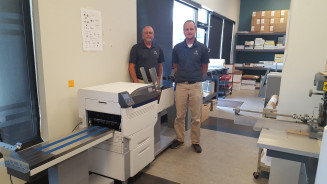 “We’re just mailing more,” explains Grigg, who notes an uptick in marketing materials for the private liberal arts university based in Elon, N.C.

So when the Ilumina went down and he realized it would cost too much to fix it, Grigg immediately started gathering data to justify a new envelope printer.

“I went through a year’s worth of envelope orders,” he says. He got quotes for this work from outside printers and created a spread sheet to show the savings the in-plant would bring with a new envelope printer.

After getting approval, Grigg brought the shop’s own envelopes to test printers from Xanté, OKI and Riso. Even though he was quite pleased with the old Ilumina, and especially the free iQueue 7 Ultimate prepress workflow software that accompanied it, he found that he preferred the OKI C931e. He felt the paper path was straighter so it would have fewer feeding issues and jams. Unlike his old Ilumnia, which fed from the top, the OKI is a bottom-feeding device.

The 50-ppm OKI was installed in April, with EFI Fiery color management software, and Grigg has been impressed with its performance.

“The colors are coming out spot on,” he praises.

The OKI C931e uses high-definition color technology to produce deeper, more saturated colors and finer detail at resolutions of 1,200x1,200 dpi. It can print on a range of media — not only envelopes but polyester, transparent film, magnetic media and heavy stock up to 360 gsm. It can handle anything from 3x5˝ cards to 52˝ banners.

Having the ability to print envelopes and stationery in-house, Grigg says, has moved customers away from a print-and-store mentality and encouraged more short-run print-on-demand orders. The university used to print its stationery in large runs of 30,000 or more and warehouse it, he says.

“We do all of those on demand now,” he says.

The shop is currently printing a run of 10,000 envelopes for Admissions, though it’s being done in stages.

Grigg expects a very short return on investment for the OKI. He paid less than $20,000 for the printer and Fiery software and says it will pay for itself by the end of August.

Wes Grigg: From 'Just a Job' to Dedicated Printer