Offset volume has been slowly declining at The Print Shop, Carleton’s 12-employee in-plant in Ottawa, Ontario, and Kelly was looking for a way to make up some of those losses. Being able to provide campus signage printed directly on rigid substrates like Coroplast and foam core seemed the perfect solution. 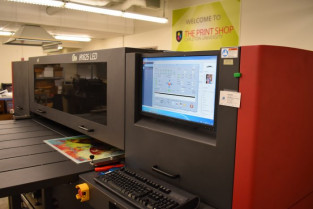 “The print industry is changing,” notes Kelly, “and I think we need to be dynamic along with it, and just look at what’s the market looking for right now. This seems to be an area that’s expanding within the industry.”

The in-plant had an aging 42˝ Epson rollfed printer, but it was “very slow” by comparison, Kelly says. Plus, prints had to be mounted on foam core, an extra step.

“We were not able to do any outdoor signage because our Epson printer was water-based ink,” she says.

As a result, that work had to be outsourced. The new 65˝  EFI H1625 LED will allow the in-plant to keep this work in-house.

Beyond that temporary signage, however, Kelly saw an opportunity to produce permanent signs for campus buildings.

Printing these signs in-house was, frankly, a new concept for the university to digest, and not everyone was convinced the in-plant could do it. Facilities was “a bit skeptical,” Kelly says.

After some high-level discussions, she invited Facilities to the shop for a live demo of the EFI H1625 LED printing signage on clear plexiglass. By printing in reverse on the back of the plexiglass, topped with a layer of white, signs have a 3D look when viewed through the substrate. She stressed the cost savings the in-plant could bring to the university, which could be as much as ⅛ of what was being paid to outside vendors.

While the decision is being made, the in-plant is moving ahead with other opportunities. At a November open house, it showed off the flatbed printer’s capabilities by wrapping doors and printing window and floor graphics. Kelly sent some employees to a two-day workshop to learn how to wrap vehicles. She envisions a lot of new projects once the campus becomes more aware of the printer’s capabilities.

To make space for the new hybrid flatbed device, the in-plant sold off one of its two-color offset presses. It still has a four-color Heidelberg, a two-color Hamada and a two-color A.B. Dick with an envelope feeder.

Four staff members have been cross-trained to run the EFI H1625 LED, and Kelly says they picked it up quickly, thanks in part to the fact that it uses the same EFI Fiery IC-415 software that runs the shop’s Konica Minolta digital printers. She emphasizes that the printer requires daily maintenance.

“The heads need to be cleaned every day,” she says. “You really have to be dogmatic about doing that.”

Thanks to the two LED lamps, printed pieces come out dry and ready to ship. Overall, Kelly has been very pleased with the new printer, and encourages other in-plants to consider this technology.

“It’s important for in-plant shops … to come up with new revenue streams and look at where their institutions might be outsourcing,” she says, “and try to plug that hole so they can get the business back in.”

Three New Challenges of the New Normal
END_OF_DOCUMENT_TOKEN_TO_BE_REPLACED
Upcoming Webinars
Print Outlook: What to Expect in the Year Ahead