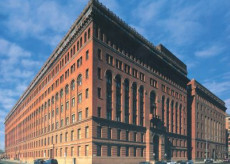 The U.S. Government Publishing Office (GPO) opened its doors on March 4, 1861, with 350 employees. Since that day, GPO has printed, published and disseminated information for the three branches of the federal government. The sheetfed printing portion of the in-plant was made up of a fleet of Heidelberg offset presses — until the recent installation of an RMGT 9 Series press with LED-UV curing.

For the GPO, there are a host of benefits to having an RMGT press. First and foremost, it gives the shop a more environmentally friendly option. Since sustainability is a major concern, having a press with the LED-UV curing technology lowers energy consumption leading to reduced CO2 emissions. Other benefits include significant savings to the shop, allowing them to run a 24x36˝ sheet but still produce 4 over 4 finished products. The paper savings alone will give the GPO a cost advantage on many of the jobs it produces.

At drupa 2016, representatives from the GPO stopped by the RMGT (RYOBI MHI Graphic Technology) booth to see the 8-color Series 9 running. They were “sold” on the LED-UV technology, and that began a process of discovery to see if the press was truly a good fit.

G.E. Richards set up visits for the GPO senior management team to go to shops around the United States to see how the presses were fairing in real-life situations to compare it to the other presses that were being considered.  They did a number of site visits in the G. E. Richards Graphic Supplies, the RMGT distributor for the Northeast territory, but they also visited sites throughout the Graphic Systems North America distribution network, allowing them to see the press operating in a wide range of situations, and producing a variety of different types of jobs.

“Ultimately, the features were all there,” said Jim Lundy, Sales Manager for G. E. Richards Graphic Supplies. “RMGT doesn’t take a back seat to anyone on printability, reliability or features, and we have a history of using LED technology for 11 years. That gave the GPO a high level of comfort with the technology, which was a key factor in the GPO deciding on the RMGT after extensive evaluation as part of the RFP competitive procurement process.”

The RMGT 9 Series press adds further capacity at the GPO, which produces a tremendous print volume annually. The RMGT 9 Series press has been successful in running all levels and classifications of print quality. It is a testament to the press and the technology that nothing the GPO could throw at it is off limits. According to Lundy, the GPO is extremely pleased with the press and the LED-UV technology, and he is hoping the relationship will continue to be beneficial for both the GPO and RMGT for many years to come.

Heidelberg to Debut Most Intelligent Speedmaster Yet

From the Editor: Offset Versus Inkjet
Comments
COVID-19 Resource Channel