Graph Expo served as a meeting place for in-plant managers. Here’s a glimpse of what they were looking at on the show floor and a review of the educational sessions they attended.

A panel of Xerox users shares ideas for a packed room full of in-plant managers at IPG’s second in-plant breakfast.

In-plants were out in force at Graph Expo 2015 last month. IPG spoke with dozens of them: on the show floor, at various in-plant events, even out on the streets of Chicago.

By all accounts they were glad they attended this year. They got ideas for new services, compared and contrasted equipment from different vendors, sat down for demos of workflow and web-to-print software and got together with other in-plant managers at educational sessions. For some, the chance to network with other managers was the highlight of the show.

“I enjoyed the show tremendously; it was like being with ‘my people,’ ” remarks Catherine Chambers, director of Print & Mail Services at Alfred State, who brought two of her staff to Chicago. “We attended Graph Expo to explore options for expanding services, meet with vendors and to attend in-plant sessions.” 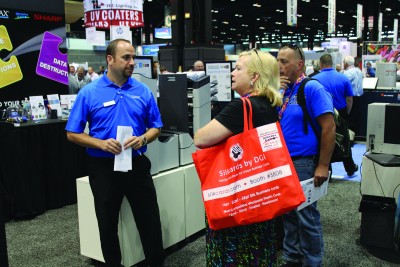 In-plant managers were everywhere at Graph Expo. Here, Catherine Chambers, director of Print & Mail Services at Alfred State, stops
for a chat at the Formax booth.

And there were plenty of in-plant sessions. IPG hosted three of them—two breakfasts and a lunch. The In-plant Printing and Mailing Association (IPMA) hosted a lunch. And several seminars in the show’s educational program focused squarely on in-plant topics.

“The special presentations and breakout sessions were top notch,” remarks Tim Hendrix, Oregon State Printer, who not only attended IPG’s events but led a seminar of his own covering hot technology trends.

"The seminars were very informative, and it was great linking up with fellow print managers to swap stories," adds Curtis Ebdon, director of Design & Digital Print at
Fairfield University.

As for the show floor, managers were both excited and disappointed. There were fewer vendors this year, and some lamented that key technologies were missing.

“If you believe offset is dead—which I don’t—then the show confirmed your suspicions,” notes John Sarantakos, director of Printing, Mailing and Document Services at the University of Oklahoma. 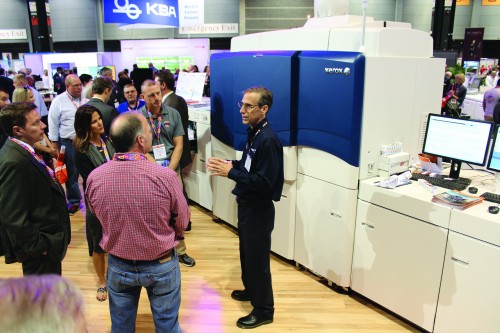 A crowd gathers around the new Xerox iGen 5.

While many niche and specialty solutions were represented, says Penn State’s Abbas Badani, production inkjet—the talk of the industry—had a “very limited display.” He was disappointed with the lack of cut-sheet inkjet presses. Canon’s new Océ VarioPrint i300 cut-sheet inkjet press was not actually at the show but was demonstrated only via video. (It was shown at Canon Expo the week before.)

“In general, the show lacked any ‘wow’ factor,” observes Sarantakos.

Still, many managers were there on a mission, and valued the opportunity to compare different vendors’ equipment.

The new Duplo DC-746 slitter/cutter/creaser garnered a lot of interest from in-plants.

"I didn't run out of things to see or investigate in the two days I was there," remarks Ebdon. "The Xerox Rialto 900 inkjet [press] was probably the most fascinating piece of equipment I saw."

“Where else can you see equipment that does similar things that’s built and sold by four different companies?” wondered Steve Priesman, manager of Printing and Publications at Omaha Public Schools. “You can compare and contrast so easily. Where else can you talk to staff from your current vendors and troubleshoot issues or learn different ways of doing things.” 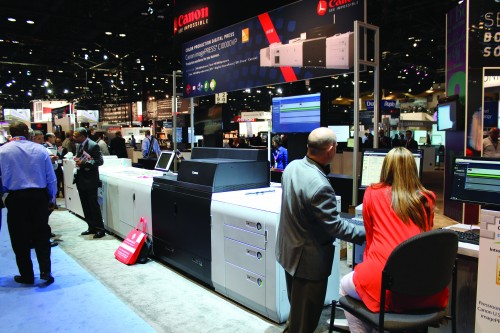 Canon introduced the imagePRESS C10000VP, which prints 100 pages per minute on stocks up to 350 gsm.

He was there to look at coil binding systems, compare Duplo and Standard equipment and ask questions about workflow to Xerox and EFI.

Some felt attendance was down this year. Others saw it differently.