It wasn’t a lack of interest that kept the State of Oregon’s Publishing & Distribution operation from adding an inkjet press.

“I’ve been looking to switch over to inkjet for years,” proclaims State Printer Tim Hendrix. “I just couldn’t get the numbers to work.” 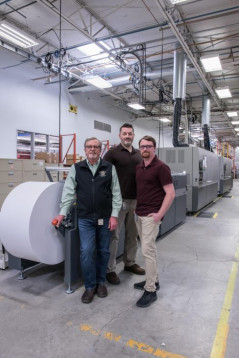 Hendrix has been monitoring inkjet technology for six years, and even sent an assistant to the 2018 Inkjet Summit to get the latest information on the technology. But at the time he felt the equipment cost was too high, the output quality was too low, and the maintenance requirements (such as head cleaning) were too much.

As time went by, though, being the only large state government in-plant without an inkjet press began to have an impact.

“To see the other government in-plants out there shift over to inkjet just pushed me even further,” he says.

“That is going to help us considerably, and save quite a bit,” Hendrix says. 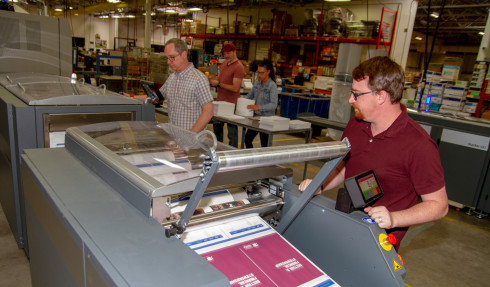 The press has been busy since installation, and he is quite pleased with the quality of the output.

“I look at the inkjet [prints] with a loupe and I’m just blown away by the quality,” Hendrix enthuses.

This was definitely not the case when he first looked into inkjet years ago. The speed of the VC60000 is impressive, he says, the workflow is more efficient, and thanks to technology upgrades, the need to clean the heads after a period of inactivity is alleviated. 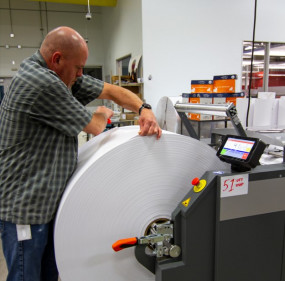 Operator Artie Richardson takes a roll off of the Tecnau Rewinder r9.

“Being able to park all the color heads and just use the black heads was a definitely plus factor,” Hendrix says. That’s because the in-plant still prints a lot of monochrome work. But having the ability to add inexpensive color to some of those traditionally black-and-white jobs is exciting.

“The full-color upgrade is going to be a real boon to what we can do here,” he says.

The Department of Human Services, for example, has added color to its mailings. Instead of outsourcing high-volume color jobs like this, the in-plant can now do them in-house.

“It’s going to be really cost effective for the customers and for us to offer this type of color,” he says.

The in-plant has also run full-color spiral-bound publications for the Department of Education, and the shop is looking for other previously outsourced work it can bring in-house. So far, Hendrix says, 40% of his operation’s work has migrated to inkjet.

Joe Verardo (left) and Tim Miller examine a page being printed on the new press. The quality of the inkjet-printed output is excellent, says State Printer Tim Hendrix.

Most of this work is 8.5x11ʺ mailers, such as unemployment claims, Medicaid mailings, DMV notices, and other transactional materials.

“By ganging these together and cueing them up, we can keep the machine constantly running six hour a day,” he says.

This ganging up of similar jobs requires an adjustment in mindset at the shop, but is a necessary workflow change for inkjet. For example, instead of running jury summons notices on 90# tag stock for different counties as they come in, they will now all be done at the same time on the VC60000 for maximum efficiency.

The inkjet press requires fewer operators than the shop’s previous printers; two people can output the same amount of work that it previously took seven to print, Hendrix says. 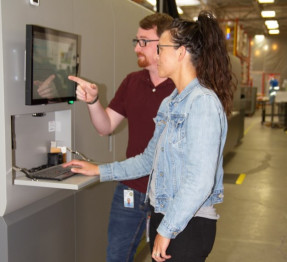 Josh Stone (left) and Madison Evans stand at the main console of the Ricoh Pro VC60000.

“It doesn’t mean we’re going to be suddenly reducing staff,” he hastens. Everyone will be trained to run the VC60000 but will be deployed wherever they are needed.

“We still run cut-sheet here, and we’re going to continue to run cut-sheet,” he says. In fact, the in-plant also recently upgraded its cut-sheet printers, adding eight black-and-white Ricoh Pro 8320s, plus two color machines: a Ricoh Pro C9200 and a C9210. Several of those digital presses have in-line Plockmatic square-back binders. A Ricoh Pro C5310S was also added in the in-plant’s secure satellite location at the Department of Justice.

Sourcing paper rolls for the VC60000 has been a challenge for Publishing & Distribution as it has for in-plants everywhere. The press uses about eight rolls a week, printing 100,000 to 200,000 impressions many days, for an average of 4.6 million sheets a month. One day in April, Hendrix says, the inkjet press printed more than 1 million impressions for a mailing.

“I’m on weekly calls with paper mills to try to get the pulse of what’s going on,” Hendrix says.

Though he’s pleased with the VC60000 and the benefits it is bringing, the installation process was not as smooth as he had hoped, despite his preparations.

“We did all our up-front due diligence on that, only to still come up with some problems,” he says. “We had power issues, we had connectivity issues.” Shop humidity levels are not as ideal as his research predicted, so he’s looking into upgrades.

He advises anyone looking at an inkjet press to be prepared for such issues to arise during installation, and do as much homework as possible.

“Make sure the facility can support it,” he says.