Most companies are lucky to have one in-plant. But after a merger with MeritCare in 2009, Sanford Health — one of the country’s largest integrated health care systems — ended up with two of them: MeritCare’s in-house printing operation in Fargo, N.D., and its own in Sioux Falls, S.D., 240 miles south.

That may have been too much of a good thing, though. 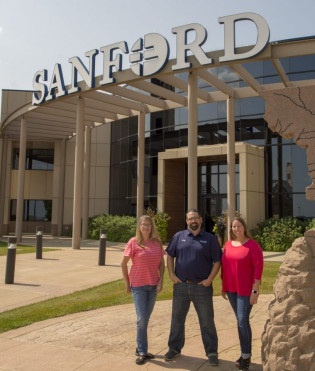 “We had a duplication of effort,” remarks Lisa Stelter, Print and Mail Services manager.

With 23 employees between them, the two operations had a lot of redundancy in their offset and digital press capabilities. There were times when staff at each facility had very little to do.

At the same time, the distance made it difficult for Stelter to ensure brand consistency of the output between locations.

The two in-plants were ripe for consolidation, but doing so would require a printing technology capable of handling the combined volume of two operations, while cutting costs and adding speed. Inkjet was the answer, Stelter determined — specifically, the Océ VarioPrint i300 cut-sheet inkjet digital press.

“Truly doing more with less was ultimately my goal, and getting the i300 has allowed us to achieve that,” she says.

The press was installed in March 2018, at the same time that the two facilities were consolidated in Sioux Falls. Sanford Health Print and Mail Services now produces approximately 1 million impressions per month in one eight-hour shift with the Océ VarioPrint i300 (with a peak monthly volume of 1,162,420 impressions in June). Total impressions on the i300 in its first four months of operation were 3,795,670. The inkjet press has an uptime of between 90-95%, Stelter says.

“Literally, that machine does not stop,” she emphasizes.

It cranks out high volumes of patient education materials, variable data mailers, forms, brochures and more. The in-plant even repurposes calibration sheets and wrinkled or imperfect pages ejected by the press’s Sentry unit into notepads.

“We have zero waste that comes off of the i300,” Stelter proclaims. 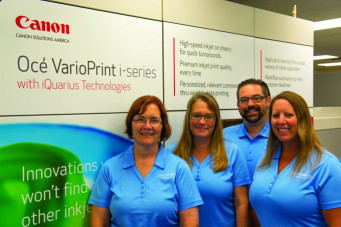 The in-plant has moved 60% of its offset and digital work to the inkjet press, bringing savings and efficiency to the company. From left: Carol Schlotfeldt, Mary Jansons, Joe Fleming and Lisa Stelter.

An End to the Shell Game

Perhaps the biggest change brought to Print and Mail Services by the Océ VarioPrint i300 was an end to the practice of printing shells on an offset press and then overprinting digital information on them.

“We send out approximately 4,000-5,000 communication letters daily,” explains Stelter. “We found ourselves having to print up thousands of monthly letterheads on our offset presses. We had to run that back through a black-and-white toner machine to print the black onto the letterhead. The ability to get that done in one fell swoop [on the i300], versus the expense of having all those offset presses and the staff to run the shells, it’s just been tremendous.”

Forms, too, are handled much more efficiently on the inkjet press.

“We had tons and tons of forms that we would print on the offset press,” Stelter says.

To finish the high volume of booklets Print and Mail Services produces, the shop added the BLM600 in-line booklet­making system onto the Océ VarioPrint i300. It combines stitching, folding, spine forming and trimming in a single machine to produce square-back booklets up to 224 pages thick in a variety of sizes.

“We no longer have to take that work offline and put it together,” Stelter says. “We’re able to put white paper in and [get] a finished product out. I love that.”

Getting the Océ VarioPrint i300 and consolidating the two facilities allowed Print and Mail Services to reduce its equipment stockpile. The in-plant went from two Xerox iGen4 digital presses, a Canon imageRUNNER ADVANCE C9075 and a Xerox Phaser 7400 to one Xerox iGen4, and from three monochrome printers to one. It also eliminated a collator, a folder, a cutter, a business card cutter, a platemaker, a laminator and much more. The in-plant held onto two of its four Ryobi presses to print envelopes, and traded its Pitney Bowes Mailstream Evolution inserter for the smaller, more versatile Pitney Bowes Pulse inserter.

“We consolidated our large-format operations,” Stelter adds, going from two 60˝ printers to just one.

The consolidation brought big savings in overhead costs. The in-plant reduced its employee count by almost half, transitioning some staff to other responsibilities, and its departure from the Fargo facility not only cut expenses but benefited the company in other ways.

“We occupied approximately 10,000 sq. ft. in Fargo,” Stelter says. “We have the ability now to repurpose that space for patient care.”

Another efficiency that the consolidation allowed was the transition to a single job ordering method. The in-plant now uses the WRIKE project management tool. Job files reside on the corporate server and clients order them by referencing the job number.

The in-plant also installed Canon PRISMAprepare document preparation software, which enabled it to streamline 20 different workflows from one central hub.

Since adding the VarioPrint i300, Stelter no longer worries about color and brand consistency on printed pieces.

“The consistency of the color coming off the inkjet machine,” she says, hasn’t changed since the day the shop started running it.

Stelter is pleased with the substantial cost savings inkjet has brought to Sanford Health.

“We’ve been able to transition a lot of work from our toner devices to the inkjet,” she explains. “The toner click charge is far higher than an inkjet click charge.”

Overall, she adds, 60% of the in-plant’s work, both offset and digital, has moved to inkjet.

As the in-plant gains experience with the VarioPrint i300, Stelter intends to seek out new work from internal departments at Sanford Health. One source is the transactional work that is currently being sent to an outside print provider.

“My goal would be to bring that transactional print back into our environment,” she says.

Sanford Health’s continued growth also opens up some opportunities for additional volumes and the possibility of adding a shift.

“Having the print center set up for success so we can run a second shift … was part of the whole consolidation plan,” Stelter reveals. She is confident the i300 will be ready for the in-plant’s peak volume period between October and February.

Stelter sees another key benefit the Océ VarioPrint i300 provides for the in-plant — one that enhances its overall value to the company.

“What it’s allowed us to do is produce work as fast as we can to get communication into the hands of people that provide health care and to our patients,” she says. This supports Sanford Health’s core purpose, thus making Print and Mail Services an integral part of the company’s mission.

Three New Challenges of the New Normal
END_OF_DOCUMENT_TOKEN_TO_BE_REPLACED
Upcoming Webinars
Print Outlook: What to Expect in the Year Ahead