Inkjet Summit Lesson: Risk of Not Investing in Inkjet is Too Great 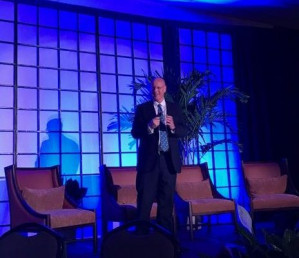 Marco Boer addresses the Inkjet Summit attendees during a wrap up session based on his key takeaways from the event.

During the closing remarks of the 2019 Inkjet Summit, Marco Boer (I.T. Strategies) had a distinct message: if you want to grow in print, the [inkjet] choice is clear.

"I'm very confident that this is the place to be," he said of inkjet. "It's not that big a risk."

On the other hand, the risk of not investing in inkjet is getting higher.

Boer expounded on that message with a series of five key takeaways from the three-day event that took over the Ponte Vedra Inn and Club in Ponte Vedra Beach, Fla., April 8-10.

The decision to invest in inkjet is worth the time it takes though, Boer stressed, "if you want to be on the growth curve of things, inkjet is it."

Boer closed out his key takeaways with his favorite quotes from the event, including "don't make the new look like the old." Yes, quality and consistency is key when it comes to print, but Boer explained that if you're pitching new inkjet technology to your customer as a high-quality, cost-efficient solution, they might wonder where their savings are with the technology.

"You have to do something new," he advised.

Marco Boer is wrapping up the @inkjetsummit and summing up what we learned. pic.twitter.com/seaIh8YrA8

To wrap up the wrap-up, Boer confessed he had developed his own "favorite quote" based on what he had gathered on inkjet both from the event and his own experience.

"Inkjet technology is a complex, multi-disciplinary science," he said. "It is an on-going process of further extending the marriage of chemistry, physics, mechanical and electrical engineering to address an ever greater range of applications that can be printed digitally."