Inkjet: Why it Works for In-plants

Ten years ago — even just five years ago — inkjet was an intriguing print technology that could open up new applications, but wasn’t necessarily an ideal replacement for toner or offset equipment; quality and speed still did not meet every in-plant’s expectations. As the manufacturers have refined and improved the technology, however, those gaps have gotten significantly narrower, and today’s inkjet is not the same equipment in-plants may have considered in the past.

As a result, inkjet is gaining popularity in the in-plant market — particularly in three main industry segments: government, K-12, and health care/insurance. We talked with in-plants in each industry to learn why inkjet works for them.

For Craig Seybert, manager of Printing Services at Penn State Health, in Hershey, Pa., quality and consistency are what drove the switch to inkjet technology. The in-plant operation, which has eight employees, had previously used a mix of toner and offset equipment to produce a range of materials from stationery and business cards to marketing materials. Today, he notes, 95% of the work that was previously printed on the toner devices has migrated to his shop’s Canon varioPRINT iX-series sheetfed inkjet press, along with 80-90% of the offset work.

“As the health system continues to grow by leaps and bounds,” says Seybert, “we were having issues with quantities, and having enough to support the whole system. Turnaround times [were an issue], as were the reliability and consistency of toner. Those were the primary drivers to look into [inkjet] technology.” 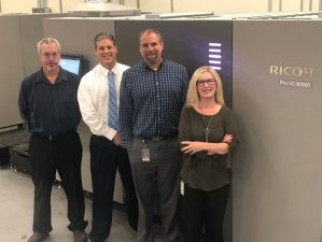 Speed was also an issue for the Michigan Department of Technology. Kristen Hampton, director of Print and Mail Management, notes that the need to increase production speeds for transactional documents, as well as get away from per-click charges, were driving factors in her Lansing, Mich., in-plant’s move to inkjet.

“We do a great deal of transactional printing,” she notes. “We have the Health and Human Services daily correspondence that prints every day, for example, and that is printed and mailed the same day. We are doing on average 3-3.5 million impressions per month for just that daily correspondence project.”

“We do a large amount of math [curriculum] for elementary grades,” says Lee Christiansen, print shop manager for the eight-employee in-plant. The shop’s Xerox Baltoro cut-sheet and Xerox Rialto 900 roll-to-cut-sheet production inkjet presses have greatly simplified the production of these materials. Operating in-line on the Baltoro are a C.P. Bourg Sheet Feeder, a Tecnau perforator and a Plockmatic Power­Square 224 booklet maker, allowing the shop to produce finished booklets.

“We [went] from what was basically a four-process operation where we would print, then perfect bind, then cut, then box, to that is all done now by one individual, who can print, trim, saddle stitch, and box, and it comes off bound and ready go,” Christiansen explains.

In fact, he estimates that it takes as little as a third of the time it originally took to produce the packets using inkjet, cutting as much as three to four months out of the turnaround times. 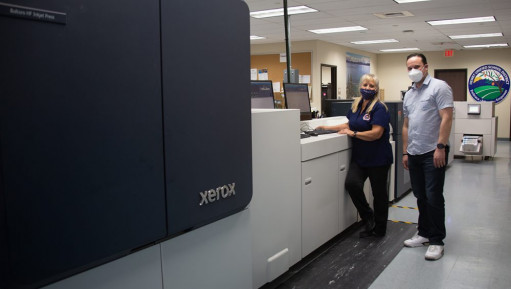 For many in-plants that considered inkjet in years past, quality concerns were a major reason not to switch. Even on equipment that could meet quality expectations, the ability to get those results consistently was lacking. But modern inkjet equipment has overcome those early challenges, and today’s output is nearly indistinguishable from other options in most applications.

“The quality is, in my opinion, better than the old toner,” says Seybert, who has been in the print industry for more than 30 years. “I would compare the quality coming off inkjet to any of the offset done in my life. The big thing is consistency — they tell you when selling [the equipment] that the first sheet will look like the last sheet, and believe it or not, it does. With toner, we would have fluctuation in color — not that it was unpresentable, but someone in the industry would notice the difference. Not with inkjet. We have had no complaints, and even had a few clients ask if we changed something because it looks cleaner and crisper.”

Christiansen doesn’t know if he would go quite that far, noting that the quality of inkjet “is not at the level of toner-based” equipment, but that the cost comparison between the two isn’t even close. “[Toner] is much more expensive,” he notes.

That said, for Christiansen, quality was not a deal-breaker, as his shop is producing what he calls “disposable” products that are meant to be used by students, pulled out, and handed in to the teachers to grade.

“We don’t expect it to match our toner-based products,” he notes, “whereas something that goes out as a public-facing piece we might want a cleaner product. But I have also seen some inkjet come in from other areas that looks very nice — I won’t say it matches toner, but I would say in the next five years it probably will.”

Hampton — whose in-plant is currently 63 people strong — notes that inkjet quality is good for her shop’s applications, although the operation has other equipment available if a truly high-quality piece is needed, or if a glossy stock is required. For her, the ability to add color to documents has been a bigger deal, allowing her shop to offer highlight, and even full color, options to the departments she serves — without additional charges. That ability to print full color at speed was especially useful during the pandemic, she notes.

“We were able to do a lot of the color work that, because of speed, we couldn’t do before, especially in this last year,” she says. “Typically, we would have had to find a local vendor to get the work done, but we have been able to do it ourselves.”

That work includes COVID vaccine flyers and information, she says. Often the in-plant had only hours to get it printed and shipped, something that would have been impossible if the shop had to outsource, and expensive if it didn’t have inkjet. 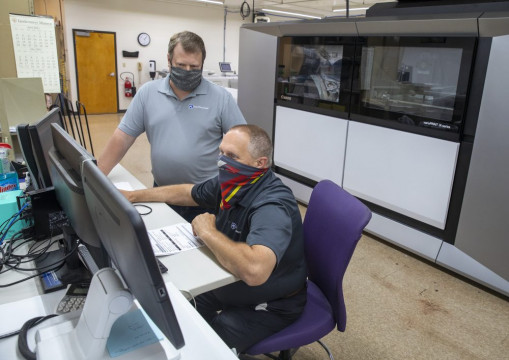 For those in-plants on the fence about investing in inkjet, all three managers suggest taking another look — especially if it’s been a few years since your first look.

Hampton notes that for government in-plants, inkjet is particularly compelling. “I think variable data and the ability to do that with full color and at the speeds [inkjet can reach] just can’t be beat,” she notes. “That’s a direction a lot of government is going toward; color does catch your eye. And when it can be offered at such reasonable prices compared to toner, that’s a real win for state government.”

Christiansen notes that when it comes to school districts, the cost of inkjet is something that cannot be overlooked. “The single driving factor for us is low cost,” he affirms. “Being responsible for public funds, it is important to reduce costs where we can. And the best way we can do that — and have the highest level of education — is inkjet.”

For the health care industry, Seybert agrees that cost is a big reason to consider switching, or at least adding, inkjet to an in-plant operation. “[Inkjet] allows you to maintain your cost factors, as far as operating costs,” he says. But he also notes that reliability and reduced down time are major factors to consider inkjet as well.

“With our former devices, we would have service techs in two to three times a week,” he reveals. “But with inkjet, it is very infrequent that we need a service technician. Cost and reliability — those are the two biggest factors for why in-plants are a great fit for inkjet.” 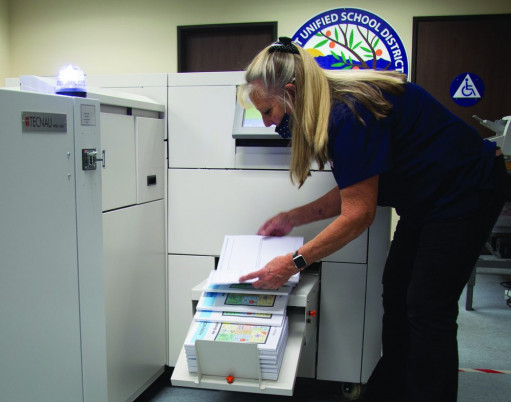 With that in mind, all three offered up advice to other in-plant managers on what to keep in mind when considering inkjet equipment.

“Inkjet requires a controlled environment and consistent usage; you don’t want it to sit for periods of time,” notes Christiansen. “Really understand the amount of product you’re going to produce, and make sure [the equipment] stays active. Know your workload, and what you have the opportunity to do.”

For Hampton, it’s about taking the time to understand the inkjet landscape before jumping in. At the same time, though, she emphasizes, don’t put it off for too long.

“Do you research, and find the equipment that is best for your operation,” she says. “We have found that we regret we waited so long to do it; we were a little hesitant as well. It was a big investment. But making that return on investment doesn’t take long at all, and it is just a game changer.”

Finally, says Seybert, forget everything you thought you knew about inkjet, even if it’s only been a few years since you last considered the technology.

“The technology is here today, and it will only get better,” Seybert concludes. “And if you don’t think about embracing the technology today, you probably won’t be around tomorrow.”

Pantone Introduces Its 2023 Color of the Year
END_OF_DOCUMENT_TOKEN_TO_BE_REPLACED