Not many of us work in a building with five sides — much less one with more than six million sq. ft. of floor area. Kenneth Stopinski does. He works in the world’s most famous five-sided building — the Pentagon, in Arlington, Virginia, where he runs the Printing & Publications Management operation for the U.S. Navy.

The in-plant’s focus, he says, is “quick turnaround of high-profile information products supporting the Secretary of the Navy’s mission.” It’s a busy shop that boasts a diverse equipment portfolio, a commitment to excellence, and a unique place within the broader in-plant printing community. 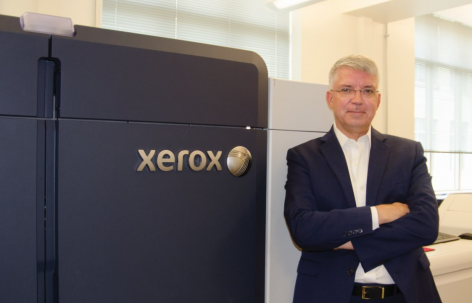 The roughly 2,000-sq.-ft. operation has a staff of seven that produces manuals, reports, flyers, posters, business cards, and publications, in addition to handling mail operations for both the Secretary of the Navy’s office and the Naval Support Facility, also located in Arlington.

Beyond its core product mix, Stopinski says the in-plant occasionally prints on canvas, creating fine-art reproductions for Navy offices by using images drawn from the extensive collection of the Naval History and Heritage Command. For this same purpose, the shop also does a limited amount of framing work. He says he is often amazed at how an image printed to canvas can easily mimic a painted work of art.

Despite working for the Navy, Stopinski is a civilian, and the path to his current position included a stint with Unicor, the federal prison industries program, where he was operations manager of the printing program.

“I’ve been in printing my whole life,” he says. His current title is branch head, Facilities & Support Services Division, Printing & Publications Management, Department of the Navy, where he has served for the past three years. Amiable and chatty, Stopinski speaks proudly of the operation and the people he manages, and of the mission it serves.

The team at the Navy’s Pentagon in-plant, which, to Stopinski’s knowledge, is the only Navy in-plant, consists of himself, a printing officer, printing specialist, graphic designer, and printing manager. The team is rounded out by three enlisted individuals who handle incoming and outgoing mail. Stopinski and his printing officer both have technical printing backgrounds, and the graphic designer has a degree in her field. When he was seeking to hire a graphic designer, he was specific about requesting someone to design for print media. He notes that many of today’s young designers have a primary focus on designing for online media. 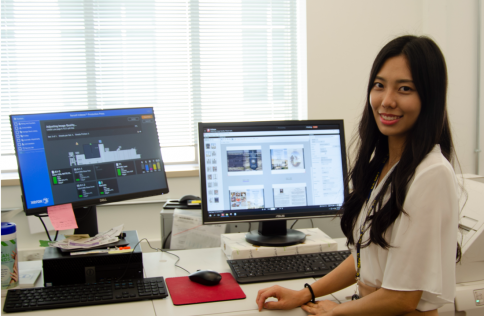 The in-plant’s key digital production press is a Xerox Iridesse with a fifth print station, which enables it to use speciality dry inks like gold, silver, white, and clear. His is the only in-plant in the Pentagon with fifth-color capability, Stopinski says. The shop also runs Xerox Work­Centre 7855i and AltaLink C8030 printers, plus two wide-format inkjet printers: an HP DesignJet T1300 and an Epson Stylus Pro 9800. The shop has a variety of finishing equipment including binding, cutting, foiling, and lamination. It recently added a business card cutter. All of the in-plant’s equipment purchases are managed by the U.S. Government Printing Office.

Stopinski says that while his shop handles no classified materials, it does print material that needs to be kept “close to the vest” until the right time. One example is a book featuring the Navy’s proposed annual budget, the content of which is kept confidential until it is released officially within the budget cycle.

Because the Pentagon is a secure facility, receiving supplies and materials for the in-plant comes with an additional level of complication. Deliveries must first be routed through a remote delivery facility where they are scanned and inspected. The drivers and their trucks are checked out too. 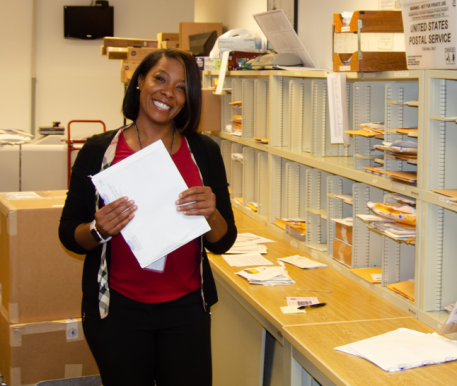 Janita Armstrong oversees mail operations for the Navy’s in-plant and another nearby Navy facility.

While careful planning generally ensures on-time deliveries for the shop, it is not always the case: “If we need something right away,” Stopinski says, “we’ll go pick it up ourselves.”

For additional security, the shop’s presses are operated offline using only portable hard drives, with no internet connection. 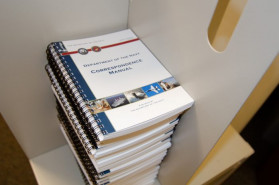 Publications printed by the in-plant.

While the number of impressions per month produced by the in-plant tends to vary, Stopinski estimates it is around 400,000. Jobs arrive via email, online portal, and even from people walking into the shop. The in-plant does not charge back for work but operates on a budget based on prior year consumables.

The in-plant, Stopinski says, generally does not need internal promotion, given that its reason for being is to serve a specific, designated need. That said, he reports that the shop’s printing officer, Arthur Hampton, is an excellent spokesperson and works to maintain a strong relationship between the in-plant and the secretary’s office.

While the operation can handle most of the work that comes its way, occasionally work must be sent to sister in-plants inside the Pentagon (the Air Force and Army both also maintain in-plants there), or to Defense Logistics Agency Document Services if his shop lacks the specific capabilities needed to produce the job as specified.

By having a specifically designated in-plant, Stopinski says, the Navy ensures its work gets priority treatment. He and his staff share a commitment to excellence in printing and to meeting the diverse printing needs of the Navy’s commander.

“We do everything under the sun here,” he says.

Pantone Introduces Its 2023 Color of the Year
END_OF_DOCUMENT_TOKEN_TO_BE_REPLACED