Ken Johnson: Still Having a Ball 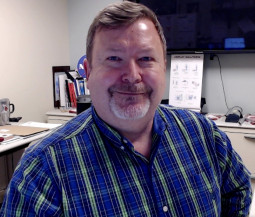 Few who know Ken Johnson would guess that this dyed-in-the-wool Hoosier actually spent his formative years in Scotland and England and even spoke with a British accent as a child, an ability he has sadly lost.

“I can’t fake an English accent to save my life,” says the director of Printing Services at Ball State University, in Muncie, Indiana.

The son of a military man, Johnson was born in Peru, Indiana, but didn’t stay there long.

“We moved around about every two to three years,” he says — from the U.K. to Michigan’s Upper Peninsula, to Labrador, Canada, to Maryland. When his father retired from the U.S. Air Force in 1976, the family settled in Portland, Indiana. It was there, at Jay County High School, that he first encountered the graphic arts, and a lifelong love of printing was born.

“In your freshman year you had to take an introductory class in industrial arts, and you would go around to all the different areas,” he recalls. “I found that, during that rotation, I kind of liked printing.”

He liked it so much he took a summer printing class, during which he used an A.B.Dick 360 to print school materials for the coming year.

When Johnson graduated in 1980, he admits, college was not on his mind. Fortunately for him, it was on his father’s mind; in retirement his dad decided to get a teaching degree and began attending Ball State University. The younger Johnson tagged along to some of his classes and met the instructors in the school’s graphic arts program.

“When I realized I wasn’t going to be able to make a good living going to a factory, I [decided] college was O.K.,” he says.

Looking for a student internship at the end of his two-year associate degree program in graphic arts technology, he lucked into an opening at Ball State’s in-plant by stopping in the day two other students had quit. Despite his experience shooting negatives and operating a camera, however, the supervisor put his skills to the test first.

“He took me into the darkroom, we got the chemistry mixed up, and he handed me the work and said, ‘Here, prove it,’” Johnson recalls.

Prove it he did, and he worked at the in-plant for two years while finishing his Bachelor of Science in Graphic Arts Management. Upon graduation, Johnson took a temporary full-time position at the shop, and when it ended, the director, Bud Zink, helped him get a job at the commercial printing company he had founded, Printers Zink. Johnson started there as a feeder operator on a two-color Miller press and learned a lot in his eight months there.

“I was working with a really fantastic guy who knew his stuff,” he says.
He picked up bindery skills and learned some work basics (like the importance of reading the job ticket before asking dumb questions, he laughs).

When a prepress coordinator position opened at Ball State in 1985, Johnson eagerly returned.
“My big goal at the beginning was to learn how to be a four-color stripper, which I did — just in time for that part to go away,” he laments.

Johnson worked for many years at the in-plant and learned a lot from Zink. So, he was jolted when the director took sick leave to receive cancer treatments and recommended Johnson step in as interim director.

“That was a pretty big jump for a 29-year-old,” Johnson says. Trying to look on the positive side, Zink told him, “If something good’s going to come out of this, at least you get a chance to prove that you can do the job.”

Sadly, Zink did not recover. In 1993 Johnson took over as director of the then $1 million operation.

At the time, the shop had only one-color presses, and employed 12 full-timers and seven students. Weary of all the manual calculations involved in job estimating, Johnson endeavored to add an automated estimating system. He was aided in this by contacts he made while attending the Association of College and University Printers (ACUP) conference, who put him in touch with the right suppliers. Over the years, Johnson became a fixture at ACUP and In-plant Printing and Mailing Association (IPMA) conferences, learning a lot from his fellow managers.

“As a director, it’s really helped me grow and build a resource when I’ve got an issue,” he says of these events.

When his in-plant was challenged by a facilities management firm, he sought help from his conference friend Ray Chambers, who coached him on which questions to ask and how to verify the FM’s data. Johnson was able to sit in on the meeting when the FM representatives made their pitch, and he blew holes in their proposal.

“That was the end of that conversation,” he says.

Over the years, Johnson improved his in-plant’s technology, upgrading its toner and wide-format printers and eventually adding a four-color press so the shop could print Ball State’s marketing materials.

“We started bringing in more and more of the work that the marketing people were sending off campus,” he says. “We had to prove that we could do the quality.”

Part of that proof came from the In-Print awards the in-plant won over the years for its work.

In 2012, the in-plant received the right of first refusal for all university printing so it could ensure the integrity of the school’s branding.

“We never used it as a big stick to beat them over the head with,” he says. “We would gently encourage them to come to us, and we would show them that we could do the work. We won the bulk of the work because of the quality of the service.”

In March 2019, Johnson spearheaded a bold move when he replaced the in-plant’s two offset presses with a six-color, 20x29˝ Heidelberg Speedmaster 74 with a coater to capture even more of Ball State’s printing.

“The first fall that we put in the new press, we brought back in $60,000 worth of work that was previously being done off campus,” he declares. It was a great success story — for a few months.

“When COVID hit, the work on that press almost dropped to absolutely nothing,” he laments. It was frustrating, he says, to have built the shop’s capabilities up to that level and then have it all come to a screeching halt. Since then, offset work has been slowly coming back, he says.

“Last year we won [the bid for] half of the Admissions work that was going off campus,” he reports. “We worked very hard to get all that [work] back … but now the volumes are starting to drop.”

The whole situation brings him a lot of stress.

“If the volume of work doesn’t come back, are we going to be able to still support all of the equipment we have?” he wonders. “Are we going to have to go out of the offset business? The biggest thing that keeps me awake at night is worrying about keeping my employees employed.”

To keep the work coming into his seven-employee shop, Johnson has worked up a marketing plan for the in-plant that includes customer visits, training sessions, emails, and more.

By meeting with customers, he and his staff have learned about wide-format applications customers are interested in ordering. Even if the shop has never done the type of work they need, he accepts the job and then figures out how to get it done.

“I’ve never been afraid to trying something new,” he says.

Johnson is proud of his staff for the quality of the work they produce and their willingness to take on new types of work.

“We have very few things that we can’t do for customers,” he says.

Outside of work, Johnson enjoys taking long rides on his 2005 Honda Shadow Aero motorcycle through the Indiana countryside as well as playing a good game of golf. He and his wife Lisa have three children ranging in ages from 18 to 35 and a 12-year-old grandson. The couple is currently spearheading the production of their daughter’s high school yearbook.

Thinking back on his long career in printing, Johnson has no regrets.

“It’s something I got into in high school, and it’s always kept me entertained,” he concludes. “There’s enough new things going on in printing, I don’t get bored.”