To reward in-plants that have displayed innovation and creativity to improve their business models, IPMA created the Innovation Award. This year, Messiah College Press was selected as the recipient of that award.

As part of a college-wide initiative to cut costs and meet ongoing budget challenges, the Mechanicsburg, Pa., in-plant was asked to put forward suggestions for cutting $100,000 in spending from printing and mailing services.

“The college could have made cuts to our program,” says Director Dwayne Magee. “Instead, a team was assembled to think creatively about finding savings.”

At the time, the college was spending tens of thousands annually on inkjet and laser print cartridges. Extensive print runs were being done on desktop printers not designed for the high volumes, at a high cost.

To align themselves more closely with Messiah College’s ethos of sustainability, the team took inventory of campus equipment and found 54 satellite copiers and 170 desktop printers, running at a total cost of more than $125,000 a year. Several problems were pinpointed, including:

Magee was part of a task force that examined the data and proposed consolidating the existing range of printers and copiers into one managed print program. The expensive desktop fleet would be reduced by 75 percent, while the outdated copiers would be upgraded to more efficient models with enhanced capabilities.

Magee created a request for proposal that laid out clearly how the proposed new program would improve print services and ultimately save money. Three key areas were identified:

With the proposals agreed upon, the College Press team set about putting the plan into action. In addition to ascertaining the location of printers and copiers throughout the campus, an audit program was used to assess the current output from each location.

A detailed floor plan was drawn up of each building to demonstrate where the proposed new devices would be located. Test models of each proposed device were placed at strategic locations around campus so they could be tested. This gave staff the chance to troubleshoot any potential problems and observe how the new printing equipment would work. 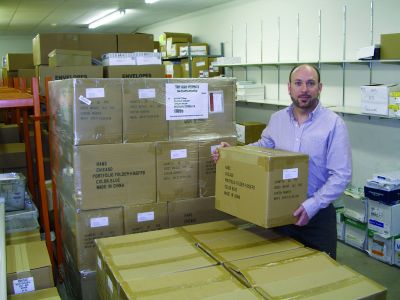 After initial testing was completed, a fleet of new printers and copiers was installed. Training was offered to all staff members, which helped staff to familiarize themselves with the equipment and reap the benefits of the new printing program.

College Press’ staff was trained in the new software so they could take over IT’s support for printing. The team has embraced the new printing program with a strong focus on providing excellent customer service and treating faculty and staff as valued customers. Staff members took on new responsibilities and integrated collaboration with other departments and outside vendors. The result is a customer-focused, organized, and knowledgeable printing staff.

In the six months since the project was implemented, production copier use has grown from 34 percent to 47 percent, while the use of desktop printers has shrunk from 38 percent to 11 percent. This shows that large-volume print jobs are being distributed to the correct machines.

“Our overall campus print volumes have dropped,” affirms Magee, “and we can project that our cost savings objectives will be realized by the end of the fiscal year.”

Messiah Sees the Light on FSC

From Obsolete to Outstanding