When one of your services increases at a rate of up to 500% over the course of three to four years, it only makes sense to invest in a device that will reduce turnaround time, increase productivity, and eliminate workarounds. That was the case for the Boys Town Print Shop, located just outside of Omaha, Neb.

The in-plant for the nonprofit organization, which is dedicated to caring for children and families, had been seeing a steady increase in yard sign work beginning a few years ago. It started with about a dozen signs, which quickly increased to three dozen, then to 100, and finally to a staggering 514 in the first nine months of last year. When the work skyrocketed, partially due to the pandemic but mostly due to an extensive chain of word-of-mouth promotion, that surge justified the need for a new device, says Manager Doug Larsen.

The solution came in the form of a Xanté X-16 flatbed UV printer, which was purchased from the in-plant's local supplier, Print Technologies, Inc., and installed in March of 2021.

“If yard signage alone could justify the machine, then everything else we could do would be frosting,” he says.

In the first six weeks since installation, the in-plant had already produced 300 yard signs and hundreds of polyethylene mailer bags, something the shop didn’t even expect to be able to do, according to Larsen.

An order came in to produce branded boxes — another new capability — to mail out T-shirts for a Memorial Day run. As the boxes were being produced, the customer asked if the shop could print on the mailer bags that the shirts would go into. Larsen says the print shop gave it a shot and the customer loved it so much they ordered nearly 600. 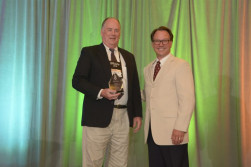 Doug Larsen accepts the In-House Promotional Excellence award on behalf of his in-plant from IPMA awards chair Christopher Donlon in 2019.

Add PVC wallet cards (used for Boys Town alumnus cards), magnets, and coasters to the boxes and bags, and the new capabilities make up the “frosting” Larsen was looking for on the new device.

“I read [In-plant Impressions] and I see all these other organizations urging people to get into specialty items, and now I see why,” he says.

Much of the work being done on the Xanté flatbed isn’t necessarily “new” work, but it’s certainly become much more efficient and streamlined.

Yard signs, for example, were previously printed on stickers and affixed to coroplast signs, which took significantly longer to produce.

“It was OK when we did a dozen, but when you do that 500 times, it takes a lot of time to do, and the time alone and labor is hard to justify,” Larsen says. “But we didn’t want to turn away that [business].”

Utilizing UV technology and the included vacuum bed, eliminating extra steps, and adding speed with the new press have drastically improved productivity and turnaround time, as well, he says.

From Days to Minutes

“Before, it would take us three days for the ink to dry and a half day to mount yard signs,” Larsen explains, “so the fastest we could do a yard sign was three-and-a-half days — and now it’s about six minutes. It’s a whole paradigm shift. Instead of hours it’s minutes, and instead of days it’s minutes.”

Overall, the device has been easy for the print shop to navigate, however the ability to print on thicker stock — it prints 18x24˝ with a height of up to 7˝ — has been the most challenging.

“It’s been a mind-bender on how to place the third dimension,” Larsen says. “I’m used to the X and Y axis, but now there is also height added to the calculations when we’re adding something up.”

Even though there has been a slight learning curve to account for the new height dimension, Larsen explains that adding a flatbed UV device shouldn’t be a question of “should I or shouldn’t I?”

“What I see in printing is a constant battle among in-plants to prove our worth as viable to our organization,” he concludes, “and that means sometimes doing things that are outside the normal color and black-and-white copies.”