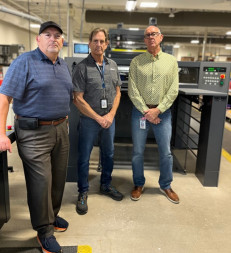 When the Texas Department of Transportation (TxDOT) drew up plans for a modern $300 million headquarters complex in southeast Austin where it would consolidate employees from five campuses, the move could have spelled trouble for TxDOT’s Print Shop. After all, corporate relocations can bring extra scrutiny to an in-plant as leadership evaluates the cost of building it a new facility.

“We have a very good reputation,” says the administrative manager of TxDOT’s 18-employee Print Shop.

His confidence was well placed. Instead of considering outsourcing, TxDOT included a brand new state-of-the-art printing facility in its plans. In August, the in-plant finally moved into its new home, an 18,000-sq.-ft. facility about 12 miles from its previous shop.

“They spared no expense,” praises Maynard. “It’s a gorgeous facility.”

The climate-controlled plant has three loading docks, a conference room wired for digital connections, and lots of windows to let in the sun.

That wasn’t the only major change at the in-plant. In August, TxDOT’s Print Shop installed a new four-color, 25.2x37" RMGT 940ST offset press with an LED-UV curing unit, replacing its four-color Ryobi 754G XL. With a larger sheet size enabling the shop to expand the types of work it can produce, and an LED-UV curing unit that instantly dries printed sheets, the new 15,000-sph press will dramatically step up productivity, Maynard predicts. 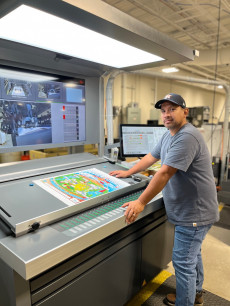 Operator Michael Moreno checks a sheet at the press console.

“We should be more competitive, and we should have more throughput overall,” he says. “And we should be able to push more revenue through here with the same crew.”

The new print shop resides inside TxDOT’s new 131,000-sq.-ft. warehouse, one of five buildings on the 49-acre TxDOT campus. The move not only brings the in-plant closer to its TxDOT customers, it also unites the Print Shop with the department’s Digital Print Center, a separately run 10-employee operation that works closely with the Print Shop. The two in-plants were previously miles apart.

“Now we’re both side by side,” says Maynard. “We can deal with them in real time, real fast, not just over the phone.” This will improve communication on the many jobs that utilize both offset and digital printing.

Instead of individual offices like in its old plant, the new space uses an open office plan, with a wall between this area and the shop floor to mute the noise. All managers, administrative staff, and customer service reps are together in one area, enabling easy communication.

The new TxDOT campus is an oasis of amenities on the southern edge of Austin, just seven miles from the state capitol. It boasts a fitness center, a dedicated nurse clinic, a cafeteria, secure parking, and nearly three miles of walking trails.

“They set us up first class here,” Maynard says.

The timing of the new press to coincide with the Print Shop’s move was somewhat coincidental. 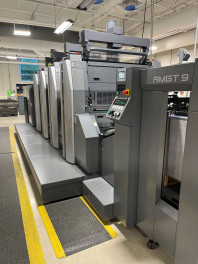 “Our seven-year lease ran out,” he explains. TxDOT requires the in-plant to lease its equipment, so while the Ryobi was still relatively young by offset press standards, it was replaced. Maynard has no regrets, though; the new RMGT 940ST has numerous outstanding features. Chief among them is the LED-UV curing unit, which instantly dries printed sheets.

“It doesn’t matter how much coverage we have, we can print it, it’s dry, the bindery can grab it real quick,” remarks Art Garcia, production manager.

There are no worries about ink offset on the sheets, so the operator can let printed sheets pile higher without having to stop periodically to remove them.

“We should yield significantly more sheets per hour, which reduces the cost,” says Maynard.
Instant drying also means the press does not need to use powder, which reduces clean-up time.

“We don’t have to do as much maintenance,” affirms Garcia.

Makeready waste is also lower on the new press — just 200-300 sheets at startup. Ink profiles are sent from prepress to the press, which sets ink keys automatically and adjusts for the proper sheet size and thickness. The shop uses its Fujifilm Javelin 8300S computer-to-plate system to burn plates for the press.

Another improvement is the press’s use of large ink canisters.

“That eliminates the need for somebody to be constantly filling the ink wells,” notes Garcia. “Overall, we just felt like [the RMGT 940ST] was a big leap in technology.”

The press has easily been able to keep up with some very large-run jobs so far.

“We have some significant runs,” says Garcia. “We just got done with a job that was 500,000 impressions.”

The press’s automation features have reduced the need for operator intervention — so much so that Maynard expects to need only a single pressman.

“Our intentions are, we’re going to one press operator and that’s it,” he says.

Maynard recognizes that being included in TxDOT’s consolidation plans was a sign of the strong faith the department has in its in-plant.

“It’s a commitment for them,” he says.

He intends to keep the organization happy by getting jobs printed faster and at a lower cost.

“We take care of our TxDOT customers,” he says.

None of that would be possible without a great staff, Maynard adds, and he praises the dedication of his employees to both TxDOT and to each other.

“If you can get people that really feel committed to each other then you really can’t do better than that,” he says.