“Immediately we started getting comments about the brilliance and the vibrancy of the colors of the posters,” remarks Director Chris E. Davis. 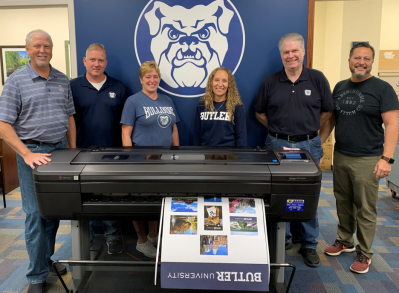 But as big of an improvement as that was for the seven-employee Indianapolis-based in-plant, it wasn’t the main reason Davis chose that device.

“We can … trim-to-bleed large-format posters [on four sides],” he exclaims.

The DesignJet Z9+ has top, bottom, and side trimmers that adjust automatically for each image. This is an incredible time saver for the in-plant, especially on high-volume jobs, like a recent run of 92 posters (42x56˝) it printed to hang in residence halls, showing bios and photos of student workers.

“Before this device, we would have had to take those to the light table and hand cut each and every one of those four sides,” Davis remarks. “Very labor intensive.”

The new DesignJet Z9+ was sorely needed to replace the shop’s six-year-old HP DesignJet 5400, which had “outlived its life expectancy,” Davis says.

But although he had approval for the upgrade by early 2020, he says, “when the pandemic hit, all purchases were put on hold.”

So the DesignJet 5400 was driven to its limits printing the surge of COVID signage and floor graphics the in-plant was asked to do.

Davis is thankful the new DesignJet Z9+ is finally in place.

“We printed over 300 signs for homecoming,” Davis says.

The output looks much better than it used to, thanks to the nine ink cartridges in the DesignJet Z9+, which include chromatic red, blue, and yellow, “which really adds a lot of depth to the images,” he says.

Though the inks are more expensive, the drastic difference in quality convinced Davis the cost was worth it.

“The quality is just absolutely phenomenal,” he enthuses.

Ecstasy With Your Poster? Inkjet Chemical May Be Addictive