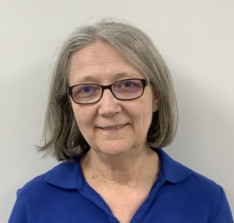 At the height of her career as a registered nurse in the 1990s, Deb Noss would never have imagined she’d spend her final days in the workforce managing a copy center. But as she looks back on her eight years of printing and binding classroom materials for the Mechanicsburg Area School District, she is every bit as proud of her contributions as she is of her 25 years in nursing.

“I felt good about doing things for these teachers because my three children went through this district,” says Noss. “I was glad to serve them because they had served my kids.”

Even more importantly, though, she recognizes that the educational materials she prints for the district’s eight schools and 400 teachers are helping prepare tomorrow’s leaders for their own futures.

“This is their education, and this is going to be part of who they are when they get older,” reflects Noss, who is retiring in July from the Mechanicsburg, Pennsylvania, district.

Born two hours east in Huntington, Pennsylvania, Noss spent most of her life in Mechanicsburg, near Harrisburg. She graduated from high school there in 1973 (without taking a single graphic arts class).

“By the end of high school, I was pretty determined to be a nurse,” she says.

Noss earned a registered nurse diploma from Geisinger Medical Center, and worked a few years in area hospitals before landing at Polyclinic Medical Center, in Harrisburg, where she served for 18 years in the neonatal intensive care unit.

In 2000, though, after the birth of her third child, Noss felt the need to play a stronger role in her children’s lives.

“I decided that it was time for me just to be home and be doing some things with my kids and their schools,” she says.

She did this for more than a decade, but once her youngest was in middle school in 2011, Noss decided to dust off her nursing degree and work as a substitute nurse in her child’s school.

“And they asked me if I would sub also in the copy center,” she says.

And so it began.

At the time, the copy center was run by two women who worked part time, and Noss would help them bind documents by hand.

“I actually was enjoying it,” she says, noting that the work was not as complex as nursing, where decisions can have more serious consequences.

When the district decided to create a full-time position in 2014 and offered Noss the job, she was surprised, and even a little intimidated, but confident she could do the job.

Noss quickly familiarized herself with the Ricoh printers and the small, mostly hand-operated bindery equipment. She became proficient at estimating how much paper and other supplies to order so she was ready for busy periods. As jobs arrived via the district’s helpdesk portal, she would work quickly to print and bind them in time for morning pickup at 7:30 a.m. by the district’s transportation department. She printed mostly classroom materials and tests, but also letters to parents, concert programs, sports schedules, flyers, and more.

In the process, Noss developed an appreciation for how important it was to teachers to receive legible copies of classroom materials on time. If someone needed something printed quickly, she would come in as early as 5:30 a.m. to get it done.

By making teachers’ jobs a little easier, Noss feels she is making a contribution to the educational process.

“I have felt that it’s been an important job in my life, as far as that I can make a difference,” she says.

Communication is the Key

In dealing with the stress of tough deadlines and demands, Noss has learned an important coping lesson: “Communication, to me, has been overwhelmingly my biggest lesson,” she says, calling communication “even more important than the printing itself.”

When teachers express frustration with her work or need something impossibly quickly, she never responds emotionally.

“I try to take a breath and say, ‘I appreciate your position. This is where I’m at.’ And I’ve learned to do that so much better,” she says. “You’ve got to communicate in a positive way.”

If she doesn’t understand directions, she asks for more information; if a request is not possible to fulfill, she asks if they can agree on a different solution. Because of her approach, Noss believes she has built up respect from teachers.

“They seem to respond to that so much better than if I say, ‘No, this can’t be done,’” she says.

Taking on the Impossible

But sometimes, despite apparent impossibility, Noss will take on an arduous request anyway. Recently, one of the schools needed 800 books bound in just two days, a task that generally requires a week of work, as the comb bindings must be done by hand. Because the shop’s Fellowes Orion-E comb binder can only punch 35 pages at a time, and the books had 102 pages, Noss had to split each stack of pages into thirds, punch them on the pedal-operated punch, then place them onto the comb — and she had to do this 800 times. Instead of insisting she needed a full week, she took on the challenge.

“I did stay [late], and I came in a little bit early and did finish that” in two days, she says. “And they were so appreciative of that.”

Reluctant to call herself a “printer,” Noss nonetheless feels her eight years overseeing copying at the district have given her a deep respect for those in the printing trade.

“I have gotten a much better … appreciation for print people and the work that they put in daily and how hard it is to keep up with numerous jobs,” she says.

As her retirement nears, Noss looks back proudly on her second career in the printing industry. “I do take pride in being able to serve these [teachers] in this district,” she says.

A recent decision at the school district, concurrent with her retirement, will change how copying is handled in the future. The district’s board voted to start sending its print jobs to another area in-plant, Messiah University Press.

“I feel badly that there won’t be a copy center on-site any more, but I’m ready to retire,” she says. “I feel good that it’s going into good hands.”

With her three children now out of college, Noss looks forward to spending time with her husband, Steven, and doing things she enjoys.

“I love reading and I love baking, and I’m looking forward to doing a lot more of that,” she says.