Offset quality is still seen as the gold standard among printers, and over the past three years, three different in-plants have achieved the industry’s top honor for the quality of their offset printing: they earned Best of Show awards in the In-Print 2020, 2021, and 2022 contests, co-sponsored by IPI and the In-plant Printing and Mailing Association (IPMA). Those awards were presented in June in a ceremony at the IPMA conference. Each winning project shows exemplary design, printing, and finishing, and each heightens the image of the parent institution for which it was printed. 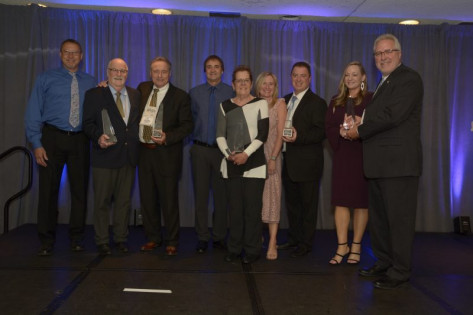 “We’re still highly offset,” says John Yerger, director of Print, Copy, Merchandising, Mail, and Distribution Services at the University of Nebraska - Lincoln (UNL). Roughly 75% of the work produced by UNL’s in-plant is offset, he says. So it’s no surprise the shop used its six-color, 40ʺ Manroland press to print the Chancellor’s Greeting Card last year — an elegant piece that went on to win Best of Show in In-Print 2022. 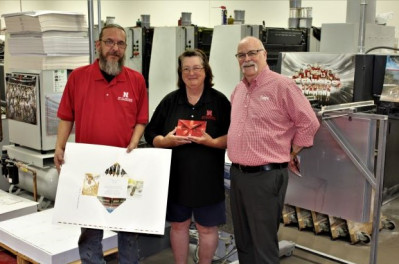 The card’s unique design gives it the appearance of a gift tied with a bow, but opens to expose visual and written messages designed to strengthen connections between UNL and key vendors and VIPs. Designed by the university’s Creative Director Marcelo Pilopis and realized in cooperation with the in-plant’s production team, the winning piece, when folded shut, completes an engaging visual effect.

“This piece would have been hard to do with digital,” Yerger emphasizes. “The way it was printed and scored required very tight registration.”

The in-plant printed 1,500 cards, which were cut at an angle to make a diamond-shaped sheet. When folded, all points of the diamond needed to cross over each other, and the print had to register perfectly. Because the angles used in the piece didn’t allow for mechanical folding, each piece was folded by hand by Bindery Specialist Nan Reinhardt.

The winning piece was printed on UNL’s Manroland press, operated by Senior Press Operator Jeff Fisher. Ensuring color consistency on the job — and all other jobs done at the in-plant — comes from a strong commitment to G7 color standards. In bindery, cutting and scoring were also mission-critical; all elements needed to align for success to be ensured. 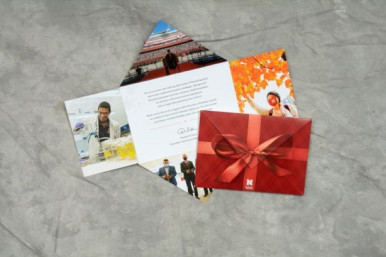 “For us,” Yerger says of the winning piece, “it was particularly unique. It’s not uncommon for us to have unique designs, and we appreciate the opportunity to get challenges like that.”

To bring the winning piece to fruition required the collaboration of designer, press operator, bindery, and others. “We use the same care with most of the jobs we do,” says Yerger, who adds that unusual jobs allow the in-plant to “manage by exception.” With this approach, a job that was an exception became a product that was exceptional. 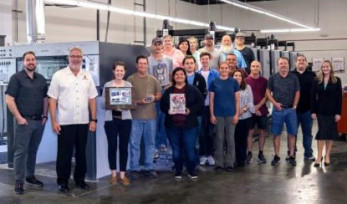 Standing with its 40ʺ Heidelberg Speedmaster, the University of Oklahoma’s Printing and Mailing Services team shows off the winning piece and the 2021 Best of Show award.

With a cover image that highlights the excitement of and passion for sports at the University of Oklahoma (OU), where football is a big focus, the annual football media guide, “has been printed for years and years,” says John Sarantakos, director of Printing and Mailing Services. The 2020 version of the annual guide — which includes biographies of coaches and players, university information, and football records and stats going back to the 1920s — had a run length of roughly 12,000. Designed by Scott Matthews, director of graphic design at OU Athletics, the roughly 300-page book includes, “wall-to-wall action shots and lots of crossovers,” he says.

The guide was produced using the in-plant’s 40ʺ Heidelberg Speedmaster perfecting press. Due to the length of the run, says Sarantakos, numerous press operators were involved in completing the job.

“A job this size runs for several days,” he explains. For a job of this length, he says, offset was the best process choice. The shop uses offset for roughly 40% of its work, he adds. To ensure quality of print and calibration of color, the press uses a closed-loop system that includes sheet scanning and auto-correction. One of the elements that made this job a specific challenge, Sarantakos recalls, was the heavy ink coverage on many pages, and a coating step.

“Perfecting gloss is always difficult,” he says. In the bindery, he adds, “where crossovers took place, the folding was paramount.”

Asked what made this job strong enough to be named Best in Show, Sarantakos says, “It’s the design aspect that really stands out.” For the university, he says, the annual guide is a high-visibility publication. 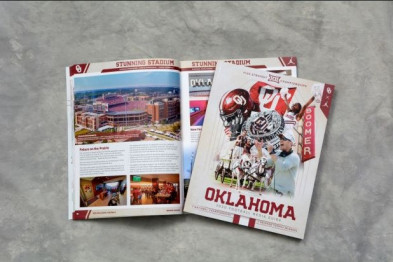 “With any major university,” he says, “the athletic department has a lot of effect on drawing students, engaging alumni, and attracting coverage, so it’s important.” He says the job of the university’s in-plant is to support the institution in the best way it possibly can.

“We’re viewed very well, and by our peers as a leader,” he says.

The University of Texas at Austin

Featuring an evocative image of “Bevo” the longhorn steer strongly identified with the University of Texas at Austin, the 2020 Best of Show winning piece was an annual report printed for University of Texas Athletics. Designed by an external design firm, the finished piece featured 52 pages plus the cover, with a print run of 10,000 pieces. 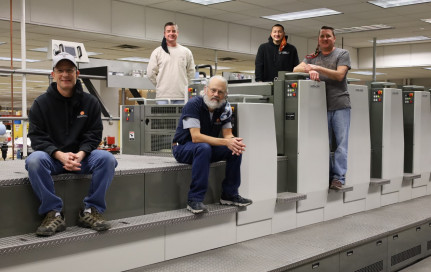 Asked why this piece was printed on an offset press when digital solutions were available, Richard Beto, director of Document Solutions at the University of Texas at Austin, says, “Offset is still producing the highest quality products. There are experienced print buyers who still understand the quality difference and demand the highest quality for their brands.”

The winning piece was printed on the in-plant’s five-color Komori Lithrone press, operated by Lead Press Operator Mark Canepa. It featured extensive bleeds, scoring, folds, saddle stitching, and tight crossovers with images and text. Additionally, the job included the application of an aqueous coating. Color consistency on the piece was maintained by scanning color bars throughout the print run. Beto says the commitment to quality on this job extends to other work done by the shop. 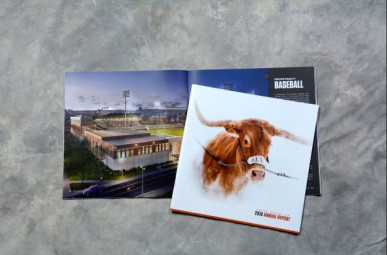 2020 Best of Show winner: University of Texas at Austin

“Brand is everything,” he says, “and having a printed project that reflects that pride is critical.”

In an age where digital solutions are making significant gains in the commercial and in-plant spaces, Beto maintains the primacy of offset for specific jobs.

“The future is inkjet,” he says, “but the type of work being produced drives when that switch is required.”

He says the shop’s Komori offset press has allowed it to outsource fewer jobs.

“Having offset now is more important than ever,” he adds, “as it gives the ability to change material, and mix them to produce a project that is vital to meeting customer demand.”