Though he could have been a chef if the coin had flipped the other way, Oscar Rivera has thrown himself into his 40-year graphic arts career with a passion.

It came down to a coin toss. Back in the early ’70s, as he was contemplating his future and trying to decide which technical high school to attend, Oscar Rivera found himself at a fork in the road.

From his home in New York’s Spanish Harlem neighborhood, the teenage Rivera was a subway ride away from both the New York School of Printing, which offered photography courses, and the Food and Maritime Trades high school, which focused on the culinary arts.

Both entrance exams were on the same day. His family and friends told him the choice was his alone. So Rivera did what any teenager would do when faced with a potentially life-changing decision: he flipped a coin.

“I said heads printing, tails food and maritime,” he laughs.

Thus began a graphic arts career that has lasted 40 years and taken Rivera to in-plants all over New York City, culminating with his current role as production manager at the United Federation of Teachers’ (UFT) Printing and Mail Department in lower Manhattan.

Inspecting a proof in the United Federation of Teachers’ Printing and Mail Department are (from left) Robert Mirabella, Deochand Seereram and Oscar Rivera.

“This was the path I was supposed to be on,” he declares. “This was in the cards for me.”

After that fateful coin toss, Rivera threw himself into his classes, quickly discovering that his love of photography extended to the entire printing process. In his junior and senior years he apprenticed at Mayfair Printing in the Bronx. After graduating in 1977, he took his first in-plant job at the Society of the Plastics Industry, where he ran Multi 1250 and 1850 presses and printed letterhead and newsletters.

Rivera had plans to go to college after working for a few years, but admits that once he started making money it was hard to consider stopping to go back to school. He ended up working there for two years before taking another in-plant job at F. Eberstadt, a financial company in lower Manhattan.

On to Another In-plant 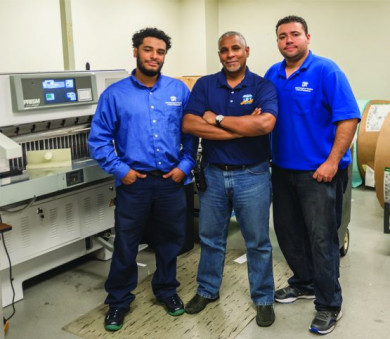 From there Rivera moved to accounting firm K.P.M.G. for several years, running its Multi 1250s, before landing a job at Seltel International, a media company, which was purchased by Katz Communications in 1992. He spent a decade in the print and mail operation here, eventually moving into a supervisory role.

“The manager of that shop, he took ill,” Rivera explains. “We had no one actually leading us, so I stepped up, and I spoke to my boss.”

Rivera was asked to fill the position until the manager’s health improved. But it didn’t.

“When he passed, it was a natural fit for me to operate the mail room and the print shop,” he says.

This led to his next job as mailroom manager in a law firm (Fried, Frank, Harris, Shriver & Jacobson) — a high-paced operation with 28 employees. “I used to work about 16 hours a day,” he recalls.

It was a good experience, but Rivera’s true love was printing, so when the opportunity came along in 2002 to run the UFT’s Printing and Mail Department, he jumped at the chance. He’s enjoyed it there ever since.

Rivera’s dedication to the UFT, a union representing more than 200,000 education and healthcare professionals working in New York City’s five boroughs, is impressive. As he told IPG for a previous article: “If someone were to call me — two, three, four in the morning — to come into the office and open up the shop, I would do it in a heartbeat, without any gripes, because this is my profession; this is what I chose to do for a living.”

As production manager of the 18-employee department, Rivera oversees not only print and mail, but receiving, supplies, maintenance, trucking and the UFT’s entire copier fleet. He prides himself on always making sure people get what they ask for. “No problem,” is one of his most-uttered phrases.

When IPG visited his office, his phone rang constantly and a steady stream of people poked their heads through his door with questions. He helped them all, quickly and efficiently, before turning his focus immediately back to our conversation. It’s all part of being a manager in a fast-paced New York City operation.

“I run the shop as if it’s my business,” he stresses, “because at the end of the day I’m responsible for it and also the staff.”

He places a special emphasis on taking care of his staff and making sure they have the tools and training they need. He’s fond of shaking hands with them to thank them for their hard work and organizes special events for them, like luncheons. 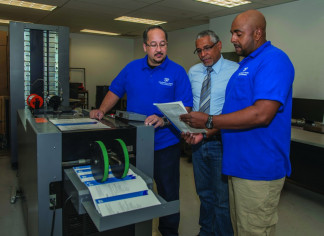 From left: Louis Lopez, Oscar Rivera and Jimmy Molina go over a job being finished on the Duplo System 5000. (Photo by Natasha Cancinos.)

“I value my staff because they make me succeed,” he praises. “They make me look good” — although he’s done a fair job of this himself. In his 16 years at the in-plant, Rivera has transformed the shop from a low-tech, slower-paced in-plant to the well-equipped, well-oiled operation it is today. It boasts the latest Konica Minolta digital presses, a trio of wide-format inkjet printers and two six-pocket Bell & Howell Phillipsburg Mark 2 Series inserter. These complement the shop’s collection of small offset presses, which include a four-color Ryobi 3404 DI.

“I take a lot of pride in what I have,” he says. He enjoys giving tours of his operation and seeing the look of surprise on people’s faces when they realize what a modern, high-tech operation the UFT has. He’s especially proud that Konica Minolta uses his in-plant as a beta site for new equipment, and even sends representatives from Japan to ask him what he likes and dislikes about it. His in-plant beta tested the Konica Minolta bizhub PRESS C8000, he says, and was the first shop on the East Coast to have one.

Into the Garment Business

Two recent additions to the in-plant are a pair of Anajet mP10i direct-to-garment printers and heat presses, which stay busy printing shirts with the union logo for various events.

“When we’re at a rally or a parade, then our presence is actually shown,” Rivera remarks.

Printing shirts in-house saves UFT a lot of money, he contends. Buying a personalized shirt outside costs $12, Rivera says. His costs are a third of that. “Now they’re actually getting a shirt for $4,” he says, “so it’s a huge savings.”

Always looking to the future, Rivera draws up five-year-plans to ensure the in-plant is adequately prepared for the needs of UFT members.

As for his coin-toss decision to become a printer instead of a chef, Rivera feels it was “absolutely” the right call. Does he still enjoy cooking?

“I fool around in the kitchen every so often,” he laughs.

Over the years, his passion for photography has grown exponentially. He and his Nikon D4 have made trips to Iceland and Ireland, with an October trip to the Grand Canyon in the plans.

“I really, really enjoy photography,” he says. He sells prints of his work at art shows and on his website: QuietStormPhotos.com.

Rivera says he particularly enjoys night photography, which he sees as a counterbalance to his hectic daytime job.

“At night I find it very, very peaceful,” he says.

Though his retirement is still years away, Rivera is sure it will include lots of picture taking, as well as spending more time with his wife Sloane and their four kids and four grandchildren. But he admits he’ll miss his job once he retires.

“I enjoy what I do for a living,” he says. “I’m going to miss the hustle. It’s always on fast forward.”

From the Editor: Out and About in NYC

Lockheed Martin: Ready for Anything

Innovation Over Tradition at Welsh University