The long lines were the clearest sign that something had to change at Bucknell University.

Thanks to the popularity of online shopping, incoming package volume at the Lewisburg, Pa., university had more than doubled between 2008 and 2017, and all of those packages were piling up in the in-plant’s Student Mail Services center. Students would get an email notifying them they had a package, and then they had to walk up to the mail services window in the Elaine Langone Center to claim them. 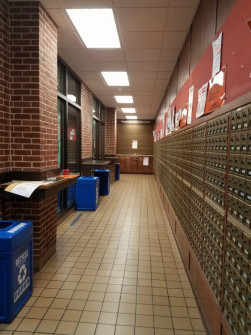 A wall of mailboxes made for a very narrow passageway in which students used to line up for their packages.

“All the packages stayed behind the service window,” explains Director Tom Lydon. “[Students] would come to the center, swipe their ID on a little card reader, and we would see what package they had and then we would go get them.”

“That was a pretty short span, so lines were quite long,” Lydon notes. “Students weren’t very happy waiting in line. We really had to address this somehow.”

So in August, Bucknell Publications, Print & Mail unveiled six new banks of package lockers, which will enable students to retrieve their own packages without waiting in line.

“They have 24 hours a day access to get their package,” Lydon says. “I think the students are going to really take to it.”

Holding a total of 498 locker doors, the locker banks are lined up back to back in the same space where student mailboxes used to be. Those have been eliminated, due to a major decline in letter mail over the past decade. (Mail will now be stored in file folders and students will claim it at the Student Mail Services window, as they previously did for packages.)

To personalize the new locker banks, the 18-employee in-plant wrapped each of them in graphics branded with Bucknell’s orange and blue colors. Each bank sports a number (1-6) and a single word from Bucknell’s mission statement: Exploration, Dedication, Ambition, Passion, Imagination or Innovation.

After opening up that wall and adding package lockers, the new space is much more inviting.

Before deciding on the lockers, Lydon and his team toured the mail operation at nearby Bloomsburg University and were impressed with its package lockers. Lydon discussed the lockers with the in-plant’s package tracking software vendor, Brynka Software Solutions, and the company worked with Luxer One to get the lockers in place.

Before installing them, the area was renovated. The wall between the lockers and the student lounge area was opened up, providing more open access.

The view from the student lounge area.

With 3,600 undergrads at Bucknell, Lydon is expecting the new lockers to be put to the test immediately. His department receives an average of 500 packages a day during the year, but at the beginning of the academic year that could jump to 1,500 a day.

As before, students will get an email or text when they receive a package, but now they will be sent a locker number and a QR code. When they get to the lockers, they scan the code, sign the screen, and the locker door pops open. Oversized packages will be kept behind the services window.

“It should really reduce the line,” Lydon observes.

Three New Challenges of the New Normal
Reopening Of America: What Will This Look Like For Businesses Across The US
END_OF_DOCUMENT_TOKEN_TO_BE_REPLACED
Upcoming Webinars
Turn Data into Dollars