If there’s one way to really make Penn State’s signature blue pop, it’s by accentuating it with silver ink from the Xerox Iridesse, says Joe Geffre, director of Penn State’s Multimedia and Print Center. Specialized printing capabilities like that are one of the reasons the 50-employee in-plant recently replaced a Xerox iGen4 that was “way past its prime” with a new Xerox Iridesse.

“It was only an iGen4, so I didn’t even have the fifth station as an option,” Geffre says. “We needed to make the investment.”

Before marketing the Iridesse’s capabilities, Geffre is giving his operators time to get comfortable with the press. The shop’s designers have gone through Xerox Genesis Initiative training to learn how to design for the Iridesse and create digital enhancements. 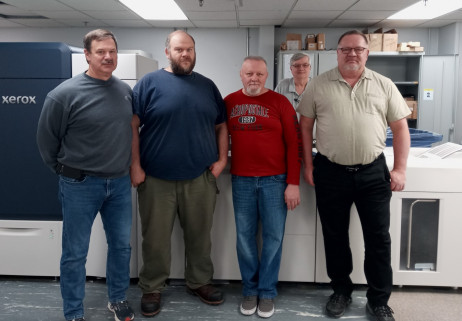 In the meantime, the State College, Pennsylvania-based, in-plant has gotten its feet wet by using the press to print commemorative cards for the Penn State All-Sports Museum honoring alumni that received Distinguished Service Awards in World War II.

In addition to the Iridesse, an HP Latex 365 and an HP Z9+ Pro were added to the in-plant’s wide-format fleet in January. The two pieces of equipment joined the in-plant’s HP 360 Latex printer.

“Now we have two pieces of equipment that are very similar … so we can turn around and output more or handle two different jobs at the same time to avoid that bottleneck,” Geffre says. 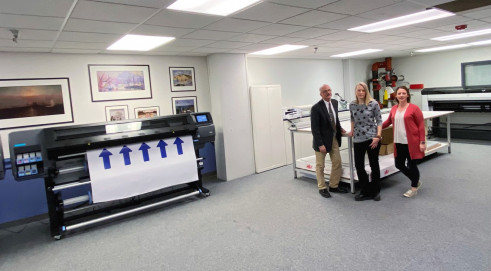 The in-plant enhanced its wide-format printing area with an HP Latex 365 and an HP Z9+ Pro. With them here are (from left) Jim Lukens-Gable, Terra Saxion, and Mandee Eckert.

As for future installations, Geffre says the shop is out for bid on a Duplo DC-746 slitter/cutter/creaser. It will replace both a Rosback perforating/scoring system and a Morgana DigiFold.

“Instead of replacing multiple pieces of equipment, I can replace it with one and do a single training,” Geffre says.

Overall, Geffre says he’s working towards a full shop modernization that he’s hoping to complete in the next three to five years.

“I’m trying to revamp the system; it’s been somewhat neglected over the years. So, I’m trying to modernize what we’re doing here,” Geffre says. “We are dedicated to continue investing in upgrading the area to meet the demands of the university.”

Watch the video below to see how Penn State's director of Multimedia and Print Center, Joe Geffre, prepared for the new press.