The demand for flatbed printing and cutting is so strong at Lake Land College, the in-plant literally can’t risk marketing it and making it more popular.

"You would be surprised at how high-tech we are here — especially for a community college,” declares David Earp, Print and Mail Services supervisor at Lake Land College in Mattoon, Ill.

Proving his point is the in-plant’s latest and most successful innovation: wide-format contour cutting.

Wide-format printing is not a new activity for the in-plant, which adopted the process in 2013 and now produces about 60% of its volume on wide-format equipment. Lacking until recently, Earp explains, was a way to cut and finish individual pieces as efficiently as the devices could print them.

Not having automated cutting meant the shop was obliged to print certain projects one by one on pre-diecut substrates and then apply and register them by hand — a time- and labor-intensive routine subject to human error. What the in-plant needed was a post-print solution that could support the full 50x100˝ capacity of the shop’s EFI Pro 24f LED flatbed printer.

The solution arrived last February in the form of a Summa F1832 flatbed finishing system, a multi-functional cutting table with a 6x10´ working surface and a computerized cutting speed up to 39.4˝ per second. With its help, Earp says, the shop can gang-run 18˝ and 24˝ circular formats on the EFI Pro 24f and then finish the pieces all in one batch, confident that they’ll be “perfectly cut every time.”

Automated precision cutting on the Summa F1832 complements “the professional look and accuracy of the printing on the flatbed,” says Earp, adding that there’s no longer any need to buy precut substrates from outside sources. SummaFlex Pro software controls the cutter’s production workflow, while Onyx RIP software handles color management for the EFI Pro 24f and the shop’s other wide-format equipment.

Adding flatbed contour cutting to wide-format flatbed printing proved to be a winning combination for the in-plant almost from the start.

Earp says, for example, that a visual rebranding on campus included a redo of wayfinding signs, all of which were produced on the flatbed printer and the contour cutter. Awards, plaques, acrylic wall graphics, holiday décor, and props for “selfie station” photo booths are additional specimens of what’s been possible with the devices, both of which can handle wood, Coroplast, PVC vinyl, and other materials up to 2˝ thick.

Earp notes, however, that despite tackling assignments as diversified as these, “there’s so much that we haven’t even tapped into.” He reckons that the shop could carry on flatbed printing and contour cutting 18 hours a day if it decided to; demand is so strong, he says, that “we have to juggle jobs” to stay ahead of the workload as it is.

Before it established itself as a wide-format print services provider, Print and Mail Services wasn’t this fully booked. When Earp joined it 10 years ago, its only color printer — indeed, the only color printer anywhere on campus — was a 32-ppm device. He says that in those days, if the in-plant couldn’t produce what was needed with the equipment it had, “people would shop out wherever they wanted to.”

Well Worth the Effort

That drove the in-plant’s initial investment in wide-format printing, and it also prompted Earp to campaign for the right of first refusal — a privilege granted to the in-plant last year.

“I worked really hard to get that,” he reflects.

This set the stage for the installation of the Summa F1832 in a space formerly used for paper storage. Unlike the EFI Pro 24f — which came fully assembled and required the partial removal of a wall in November 2017 to bring it in — the cutter arrived in several crated sections that could be set up and integrated in place. Earp notes that the cutter is housed separately from the printing equipment to eliminate the risk of paper fragments contaminating sensitive inkjet heads. 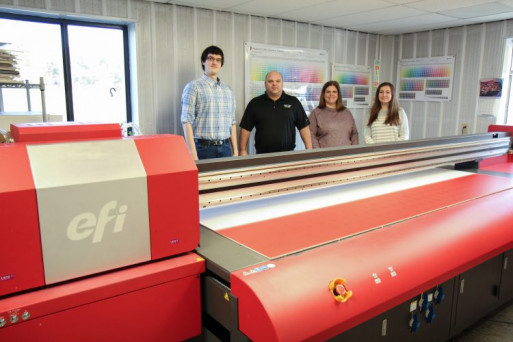 Adding flatbed contour cutting gave the shop all the assets it needed to satisfy the demands of a campus population that can’t seem to get enough of the products and services it offers. In operation for more than 40 years, Lake Land College’s in-plant employs about 20 people in a 5,400-sq.-ft. space that has more digital printing capability, according to Earp, than in-plants at state universities many times its size.

The cut-sheet hardware includes Ricoh Pro C7100 and C7100X color printers as well as a Ricoh Pro 8120 for black-and-white work. Besides the EFI Pro 24f, the formidable wide-format lineup consists of a Roland Soljet Pro4 XF-640 and a newly acquired eight-color Roland TrueVIS VG2-540 printer-cutter. The shop also has a 65˝ laminator, a 48˝ wide-format scanner, and mailing equipment for folding, inserting, and inkjet addressing.

Most of the work these devices produce comes to the shop through an EFI Digital Storefront portal that has been in place for the last four years. There’s also a walk-up kiosk where customers can either scan their jobs in or deposit the files from thumb drives. Those who need help with mounting and installation can get it from the in-plant, which puts up wall graphics, vehicle signage, and window clings on request.

Earp attributes most of the in-plant’s present success to wide-format printing, which he says “is and will continue to be the hottest trend in printing.” Wide-format output as a whole contributes the shop’s highest profit margins, and Earp estimates that flatbed printing and cutting have boosted wide-format revenue by 15% since the Summa F1832 was installed.

Upon adding a new capability, most college and university in-plants have to promote it around campus in order to drum up business for it. This is not the case with flatbed printing and contour cutting at Lake Land College.

“We don’t need to,” Earp says. “We don’t do any marketing at all. We are overwhelmed with work.” The marketing is done on the in-plant’s behalf by the school’s academic department of the same name, which has sent so many requests the shop’s way that Earp has needed to hire additional designers to keep up with them.

This also precludes insourcing. “We will not do any reaching out” to external customers, Earp states.

For now, he’s content to focus the in-plant’s energy and innovation solely on the campus population it exists to serve.

“If you don’t take care of your customers,” he observes, “somebody else will. If you’re not changing all of the time, you’re falling behind.”

Lockheed Martin: Ready for Anything