Sally Roberts of the University of West Georgia has printing in her blood, but she’s come a long way to get back to her roots.

Sitting in Sally Roberts’ attic is a tabletop single-action hand press her father used many years ago to make letterheads, business cards and even the family’s holiday cards. 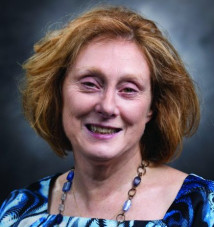 “Any excuse he could find to print something, he was right there doing it,” she says. “He loved it. It was his hobby.”

After being exposed to the art of printing at such a young age, it’s no surprise that Roberts is now the director of Publications and Printing at the University of West Georgia (UWG) in Carrollton, Ga.

Roberts was born in Rocky Mount, N.C., in what she describes as a place perfectly positioned between the mountains and the sea. When she was in sixth grade, her father, at the time a district executive with the Boy Scouts of America, took a position at UWG to work in the Division of Business and Finance, in the facilities area, where he used his physics degree to help plan for a new observatory on campus. Roberts’ mother also took a position on campus in the Registrar’s Office.

Years later, Roberts attended UWG to earn her undergraduate degree. It was then that she knew she wanted to work on campus too.

“I had always wanted to work on campus, ever since I was an undergraduate student here,” she says.

By 1993, Roberts had spent a few years putting her bachelor’s degree in English and master’s in Journalism to use as a senior reporter and photographer for Carroll Publishing Co. in Carrollton. Then she took the role of director of communications at the Southern Association of Colleges and Schools, outside of Atlanta. All the while, she yearned to return to UWG.

“When a position opened up [at UWG] in Publications and Printing … I applied to it the day it opened and kept my fingers crossed,” she explains.

Roberts was offered the job, which allowed her to work with publications professionals to write, edit and print for the university, a blend of all of her experience and passions.

It’s been 25 years since Roberts took that position at UWG and a lot about the in-plant has changed. When she started, she says, it was a tight, drafty and damp building with black-and-white copiers, two AB Dick 360 presses and a darkroom where pages were photographed to make press plates.

In 1997, the first “true” four-color press was installed, an Omni Adast. And although it had electrical issues, Roberts explains, the press ran for a good 10 years. Since then, the in-plant has added and replaced a variety of presses and services. Two recent additions were a wide-format latex printer in 2015 and a Heidelberg Polar D66 cutter in 2016. In 2013, the Publications and Printing department got an upgrade from its tight quarters with an expansion and renovation.

To combat the threat of outsourcing, Roberts and her team began compiling a chart several years ago comparing the prices of services at Publications and Printing with prices from local and regional printing companies. The in-plant created a chart outlining comparison quotes, complete with percentages to illustrate the cost differences. This clearly showed that it was more cost effective for the university to keep the in-plant than to work with outside companies.

“They came to realize they had a good thing,” she says, “and we’re glad they kept us.”

To help her manage the nine-employee in-plant, Roberts has ­designated team leaders in each of the four major areas — prepress, offset, digital and wide-format — who are responsible for their team’s work. Roberts explains that the monthly revenue is posted in the conference room to give team members a transparent view of where each team is in relation to revenue and goals. This works as a motivating factor, she says, because each team leader feels a connection and responsibility to his or her team.

However, Roberts says the Publications and Printing department employees mostly motivate themselves. She describes a time recently when the in-plant was printing a 43,000-piece job, but the client informed her on a Monday that the job needed to be printed and mailed by the end of the week. She says staff members moved around their out-of-work responsibilities to get the job finished.

“One staff member delayed a planned vacation day for his birthday, so they met the deadline a day early,” she says. “They’re incredible.”

In addition to being very involved with her staff members, Roberts has remained active in the in-plant industry. In 2013, the Publications and Printing department was named Print Center of the Year by the In-plant Printing and Mailing Association, and Roberts even gave a presentation at an IPMA conference on the topic of growing the in-plant business, expanding services and avoiding outsourcing.

Although Roberts is dedicated to her in-plant, she has a variety of interests and passions outside of her busy workday. She has horses and dogs that she spends time with outside, and enjoys camping and reading in her spare time. In fact, she recently got a new fifth-wheel camper, which she says she now prefers over sleeping on the ground in a tent.

“It’s so much easier to be in a camper,” she laughs.

Although Roberts originally intended to teach college English, and dreamed of doing so at her alma mater, she’s happy that she was able to carry on her family legacy of working at UWG in some way — a legacy that continues now that her daughter is working in UWG’s accounting department.

“I satisfied my dream of being on campus, but I did this instead [of teaching],” she says. “It worked out great.”

And if you ask Sally Roberts where she will be in a few years, her answer is simple.

“Right here,” she proclaims. “I’m having too much fun to go anywhere else.”

Join us to find out how the latest color standard advancements and controls are being used to differentiate from the competition.