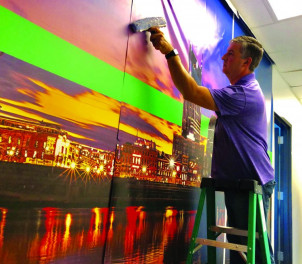 The need for more efficiency and speed prompted Kris Tanner, manager of Schneider Electric's Solutions Support Group, in Nashville, to consider the Océ Colorado 1640 as a possible solution.

While attending Canon’s Media & Analyst Event, held February 11-13, in Boca Raton, Fla., Tanner had the opportunity to see a live demo of the device at Canon’s Experience Center.  Immediately captivated by the quality of the prints and the speed at which they were produced, he quickly decided that the Océ Colorado was a must-have for Schneider Electric’s in-plant printing requirements.

Fast-forward three months and Schneider Electric is experiencing remarkable printing speeds with its Océ Colorado 1640 fully operational on the floor — a job that would previously have taken days to print can now be produced in just a few hours. For instance, Schneider Electric was able to print an order of 78 glossy posters, each 24x36˝, in just over an hour.

Schneider Electric was also awe-struck by its ability to print three 9-foot x 53˝ panels in less than 30 minutes, and with impeccable quality.

Maximize Your Wide-Format Profitability in the New World of Work