In a recent IPI webcast, still available to watch on demand, Chuck Werninger talked at length about Houston ISD’s decision to implement Canon Colorado 1640 wide-format printers and the benefits they have brought to the school district. Click here to learn more.

Any in-plant still questioning the revenue-generating potential of wide-format printing should speak to Chuck Werninger.

In July, his Texas in-plant installed a 64˝ Canon Colorado 1640 roll-to-roll printer to handle the growing demand for COVID-19-related signage in the Houston Independent School District’s 280 schools and approximately 50 other buildings. A week later, he ordered two more Colorado printers and a Colex automated cutter to keep up with demand for social distancing floor graphics, wall signage, and window clings. “We did 75,000 sq. ft. in the first two weeks, while we were training,” remarks Werninger, senior manager of IT Administrative Services. “We’ve already done more than 400,000 sq. ft. this year. We’re four months in.”

This compares to a grand total of 40,000 sq. ft. of wide-format work printed last fiscal year using an HP Latex 850. The revenue increase this year is staggering. “We’ve just about done last year’s sales already this year,” he observes. And this revenue surge is happening even as course packs and other toner work is on the wane. “We love this Colorado,” he proclaims.A year ago (when the word “corona” still made us think of beer), Houston ISD Printing Services was getting by with a used HP Latex 850 wide-format printer. It was a step up from the in-plant’s previous aqueous printer, allowing the 27-employee in-plant to start printing outdoor signage, but it had its limitations too. For one, it took two people to change rolls, which could be up to 126˝ wide. As a result, staff often waited a couple of days before doing that, just in case another job came in requiring the substrate already in place. This, and its lower productivity, started Werninger on the search for a new wide-format device.

After getting a demo of the Colorado and talking with fellow K-12 in-plant manager Steve Priesman, of Omaha Public Schools, another Colorado user, he was sold. HISD’s first Colorado arrived in July and it went right to work. “We were running it 24 hours a day, seven days a week for weeks,” Werninger says.

His staff found it much easier to operate.“One person can load media,” he says. “The press holds two rolls of media, so you can switch between rolls without … lifting.” 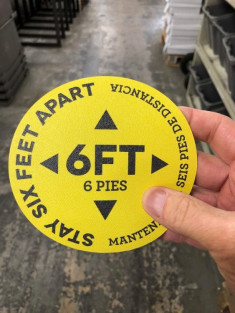 What’s more, once the operator starts the job, he says, he or she can walk away and come back in just over an hour when the roll is empty.

“It’s like office copier kind of simplicity,” Werninger praises. “It basically doesn’t need any help, and that is a huge change.”

“That’s five times what we were getting,” he remarks. Even at that speed, Werninger adds, there is no banding nor any registration problems on the output.

“The print quality is impeccable,” he lauds, thanks to Canon’s UVgel technology.

Once the two additional Colorados arrived, the in-plant kept them just as busy. In a two-month period this fall, Werninger says, the shop produced $2 million worth of signage. “Four months into this [fiscal] year, we have basically hit last year’s total sales,” he reveals. “Numbers are really healthy right now.”

Darian Craver runs one of the new Canon Colorado 1640 printers.

As for ROI on the machines, “We’ve already paid for them,” he reveals. Thanks to the Colorados, the in-plant has been able to lower its prices for this work between 30% and 40% of what it was charging last year, he adds. And this is, of course, already much lower than rates outside print providers charge. Werninger knows this very well, because the in-plant had to outsource wide-format printing for a month before the first Colorado arrived.

“It was nearly twice our price,” he reveals. “There’s just no comparison: hiring a corporation versus using your in-plant.”

To provide schools with graphics in the shapes they were expecting (i.e., circles, arrows, etc.), the in-plant installed a Colex Sharpcut Pro SXC1732 contour cutter in October. It has a 5x10´ bed, and a conveyor that moves materials at 80˝ per second. Since the Colex is able to cut rigid materials up to ¼˝ thick, the shop is using it to cut acrylic, aluminum, and Coroplast signage after applying pressure-sensitive vinyl graphics to them, as well as to cut other media like floor graphics, vinyl, and removable wall fabric. The in-plant has put together a booklet with images of its graphics and will be using it to market itself to other Texas school districts. To those in-plants still reluctant to get into wide-format printing because they don’t feel their organization has much of a need for it, Werninger urges them to ask their purchasing department where these graphics are being purchased currently and how much is being spent.

“They are buying it,” he declares. “They are spending money. You just haven’t looked at it.” 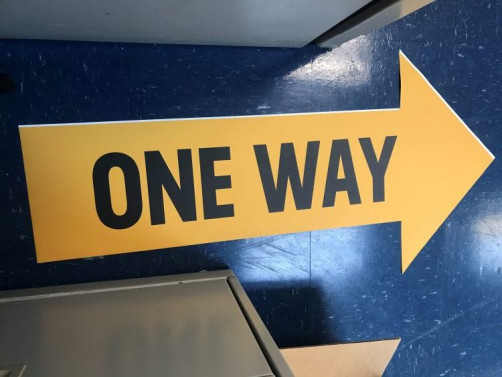 Production Inkjet: ‘It’s Not That Big a Risk’