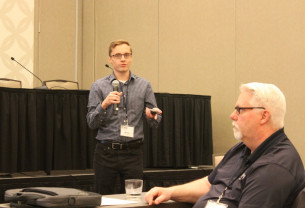 Student workers are a necessity at many higher-ed in-plants, and no school has a better program for it than Arizona State University. During one session at the Association of College and University Printers (ACUP+) conference, Westin McDonald gave an overview of how the ASU Print and Imaging Lab works.

The self-funded in-plant employs seven full-timers and 21 students, plus six contractors, and will generate $2.1 million in revenue this year. A former student worker at the shop, McDonald said the experience taught him to be reliable and how to work in a team environment.

Keeping student workers motivated and engaged requires empowering them, he said. His operation entrusts students to do more than stuff envelopes; they get trained to run most of the equipment. Management feels strongly that trusting in students’ abilities to learn higher-level tasks is a reflection of ASU’s ability to teach students career skills.

The in-plant has a performance plan that allows students to be promoted into higher-paying positions. Management shares profit and loss data with its student workers so they see how their contribution is helping the operation. The in-plant also offers other support, like resume preparation and interview coaching, and students are brought to conferences on occasion. 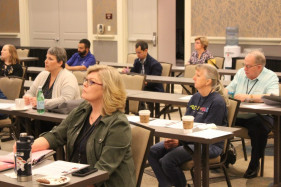 ACUP+ attendees listen to one of the many speakers at the three-day conference.

Employing students strengthens the in-plant’s contribution to the university’s mission. But retaining them, McDonald said, may require making some concessions, such as allowing occasional phone use, as long as it doesn’t impact their ability to do their job.

“It’s going to take a culture shift,” he said. “You have to meet them where they are.”

The results have been great at ASU, he noted, and several former student workers, like him, now work there full time.

“We wouldn’t be here without them,” McDonald concluded.

Working With the Next Generation: Be Clear, Be Concise

Pantone Introduces Its 2023 Color of the Year
END_OF_DOCUMENT_TOKEN_TO_BE_REPLACED