“When people come in, they stop and they can’t believe what we print out here. They’re just amazed by the quality of it,” Lyons says.

The seven-person in-plant made the decision to install the z9+ because the shop’s beloved HP z5400 was approaching the end of its lifespan. Since its installation in 2013, the z5400 printed thousands of posters, and Lyons describes it as an “absolute workhorse” that everyone loved to use thanks to the simplicity of the cartridges.

The Z9+, however, has some very attractive features, Lyons says: a vertical trimmer and two extra red and blue ink cartridges.

“The cutter saves us so much time on the back end,” Lyons says, “and with the two extra colors … people are noticing a difference.”

The shop recently printed 10 posters for an event, and the professor involved told Lyons he was in awe of how well they came out.

“I’ve actually had a couple people say ‘did you guys get a new printer? Because your stuff is always great, but now this is out of this world.’ They just see the difference,” Lyons says.

As for the internal trimmer, Lyons says it has freed up a lot of time for employees because posters that are odd sizes will come out finished with no cutting needed.

“I’m going to estimate that we save probably three hours a week now that we have the trimmer, but it just adds up because now I can finish other tasks quicker because I don’t need to worry about stopping to trim a poster,” Lyons says. 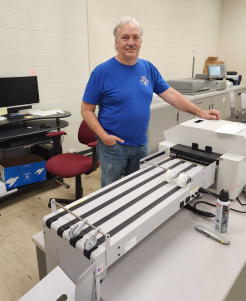 The HP Z9+ wasn’t the only addition to the SUNY New Paltz in-plant. The shop also replaced its Xanté Illumina with a Formax ColorMax8 inkjet envelope printer. Lyons says the Illumina had been worked into the ground since its installation in 2014. Though the ColorMax8 runs well, he says, the machine’s color software caused a few bumps in the road.

“Our IT department didn’t like the software at all because they thought it was an open portal for our network as far as they were concerned,” Lyons says.

The ColorMax8 was purchased in May, and Lyons says the color software was not installed until September and only after IT basically gave the in-plant its own computer specifically for the ColorMax8.
That obstacle aside, Lyons says it’s a machine he would recommend. His shop can now print window envelopes, he says, and it even just took on the task of printing envelopes for the university’s Residence Life department.

The addition of these two pieces of equipment, Lyons says, “has definitely enhanced our abilities and our quality, and we’re very happy.”