Taking Over Signage Printing From ‘Facilities’

For in-plant printing operations, a slow revolution has been taking place as the digitally driven capabilities of signage printing technologies have substantively changed what a sign can be. This move has been typified by a shift from the purely functional (e.g., a “no parking” sign) to the functional and decorative (e.g., wayfinding signage that incorporates brand colors and logos).

In many cases, this change is evident through a shift in responsibility for signage printing from the organization’s facilities department or in-house sign shop to the printing department. To explore this shift, and how in-plants have navigated these new realities, we spoke with four in-plant managers whose operations have taken over signage production from other internal departments:

All four of these in-plants are well equipped for wide-format graphics production. Denova reports that his shop, which has 20 employees, is currently running two Mimaki flatbed printers and a Mimaki UCH-V300-160 roll-to-roll printer/cutter. In the last year, Denova, says, his shop has been running more rigid work, including directional and weatherproof signage, using a range of materials for applications including regulatory compliance, column identification in buildings, and for events. 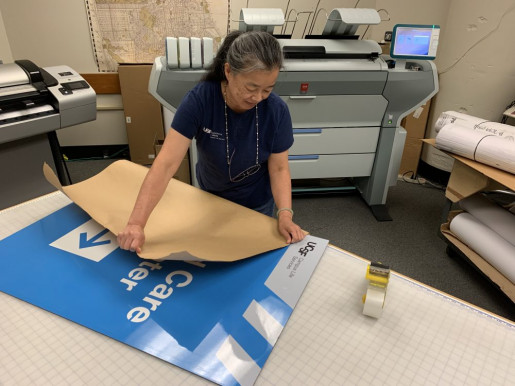 In Carmona’s operation, which has 26 employees, HP T2300 and HP Z2100 wide-format printers are used, as well as an Océ ColorWave 500. Much of the finishing is done by outside companies. The signage work his shop prints includes mainly posters on glossy stock, and fabric printing to produce pop-up displays. He says much of the signage is produced to be held by acrylic sign holders — a feature that eliminates some finishing steps.

Horbelt’s 18-person shop currently uses an HP Latex 360, a Mimaki UCJV300-160 roll-to-roll, and a Mimaki JDX2513 flatbed. Finishing technologies include lamination, sewing, and grommeting machines. The shop produces posters, Coroplast signs, and A-frame signage where the printed element slides in. She reports that the shop produces a lot of vinyl-cut window signage and vehicle markings, as well as avenue banners, which are mounted on light poles.

Thole’s 24-employee in-plant runs an HP Latex 570 printer and an Océ Arizona 2280GT. For finishing, the in-plant has a laminator, cutters, and a Colex SharpCut CNC machine. Thole says the shop “does a bit of everything,” including cutting vinyl for walls and windows, and ADA signage incorporating braille. He reports having done a great deal of COVID-related floor, window, and door graphics in the past year.

So, how did these in-plants come to assume signage printing responsibilities that once were the bastion of the facilities department or a dedicated campus sign shop?

At Iowa State University, the facilities team once handled ADA-compliant wayfinding signage, producing signs one at a time, by hand. Thole’s in-plant acquired its flatbed printer with the intention of taking that activity over. Noting that the migration started with vinyl vehicle graphics, he says his shop’s move into signage that was once done by facilities, “just kind of made sense.” He says there was no contention between his in-plant and the facilities department. 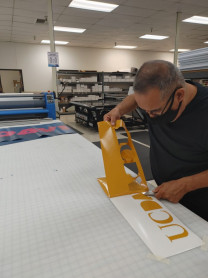 A key step was to make sure all involved supervisors and leadership were on board with the move. Between the two departments, he says, the facilities department has kept what it believes works best for it, and continues to do much of the signage installation.

Thole added that the Océ team was essential in helping his in-plant successfully produce ADA‑compliant braille and other elements on its flatbed unit. Thole believes the skills his shop brings to the table — color management, process control, and customer service — are essential.

“Our expertise is similar to that of a sign shop,” he notes.

At Lockheed Martin Missiles and Fire Control, Denova says his in-plant’s entry point into assuming more signage printing was the savings it could provide for the company. The facilities department was looking to standardize nameplates across the broader facility, and was purchasing metal plates at around $20 per unit, whereas the graphics shop could produce them on acrylic for under three dollars. Denova says it was that thinking — the drive to save money — that got the ball rolling, and that his shop leveraged that into additional applications, including dimensional signage.

From there, the operation has moved into environmental signage that “couldn’t have been done [at those quantities] before.” He stresses that, “The move didn’t happen in a vacuum. We didn’t want to take over business from [our facilities group], but instead worked to form a relationship at the intersection of the two entities.” He says he and his team worked for about a year on the migration, building relationships with stakeholders to work on an intentional, concerted plan based on doing the job better. By creating an open dialog, workable lines of responsibility were formed. Today, on some projects, the departments will share both responsibility and experience.

Carmona says UCSF Documents and Media made its first steps into wide-format printing in the early 2000s, in an effort that started with the printing of engineering graphics and blueprints. From there, his shop looked for additional opportunities to produce posters and other graphic elements for medical conferences. The in-plant’s wide-format efforts grew from there.

The big shift came with COVID-related signage. Previously, signage was handled by the facilities department, which would usually go to an outside printer for production. Carmona’s goal, then, was for the UCSF in-plant to become the center point for signage. The university’s COVID response, which led to constant signage changes amid the shifting requirements for mask wearing and social distancing, served as the crucible in which a new working relationship could be formed, including a chance to redistribute some labor. 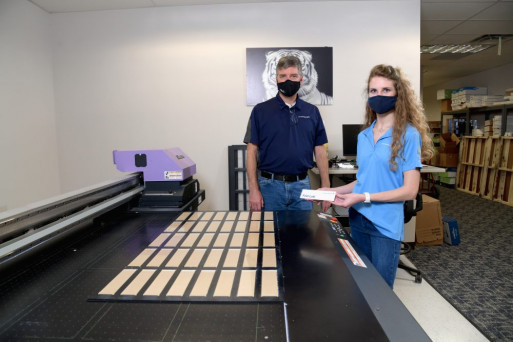 Kirk Blomquist and Cristin Morgan stand with Lockheed Martin Missiles and Fire Control’s Mimaki flatbed printer, set up with a jig that allows 40 acrylic name plates to be printed at once.

To distinguish which jobs go to his department and which go to facilities, he says, “It’s a little bit of deciding where the job fits, and deciding where the line is.” His approach, he says, is to ask for forgiveness instead of permission, noting that even if his shop does the production, facilities still handles the installation.

At UC Davis, Horbelt relates, signage was not handled by facilities; it was done by transportation and parking services, which had no full-time employees and produced signage only occasionally. This led to a situation where, when a sign was needed, it could take between four to six weeks to produce.

As with Carmona’s shop 75 miles away, the challenges of COVID-related signage gave Horbelt’s in-plant a chance to shine. It was able to respond more quickly, and create workable floor graphics. In response to this, transportation and parking services offered to partner on signage — a partnership that ultimately became a full acquisition.

Horbelt says her department brought customer service to the table, along with a lot of experience handling “quick turn” work. This contrasted greatly with the other department’s more “institutional” approach to signage printing.

“I met with the director of parking, and created a proposal for how the duties would be divided,” Horbelt says. “By doing this, it makes my department more valuable. The acquisition was not a hostile takeover. Parking really wanted to get rid of signage because it wasn’t really their business.”

It is important to note that none of these four in-plants experienced a contentious situation in the process of partially or fully taking signage printing over from another department. In all cases, communication, planning, and careful negotiation helped each effort make sense to all parties involved.

“It was so important to have the relationship in place and to not have it be an adversarial approach,” notes Denova. “It’s a partnership that benefits the health of both departments.”

These in-plants share a commitment to customer service, to quality standards, and a closer connection to the techniques and materials used in modern, digitally focused sign shops.

“We’re a better fit because of our expertise in print: layouts, brand standards, color, and quality,” emphasizes Carmona. “We’re used to keeping with the brand feel of UCSF.” 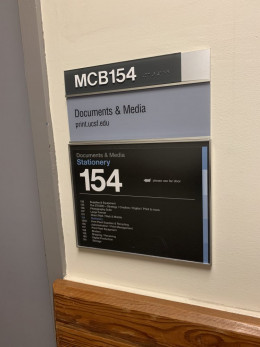 “A lot of universities are not maximizing their abilities on campus to do wide-format work,” she observes. “They need to look and see what can be done; it’s very profitable work. By being aware of what’s happening on campus, they can see the opportunity, and find out who’s doing the work instead.”

All totaled, however, it’s about more than simply gaining work from another department. It’s also about doing it better and, in many cases, more economically.

“When looking at ADA-compliant signage, we really had to think through what we were doing, and we needed to do the job legitimately,” says Thole. Doing the job well required the input of numerous departments, including the university’s department of equity and inclusion, he notes.

For in-plants seeking to leverage skills and knowledge to access additional work currently done by other departments, opportunity exists. Those that can do so successfully, according to these managers, must do so carefully, and with intention.

Pantone Introduces Its 2023 Color of the Year
END_OF_DOCUMENT_TOKEN_TO_BE_REPLACED