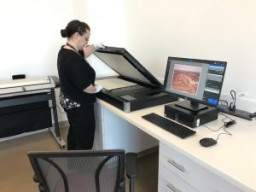 Contex, the world leader in large format scanning, announced that the University Archives of Texas A&M University-Central Texas uses Contex large format scanners to preserve history like never before. The University Archives installed an IQ Quattro roll-fed scanner and IQ FLEX flatbed scanner at its new facility located at Heritage Hall, which opened in January, this year. The Contex scanners boost staffers' scanning productivity by up to 50%, thanks to quick scanning speeds and Nextimage software, which simplifies functions such as cropping, rotating, and editing, especially for delicate material.

“I really enjoy using the Contex scanners. They’re very easy to use and intuitive,” comments Victoria Eastes, University Archivist, Texas A&M University-Central Texas. “The Contex scanners allow us to accommodate a variety of material, and save us time so we can focus on the collections themselves versus the scanning.”

“High-speed production in archiving scanning is important, considering that these projects can take time,” comments Doyle Cryer, National Account Manager, National/Azon. “Every time a document gets touched or moved, it opens chance for mistake. Contex scanners are important tools in archiving because they eliminate repeat steps, and the speed of the scanner is unsurpassed.” Cryer adds, “More than inches per second, the intelligence in the scanning system adds quality assurance directly into the scanning workflow, at the operator level. There’s no rescanning. There’s no going back.”

The University Archives boasts numerous collections that document the history and development of the institution, as well as nearby Fort Hood Military Base, Bell County (home of the U.S. Army 1st Cavalry Division) and the surrounding communities. The archives include papers from General Robert Morin Shoemaker’s personal collection, as well as census books from the oldest church in Texas, dating from the 1890-1910s. The archives also boast the Colodny Collection consisting of nearly 500,000 documents from the author Len Colodny, including newly declassified documents and other materials related to the Nixon Administration and the Watergate scandal.

To build up its collection, the University Archives plans to offer a Community Scanning Day to encourage residents to bring their personal collections to the Archives to obtain preservation-quality copies of their heirlooms. A notable collection contributed from the community is the work of famed photographer John Mercer. Mercer produced aerial photography of one of the largest Army military bases, Fort Hood in Killeen, Texas, as it was being being built in 1960s.

The University Archives’ rooms are kept at 62 degrees and the futuristic-looking space, with its white walls, expansive counter space, and powerful scanners, is ideal for immortalizing local heroes and legends.

The IQ Quattro is Contex’s 4th generation CIS scanner. The precision scanner captures every detail because of its advanced 48-bit CIS technology and 1200 dpi optical resolution, with a scanning speed of 14 ips.