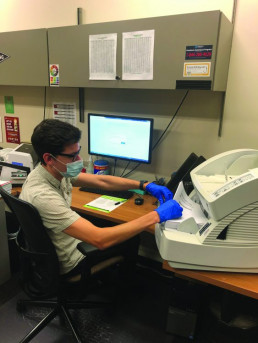 There is no getting around the proverbial elephant in the room: COVID-19 has changed the way in-plants operate. And for those that handle mail (55% according to 2020 IPI research), the challenges have been even greater. Not only have mail handling procedures been affected, delivery routes have been altered and new solutions have been needed to get mail to staff who are now working from home.

One of those solutions is mail scanning and digital delivery. Richard L. DeVries, associate director for IT Business Services at Calvin University in Grand Rapids, Mich., says his in-plant switched to this model out of necessity right at the beginning of the COVID-19 outbreak.

“Back in March, our entire campus moved to remote learning, and every employee capable of working from home was asked to work from home,” he says. “We quickly realized there was going to be some difficulties getting mail — especially the time-critical mail — delivered, so we came up with a plan.”

That plan, he notes, was to open all incoming first-class mail and scan it on the in-plant’s Ricoh Pro C9100 and C8100 digital printers, then route it to a central mailbox. An employee would then go through the files and individually mail each piece to the correct person.

DeVries notes that there are a few factors that make this feasible for his operation right now:

Calvin University isn’t the only in-plant to add mail scanning during the pandemic. Other university and government mail centers have posted about their transition to mail scanning on in-plant electronic mailing lists. One in-plant that got a big head start was DMBA Central Services in Salt Lake City, which introduced mail scanning when the technology was still in its infancy.

“Over the course of roughly 18-20 years, it has evolved from being an all-paper workflow manually handing everything off, to an almost all-digital workflow where everything coming in is getting distributed digitally,” says Director Mike O’Hara.

As an insurance company, DMBA deals in several standardized forms, which is where the original push for mail scanning started, O’Hara notes. Inputting information manually from those forms sometimes introduced errors, and there was no way to track who was inputting them, how long a claim was taking to be processed, etc. So the mail scanning process began with scanning all of those forms into a system that routed them to the departments that handled the claims.

At first, O’Hara says, it was still more of a hybrid system, much like what DeVries has implemented; while the documents were scanned in, the recipients still had to manually pick up the actual pieces. But after several years, the in-plant upgraded the operation, adding a dedicated workflow system. It currently uses a Kodak Ingenuity 9090DB scanner and two Fujitsu fi-6670A scanners for OCR scanning.

“And that’s when things started to become a little more automated,” says O’Hara.

Today, the mail scanning has grown to encompass all of the mail, not just a few standardized forms (with the exception of magazines or periodicals, which would be impractical).

Because the in-plant has had this system in place for so long, says O’Hara, “COVID has been a challenge, but not a huge challenge.” He went on to note that, “because we are doing so much digitally, really the challenges are just within my department. We have about 400 people [in the organization], and we have 95% working from home as a result of COVID. With my department, we still have to go physically pick up the mail, open all the mail, prepare it for scanning, and physically scan it, so I have a rotation of 10 people, and have five come in on a daily basis to do some of those processes. But after that, because it’s digital, the other departments in the company have been able to work from home, without having to come in very often — at least not for reasons like picking up a document or creating a transaction.”

Like DeVries has experienced, O’Hara notes that mail scanning does have additional benefits, especially when it comes to how fast mail gets to the final recipient. DMBA’s volumes are much higher, since the organization processes insurance claims, and O’Hara notes that at one time, before digital was introduced, it could take as long as three days to get a piece sorted and delivered.

“Now, everything is same day, and a lot is within hours, either in the workflow queue or in their email,” he notes.

Beyond saving the organization time, O’Hara says there are longer-term cost benefits to mail scanning as well.

“Money we spend on the technology — both hardware and software — we’ve made up for in [fewer] human resources,” points out O’Hara. “We have a smaller team now than what we used to have.”

Central Services is in the process of upgrading again to introduce more advanced OCR (optical character recognition) software that can automatically recognize what a mail piece is and sort it, without the need for human intervention on every piece. While not perfect, and still needing human eyes to verify some pieces, it is a step toward full automation.

O’Hara also says that because people are getting their mail faster, and in a workflow stream that makes others more efficient, he is able to diffuse some of the costs to other departments in the organization. While that’s not necessarily a model every in-plant can follow, for those looking into mail scanning, it is worth checking to see if the organization would consider such an option.

Is It Right For You?

The question, then, is whether mail scanning is right for every in-plant, and if so, where to start. For O’Hara, it’s not really a question.

“As far as other in-plants go, I can’t see how it wouldn’t benefit them,” he says. “If they’re dealing with inbound mail and trying to make sure they get it all delivered in a time-efficient way, I can’t think of a reason I wouldn’t recommend it.”

DeVries is less certain, but believes it’s at least worth considering, if the finances make sense. He hasn’t done a cost analysis yet to determine if it will be beneficial to keep the service beyond the pandemic.

“We’re not buying extra software and have available staff time — and we’re dealing with the COVID situation — so it really makes sense right now,” he says.

But since the “work-from-home genie” won’t be going back in the bottle any time soon (as much as 30% of the workforce may continue working from home after the pandemic), mail scanning, even for small operations, is most likely a service that is here to stay.

Should You Do It?

Here are a few considerations to help you decide if mail scanning is right for your in-plant: