Like many in-plants, Central Services at Deseret Mutual Benefit Administrators (DMBA) sends staff to the post office every morning to pick up the incoming mail for the Salt Lake City-based company. But then something strange happens; they don’t deliver it — at least not in the conventional way. 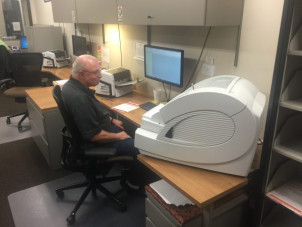 The 19-employee in-plant is in charge of scanning incoming mail and distributing it electronically to the correct departments at DMBA, an administrator of employer-provided medical, dental, vision, life, disability, retirement and savings benefits. This process has created transparency and efficiency throughout the company and enhanced the in-plant’s value to DMBA.

“The paper stops in our department,” says Mike O’Hara, manager of Central Services. Indeed, most employees never see their paper mail. He estimates that up to 95% of it is opened with an Opex Omation 206 Envelopener and placed into batches according to department (e.g., retirement, medical, dental, etc.).

“And then we scan those batches into either an indexing or an OCR system,” O’Hara says. 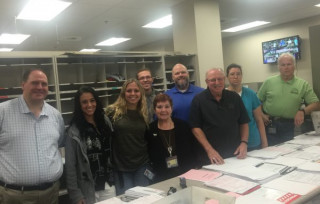 A pair of Fujitsu FI 6670A scanners handles OCR scanning of certain medical and dental claim forms. Software from ComCom Systems flags suspicious characters (e.g., 1 versus I), which are validated by staff. Any documents not in a standard format go through a Kodak Ingenuity 9090DB scanner using KOFAX software and are turned into TIFF files for indexing.

“From there, those documents will go into a workflow system and get routed” to departments, O’Hara explains.

Each department receives its mail — claims, loan applications, etc. — and begins processing it. In some cases, digitizing documents enables hands-off processing, O’Hara says; if a medical claim scanned via OCR has no flags and no additional information is needed, a claim check is automatically generated.

“So that basically cuts the turnaround time on a check by about 10 days,” he says.

Thanks to the efficiency of document imaging, he says, the in-plant has been able to reduce its staff size over the years. “We save the company money and resources,” O’Hara notes.

DMBA has been doing document imaging for 18 years. Twelve years ago, Central Services took over scanning and in 2010 introduced the K2 workflow system. At that point the scanning of indexed documents shifted from a back-end process (imaging after departments opened their own envelopes) to front-end imaging (imaging prior to distribution). It’s made a world of difference. For one thing, digital files can’t be lost as easily as paper documents.

“With the workflow system, there’s complete transparency from beginning to end,” O’Hara points out.

He notes that medical claims submitted by mail have dropped significantly over the years, so he and his staff have gone to other departments in the company to show them how document imaging can bring efficiency. As a result, nearly every department now utilizes the in-plant for document imaging.

“That’s made us a much more efficient company in terms of how we deal with paper,” he notes.

He feels that document imaging is a service other in-plants should consider offering, especially if they are in charge of incoming mail.

“It makes it easier to distribute everything,” he says.

Overall, providing this service has boosted the in-plant’s status in the company and put it in a stronger position, he says.