The Benefits of Workflow Automation

In-plants are experts at doing more with less: less money, less time, less labor. But to dwell on “less” overshadows the possibilities of “more”: more opportunity, more profitability, more jobs in the queue. At the nexus of these concepts is automation, primarily through software.

In-plants are increasingly automating their operations, recognizing the productivity benefits of reducing touches and steps. Here are some examples:

Lauren Tarbet, coordinator of distribution and printing services at Pflugerville Independent School District, runs an eight-employee in-plant on the outskirts of Austin, Texas. Using a fleet of Ricoh 8320 and 7210 printers, as well as a 60ʺ HP latex wide-format printer, the shop produces classroom materials, tests, flyers, banners, and more for the district.

While the shop’s automation software was implemented before she took her position, she has heard what it was like before automation.

“It was a mess: hard copies, filling out of forms,” she says. By using workflow software from Rochester Software Associates (RSA), the number of jobs produced daily has ballooned from 200 in 2013, to as many as 1,200 today.

For Simpson, the need for automation stemmed from having a small staff and limited time. Using both PitStop Pro and Switch software from Enfocus, the shop can spend most of its time printing, instead of fiddling with persnickety files in prepress. For instance, he says the ability to rescale a multi-page booklet with a few clicks is a vast improvement compared with the manual readjustment of each page. Another strong benefit, he adds, is in job tracking, which is done by the shop’s MIS.

“We had a great reputation for higher-end work,” says the director of business operations, “and wanted to produce more without more staff.”

His nine-person shop prints a variety of classroom handouts and perfect-bound books on its Xerox Versant and Nuvera printers and uses an HP Latex wide-format and a flatbed inkjet printer for larger graphics. With automation in place, he says, the Overland Park, Kansas, shop went from producing 10,000 orders per year — with a lot of manual steps — to today producing 200,000 to 300,000 orders annually. 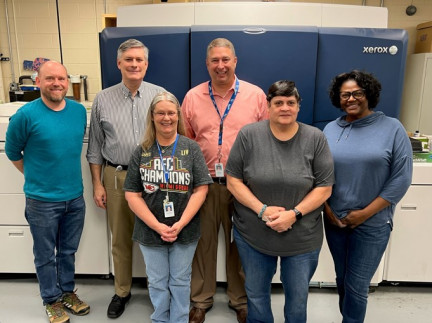 Meanwhile in the financial services space, Wolters Kluwer’s in-plant in St. Cloud, Minnesota, is charged with printing and mailing, within a short and federally mandated window of time, regulatory notifications based on consumer lending, including mortgages. What makes automation so critical for the 18-employee shop, overseen by operations manager Tom Markman, is that lenders are required to disclose rates and terms within 72 hours. If e-communication is not received by the consumer, then a paper copy is printed and sent. 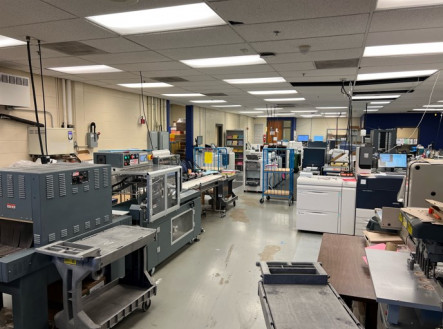 The goals of automation at Pflugerville ISD’s in-plant were to get rid of many of the printers and copiers spread across the district’s campuses, and to allow teachers more instructional hours in their week. Using RSA’s WebCRD software, teachers can initiate print jobs through an online portal, which saves them from having to fill out forms and wait for delivery. In the in-plant, the job is automated directly into the print queue.

“About 80% of jobs autoflow to the system,” Tarbet says, “while 20% still need intervention.” She notes that wide-format work tends to be more complicated, often involving design adjustments.

Gillam’s experience at Blue Valley Schools is somewhat similar: “Office copiers were being worn out,” he says, “so we needed to help those age more gracefully.”

But to do so, and to centralize printing to the in-plant, shorter turnaround times were required. An additional goal was to save time for teachers.

“Workflow became critical,” he says, adding he knew that if the shop built an effective system, it would be used. The district’s current system, which runs on WebCRD using an all-PDF workflow, enables teachers to use “a shopping-cart experience” to select from standardized assignments, indicate needed quantities, and submit the job.

Eliminating numerous manual touches, including those addressing billing, chargebacks, and invoices, was a challenge for Simpson’s shop at East Baton Rouge Parish School System. Using PressWise, a multifunctional system from Smartsoft, he says, these steps are handled without touches.

“Now it takes no labor,” he says. “Jobs come into the queue for preflight, then to the printer.”

Because of his in-plant’s efforts toward automation, he says, a significant labor reduction was possible. “It has allowed us to keep volume and sales with less people,” he says. “We’re better at being on time, and the software helps with tracking — better than using paper tickets.”

Markman’s time-sensitive deadlines are non-negotiable: his operation must produce and mail 100% of work received before 4:00 pm each day. He says that prior to implementing this automation solution, processes were chaotic.

“It was impossible,” he says. Because all packages distributed by his operation are one-offs, he was not able to find a software solution that could do what was needed.

“We took great ideas and built our own,” he says. “It took probably six months, and we’ve had it in production for about 10 years.”

He adds that tweaks and upgrades have taken place during that time. Now, with a process in check and a reliable system in place, Markman’s shop regularly produces — on time — 8,000 packages a day and can reliably scale up to as much as 15,000 per day during peak times.

For the in-plants featured here, the success of their automation efforts is measured in a handful of ways. Some operations have been able to produce a dramatically larger number of jobs per day. For Markman, it’s all about on-time delivery, and handling growing volume within a time window his shop has been able to stretch by six hours. For Simpson, one measure is the money saved in labor costs: roughly 80 hours per week in time saved. He has also seen success by minimizing — even eliminating — the time many jobs spend in prepress, and time spent tracking jobs. For Tarbet, the goal is more aspirational: to make it easier on the district’s teachers. She estimates a saving of one to two hours per day, per teacher.

For the three school districts covered here, the results are also emotional. Customers send them gifts, pizzas, and baked goods to say “thanks.” They are thoughtful evidence of the benefits automation can bring.