Printing an average of 65 million monochrome impressions annually, and another 6 million full-color impressions, Thrivent Printing and Inserting Services, in Appleton, Wisconsin, is no small operation. It’s a very diverse in-plant that not only regularly meets all the needs of the financial services company, it also wins awards while doing so.

Last year, the in-plant won two gold and two silver awards in the In-Print 2021 contest in a range of categories: booklets, invitations, stationery and greeting cards. Notable on these pieces was the use of embellishment features like gold and clear toner. The bulk of this embellishment was produced on the in-plant’s Xerox Iridesse.

One exceptional piece was a personal trust booklet, produced for a division of the company that was looking for “a presentation piece to lay out all the services they can provide, and how it would work along with managing their assets,” says Brett Birnschein, manager of Printing and Inserting Services. “They were looking for a polished, high-impact piece.”

After experimenting with both equipment and substrates, Birnschein and his staff landed on a design that used a soft-touch, two-tone stock with gold lettering and white toner on the outside for a striking piece. While the in-plant initially produced a few thousand to keep in inventory, whenever the stock falls to a set level, it prints another batch.

Another piece, the Comfort & Joy & Giving Employee Invitation, was created during the first year of the pandemic, Birnschein says.

“In the past in the office, the company always hosted a nice holiday celebration, and that wasn’t a possibility [during COVID-19],” he says. “They still wanted to do something, so they ended up hiring Pentatonix to do a special concert for the staff, and wanted to have a ... high-impact invitation.” 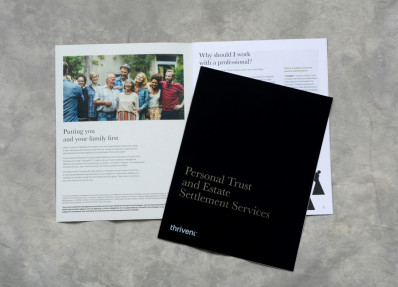 Two of the award-winning pieces printed and embellished by Thrivent Printing and Inserting Services. 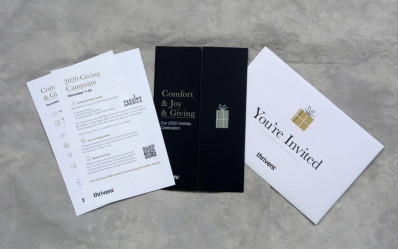 The in-plant used a black card stock with gold and white toners to do both the lettering and the graphics, as well as a gatefold, which Birnschein says was a first for the in-plant.

“We would usually have done a bi-fold, but they were looking for something special,” he says. The staff experimented again, and found they could produce the gatefold on their equipment easily. The in-plant custom-printed graphics on the envelopes for the piece as well, for a complete package that caught the attention of the In-Print judges.

The in-plant won a silver award for a 9x12ʺ flat envelope that was used to send out the materials to the Thrivent field staff about the conferences held in different locations around the country. When the in-plant acquired an iJet envelope press, it showed the creative team samples that demonstrated its ability to print edge-to-edge, which generated the idea of printing photos of the various event locations on the envelopes themselves to help build excitement. It went over so well, the team repeated the idea for this year’s conferences, Birnschein says.

The fourth winning piece was the Bright Holiday Season Christmas card. This, notes Birnschein, was designed entirely by the in-plant staff, with a goal of showing off the capabilities the in-plant has to offer.

“We went all out and used as many of the tools as we could,” he says. “Black paper stock, white and gold letterings, clear toner, etc. It wasn’t just a holiday card thanking them. It also showed them what we can do for them in the future.”

To produce these stand-out projects as well as all the other pieces needed by Thivent, the in-plant has 10 full time staff members, plus six production support technicians that are trained for multiple positions throughout the building, not just the in-plant. This flexibility allows those staff members to step in when someone is out for any reason, or during particularly high-volume times when extra hands are needed. The in-plant also brings in up to eight temporary staff members when it is time to produce quarterly statements, the busiest time at the in-plant.

In addition to the high volume of printed impressions, the inserting team will process around 12 million packets annually, says Birnschein, and with the iJet, the shop produces as many as 450,000 custom-printed envelopes in-house as well.

“We also do quite a bit of wide-format,” he notes. “That dropped off when COVID-19 hit, so last year we only did around 200,000 sq. ft. of that. I think it will pick back up though — we’re starting to see more orders come in recently as things open up, and there are opportunities to do things in-person again.”

All told, the in-plant has more than 17,000 sq. ft. of floor space. It uses a Xerox Iridesse, a Xerox Versant 180, five Xerox Nuvera presses, and an Epson Stylus Pro 9890 for it’s wide-format work. The vast majority of the work is transactional documents, such as statements and billing documents, as well as contract pages. Birnschein notes that the in-plant also does quite a bit of marketing work alongside the creative team, including postcards, direct mailers, and booklets. The in-plant produces around 40 different support items for the sales staff, including business cards, letterhead, and envelopes on demand.

The Iridesse, in particular, has led to a lot of new ideas for Birnschein and his team, opening up new ways to communicate, and sparking creativity. Originally, however, the embellishment abilities weren’t what drew him to the press.

“We needed a machine that could handle the large quantity of work we produced, and this looked like it checked off a lot of the features we were looking for,” he says, including better quality than the aging equipment it was replacing, and increased capacity.

“We were just looking at it as a basic CMYK printer,” he continues. “We knew it had embellishment capabilities, but that wasn’t a direction we were going with it to begin with.”

Then in 2020 Thrivent decided to do a major rebranding, updating not just the color palette, says Birnschein, but “everything about the brand.” The entire look and feel of every piece the organization produced was updated, with an overall black-and-white theme.

“One of those pieces was the business cards,” says Birnschein, “and they wanted a two-tone look — white on the front and black on the back. When we got those designs, the creative team was going to do all black toner to get that face, but ... Xerox cautioned us that would be hard on the machine.”

He knew the Iridesse had the ability to print special toners, and his substrate supplier had sent a packet of samples that included a menu printed with white toner on a black stock.

“I really liked how it looked, so I brought that to the creative team as an option,” he says.

One of the samples, he notes, actually had the two-tone look already, with two papers bonded together, and everyone liked the overall look and feel, so “we quickly worked to do the field upgrade to add those specialty toners so we could print these,” says Birnschein.

While the majority of the embellishment work today is still on the business cards, Birnschein says the team did start experimenting with other ideas, since they had opted to add silver and clear at the same time they added the white. And just recently, the shop added a fourth specialty toner, true gold, since it had started to do more projects requiring that color. Previously, the in-plant produced gold by printing white toner first, and then CMYK on top. The new addition allows the in-plant to print richer pieces with a true gold alongside the other effects.

Adding embellishments doesn’t actually require much for the in-plant — the biggest challenge is actually in the creation of the file. Birnschein notes there was a learning curve for the creative team at Thrivent in how to layer the embellishments so they would print correctly when they got on press. But other than that, he says, the most it requires is occasionally switching toners based on the project depending on whether they need an overlay or underlay. The end result was more than worth the extra effort.

“It allowed us to meet brand standards in a very cost-effective way,” says Birnschein. “That business card was a very specific design, and we produce a lot of them. We wanted to know we could do it reliably and with good quality long term, and this was the best way.”

As Thrivent continues to grow, Birnschein sees embellishments becoming a bigger part of his operation in the future. “Now that we’ve added the gold toner, and the creative staff has gotten used to the capability and want to look for more ways to take advantage of it, I think it’s going to grow,” he notes.

The entire Thrivent business model is “centered around putting clients at the center of what we do,” says Birnschein, “so for me it is about keeping our internal business partners at the center [of what we offer], understanding their needs and desires, and making sure we can accomplish them.”

And whether that means embellishments, new presses, new finishing, or something else entirely, Birnschein will make sure his in-plant is ready to tackle whatever new challenge might come his way.

Pantone Introduces Its 2023 Color of the Year
END_OF_DOCUMENT_TOKEN_TO_BE_REPLACED