To Nexfinity and Beyond

John Sarantakos knew he was looking at something revolutionary when he first set eyes on the new Kodak Nexfinity digital press at a demo in Rochester, N.Y.

“We were just blown away by it,” recalls the director of University of Oklahoma (OU) Printing Services.

“The things that I saw when I was in Rochester convinced me that the new imaging and inking systems were substantially better than the old technology.”

A NexPress user since 2009, Sarantakos was very familiar with that technology, and the thought of advancing to the next level was too tantalizing to pass up. So in May, the 80-employee in-plant became the first print operation in the world to purchase and install the versatile sheetfed press.

“It is very exciting,” enthuses Sarantakos, who anticipates using the device to further increase the in-plant’s digital printing volume. Revenue from digital printing already makes up about 35% of the shop’s sales, he says. The in-plant is retaining its existing Kodak NexPress SX3300, and Sarantakos is confident there will be enough work to keep both of them busy. In fact he expects the workload to increase.

“I think it’s going to expand some markets, particularly the short-run variable data market,” he says. “That part of our business has really, really grown.”

The Nexfinity has already been used for some variable data jobs, like a thank you card featuring different photos for different recipients.

The key thing that impressed him about the Nexfinity was the quality of its output, he says, which is noticeably better thanks to Kodak’s new Dynamic Imaging Technology, which applies algorithmic adjustments to specific areas of an image, optimizing image quality and consistency based on the image content in each area. The Nexfinity’s LED writing system provides 256 levels of exposure on the imaging cylinder, yielding excellent, consistent quality.

He says this is most apparent on the posters the shop has printed using heavy ink coverage. They look outstanding.

“No banding. No streaking,” he affirms.

What’s more, on the Nexfinity, the sequence of the five color stations can be switched so white can be printed first on darker substrates, before cyan, magenta and yellow, yielding more color vibrancy.
Sarantakos looks forward to continuing to use digital print enhancements like Gold and Dimensional Printing on the Nexfinity, which have proven popular with customers.

“The Gold really took off,” he notes, particularly on invitations, certificates and book covers. The texture on the Dimensional Printing produced by the Nexfinity, he says, is even better than what the NexPress produced. 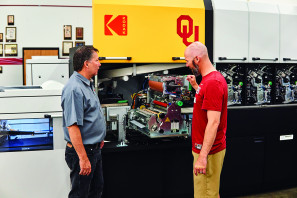 He is pleased with the Nexfinity’s increased speed of 120 ppm, along with its ability to handle stocks up to 24 pt. The in-plant added the 48˝ long sheet feeder, which will allow it to do more posters. Also, he adds, “It will print edge-to-edge.”

Another handy addition is the new Kodak Multi-Press Station which allows press operators to handle multiple jobs on both the Nexfinity and the NexPress from one location.

“You can have one guy running two machines,” notes Sarantakos.

With so much digital printing firepower, you might expect that OU Printing Services is moving away from offset printing, but Sarantakos insists this isn’t the case. In fact, the in-plant installed a rebuilt eight-color 28x40˝ Heidelberg press in December with an aqueous coater, infrared drier and Sentinel ink management system. It replaced the shop’s older eight-color and five-color presses.

“We have sufficient offset work to justify the new press,” he says, noting the high-end magazines and books the in-plant prints. Still, he acknowledges the continued migration of offset work onto the digital presses, and anticipates this will increase with the Nexfinity.

“It’s going to allow us to go higher than our typical 1,000-unit break even before going offset,” he anticipates — perhaps as high as 1,500 units, he speculates.