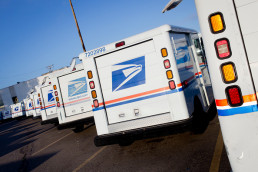 The U.S. Postal Service announced its financial results for the second quarter of its fiscal year 2022 (Jan. 1, 2022 - March 31, 2022), reporting an adjusted loss of approximately $1.7 billion for the quarter, essentially flat compared to the same quarter last year. Adjusted loss excludes non-cash workers' compensation adjustments for the impacts of actuarial revaluation and discount rate changes, which are outside of management's control. On a U.S. generally accepted accounting principles ("GAAP") basis, the Postal Service had a net loss of $639 million for the quarter, compared to a net loss of $82 million for the same quarter last year.

During the quarter, the Postal Service also delivered approximately 320 million COVID-19 tests to the American public and continues to deliver as it receives requests from American households.

First-Class Mail service performance improvements are ongoing, and last week First-Class Mail was delivered on-time 93 percent of the time. One of the goals of Delivering for America, the Postal Service's 10-year plan for achieving financial sustainability and service excellence, is to meet or exceed 95 percent on-time service performance for all mail and shipping products once all elements of the plan are implemented.

"During the quarter we made strong strides in on-time service performance, demonstrated the effectiveness of our network through the delivery of COVID-19 tests, and continued to aggressively implement key aspects of Delivering for America, our 10-year transformation plan," said Postmaster General and CEO Louis DeJoy. "Our financial results this quarter demonstrate the challenging nature of the current inflationary economic environment as we make structural progress in balancing longstanding revenue and cost imbalances and returning the organization toward financial sustainability."

The Postal Service's operating revenue was approximately $19.8 billion for the quarter, an increase of $896 million, or 4.7 percent, on volume growth of 886 million pieces, or 2.9 percent, compared to the same quarter last year.

Marketing Mail revenue increased $512 million, or 15.9 percent, compared to the same quarter last year, on volume growth of approximately 1.2 billion pieces, or 8.4 percent. Marketing Mail experienced steep volume declines at the onset of the pandemic but has been rebounding as the economy continues to recover. Marketing Mail has generally proven to be a resilient marketing channel and its value to U.S. businesses remains strong due to healthy customer returns on investment and better data and technology integration. Revenue grew at a greater rate than volume due to price increases.

First-Class Mail revenue increased $296 million, or 5.0 percent, compared to the same quarter last year, despite a volume decline of 82 million pieces, or 0.6 percent, due to continuing migration from mail to electronic communication and transaction alternatives. First-Class Mail volume remains lower than pre-pandemic levels and we expect continued secular declines. Revenue grew despite the decline in volume due to price increases.

Shipping and Packages revenue increased $98 million, or 1.3 percent, despite a volume decline of 94 million pieces, or 5.0 percent. Higher package volumes in the prior year were due to the pandemic-related surge in e-commerce, which continues to abate as the economy recovers and market competition intensifies. However, Shipping and Packages volume remains higher than pre-pandemic levels. Revenue grew despite the decline in volume due to price increases.

Workers' compensation expense increased by $477 million, compared to the same quarter last year, due to the impact of changes in discount rates and actuarial revaluation, which are outside of management's control.

Other operating expense increased $369 million, or 14.4 percent, compared to the same quarter last year, as inflationary pressures have led to higher average fuel prices for delivery vehicles and an increase in rent and utilities.

"While our operating revenue grew compared to the same quarter last year, we have been challenged by rising costs due to inflation, leading to an adjusted loss for the quarter. We continue to aggressively manage our business by optimizing our network, maximizing productivity, and aligning our pricing strategies with organization and marketplace needs," said Chief Financial Officer Joseph Corbett. "We remain on track to achieve break-even performance for the ten-year period from FY2021 to FY2030, reversing the $160 billion in projected losses over the same period."

The following table presents revenue and volume by category for the three months ended March 31, 2022 and 2021: 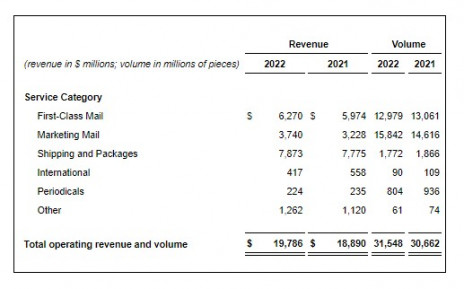 This news release also references controllable loss, which is not calculated and presented in accordance with GAAP. Controllable loss is defined as net loss adjusted for items outside of management's control and non-recurring items. These adjustments include workers' compensation expenses caused by actuarial revaluation and discount rate changes, expenses caused by the actuarial revaluation of Postal Service Retiree Health Benefits Fund (PSRHBF), and the amortization of the PSRHBF, Civil Service Retirement System (CSRS) and Federal Employee Retirement System (FERS) unfunded liabilities, which can fluctuate due to projected interest rates and inflation.

The following table presents selected results of operations, reconciles GAAP net loss to loss excluding worker's compensation adjustments and to controllable loss and illustrates the loss from ongoing business activities without the impact of non-controllable items for the three months ended March 31, 2022 and 2021: 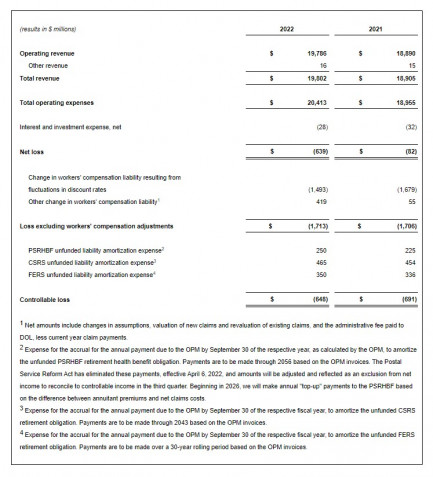 Financial results in the Form 10-Q are available at http://about.usps.com/what/financials/.

The Sales Per Employee Leaders

How to Prepare for the Tough Times Ahead

Print Outlook 2023: What to Expect