At some in-plants, managing document printing extends beyond the walls of the shop and into the hallways and offices of the parent organization. While the organization’s copier fleet may lack the capabilities of the more complex printing devices in the in-plant (and the operators are — generally — office workers or even students), it must still be managed, and this is where your expertise with this technology can prove invaluable.

According to recent IPI research, copier fleet management is handled by 38% of responding in-plant managers up from 31% in 2020. Those managers that oversee their fleets say they have cut waste, selected more appropriate machines, and saved money for their organizations.

For some, fleets can be an unwieldy beast. For others, their careful management delivers smooth operation, cost control, and added value.

At United Way of Greater St. Louis, the fleet managed by Jerilyn Leonard is seeing both change and reduction. It currently consists of 15 units, situated in five locations, which she says “is down from about 30. As the copiers are dying away, we’re replacing them with printers.”

Leonard, print shop manager for the nonprofit’s two-employee unionized in-plant, says that while these printers can both scan and copy, they are primarily computer printers and aren’t built for the volumes and capabilities the outgoing systems possessed. Much of this change is driven by cost, she says, noting that a printer is a significantly smaller investment than a copier. Amid the machine reduction, she says, “we’ve been able to move the remaining copiers to where they’re needed.”

When Leonard started with United Way of Greater St. Louis, management of the copier fleet was handled by the services and facilities department. The fleet was brought under the in-plant after Leonard was able to generate data based on utilization.

“Having data,” she says, “is essential.”

A primary advantage of centralized management of the fleet, she says, is that it enables a systematic approach to maintenance.

“When it breaks,” she adds, “I need somebody to fix it, so service reliability is essential.”

Asked whether her department monitors the fleet for large jobs that would run more economically in the in-plant, Leonard says her shop uses PaperCut print management software to track utilization, but hasn’t seen this happen much.

“People aren’t doing long runs like they used to,” she says.

While volumes are down so far this year, she says the organization’s upcoming United Way campaign season will likely change that.

Copier system replacement is also underway at the University of Wisconsin – Eau Claire, about 90 minutes east of Minneapolis, where the fleet is undergoing a “replacement wave” of its 146 multi-function devices (MFDs), says Craig Ernst, IT manager of Client Support Services. That process, which Ernst says is about two-thirds complete, should be finished by the end of this year. 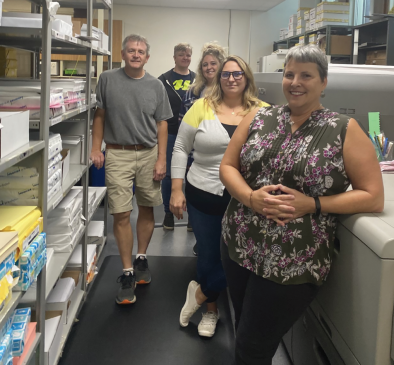 The new fleet includes a handful of black-and-white and color devices, all capable of scanning and copying. Fleet management is handled by the four-person Printing Services department, run by Manager Tina Wolfgram, who oversees toner and paper fulfillment.

Ernst sees several benefits of centrally managing the fleet, including support — it’s a lot easier to answer user questions — and better security across the network. Another benefit is the ability for users to print to any unit within the fleet.

“People working remotely can print from home, then grab stuff and go,” he says.

By creating a fleet comprised of five specific models from a single manufacturer, Ernst says, the system is easier to update, and it runs a single server, which “shrinks the footprint for IT support.”
Wolfgram says the in-plant team can monitor overutilization. For larger jobs, she notes, users are urged to use the in-plant, which offers lower cost and better quality. About overutilization, she says, “It’s not a real problem. We haven’t had to talk to anyone about their copier use.”

Compared to pre-COVID times, copier volumes “have definitely dropped,” Wolfgram says. Many education-focused pieces, such as course materials and exams, have gone digital. Volume decreases, she adds, are mainly in the shop’s black-and-white printing.

“Color is holding steady or going up because color pricing has come down, and color adds oomph,” she says.

Wolfgram believes the university will experience measurable savings through decreased energy use (she mentions sustainability is a consideration in this effort), and through streamlined services agreements.

To manage the copier fleet, Schachtner says his department has worked closely with the company’s IT group, “since the machines are on the network.” Further, the five-person in-plant, which has managed the fleet for more the 20 years, has a full-time vendor employee on staff. This employee, along with the vendor’s management software, works to manage toner supply and maintenance, looks for emerging problems, and keeps track of expenses. 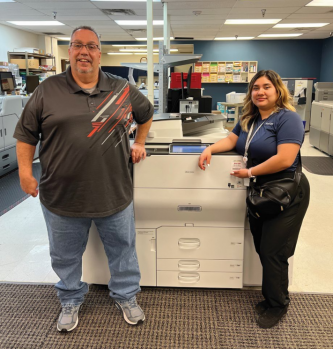 Schachtner says one strong company effort has been to eliminate desktop printers and move to a department-focused approach using MFDs. A strong benefit has been in security. He adds that his team can identify whether a non-network printer, scanner, or other device has been added.

Another benefit rises from the ability of the in-plant to select the right tool for the job. Among 10 different machine choices from the same vendor, he explains, “the decision on what to send where is made by the in-plant and IT, based on who needs it, how they are going to use it, and where they will use it.”

“We’ve been able to identify a few locations and redirect them to the in-plant,” he says.

Overall volumes from the fleet, Schachtner says, “are down quite a bit — and a lot during COVID because of remote work.”

While he thinks volumes will likely return to where they were before the pandemic, the copier fleet will be used differently in the future. He thinks people who work extensively from home “may have learned to work without paper.” The company’s legal department, for example, “used to print volumes and volumes of legal and regulatory documents,” he notes. “Now it’s ‘here’s your PDF.’”

Clearly, centralized management of copier and printer fleets can bring the consistency of a network to what may previously have been a chaotic mishmash of machines. These in-plants, by working with vendors, IT, and others, have controlled costs, eliminated confusion, and increased their organizational usefulness.

Take Your Office Copier Program to the Next Level