COVID-19 has changed Colorado state government in a big way.

“The state has learned that the work-from-home [approach] is quite successful, and many times you get more productivity out of people working from home than you do in the office,” observes Colorado State Printer Mike Lincoln. “And so, a lot of the state agencies … they’re keeping the majority of their staff working from home and consolidating their footprint.”

This transformation to remote work is driving new print volumes to the state’s Integrated Document Solutions (IDS) operation, which Lincoln oversees. So far, both the Department of Revenue and the Department of Health have decided to close their in-house printing operations and send their printing to IDS. This is not only cutting down on the redundancy of services for the state, it is giving those departments access to advanced technology and intelligent workflow processes they never knew existed.

“For the most part, every single one of those business units is thrilled to be moving over [to IDS] and being able to take advantage of some of the technologies that are available to them through our shop,” reports Lincoln.

This outcome has been a long time coming. Lincoln began discussing the idea of doing the Department of Revenue’s printing a decade ago, but its leaders had always resisted, wanting to maintain oversight of their projects, chiefly tax documents. The department’s printing operation relied on two Xerox Nuvera 144s and was staffed by two people, both IT personnel, plus five people on the mail side.

“There was a lot of resistance — until COVID,” says Lincoln.

With nearly all Department of Revenue staff working successfully from home, and its building empty, it suddenly seemed pointless to pay for prime real estate in the middle of Denver.

“The Department of Revenue saw an opportunity to reduce their footprint and save money in a very big way by not having a large presence in the downtown capitol complex area,” he says.

That meant closing its in-plant. Lincoln and his team met with the department’s 20 business units to better understand their jobs, workflows, volumes, and deadlines. Those units soon learned the transition of work to IDS would bring document integrity and security advantages they had never dreamed of. IDS employs Solimar’s Automated Document Factory (ADF) workflow software to re-engineer documents by merging data, combining multiple print streams, and adding Intelligent Mail Barcodes, while dynamically tracking jobs and generating reports. It uses intelligent inserters, which read barcodes printed on documents to make sure the right documents are inserted and sent to the right recipient.

“We have brought so much more value to the print and mail stream than they ever knew was available to them in the past,” Lincoln notes.

IDS recently upgraded its outgoing mail inserting capabilities by adding two new Quadient DS-1200 folder inserters to the two it was already using, along with a new DS-600i folder inserter. The DS-1200i inserters can collate, fold, insert, seal, and count up to 12,000 mail pieces per hour, and the DS-600i can process 6,000 pieces per hour. They feature high-capacity feeders, predictive intelligence that estimates when jobs will be completed, an Automated Insertion Management System for insertion integrity, and automated setup for fast job changeover. One of the inserters can handle both letters and flats.

“It’s quite convenient, and you don’t have to break the machine down between flats and letters,” Lincoln remarks. “It increases efficiencies quite a bit for us.” 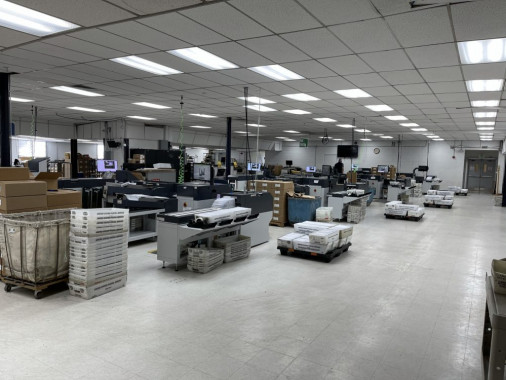 Though the Department of Revenue’s business units were thrilled with the new capabilities, the department’s leadership was concerned about the cost of moving its print and mail to IDS, since these costs had always been subsidized, while IDS charges each customer back for services. After significant planning and legislative action, those costs were moved from an overhead budget to an operating line to cover the new billing model.

As a result of this new business, Lincoln estimates the in-plant’s print volumes will increase 30%.

“It will probably double our mail volume,” he adds.

He anticipates an additional $4.3 million in annual revenue from the new work.

Though it’s bringing in somewhat less revenue and volume, the transition of the Department of Health’s quick copy work to IDS is also a welcome addition.

“What they printed in a month, I print in a day,” Lincoln says.

He is also hoping to absorb the Department of Labor’s printing by the end of the year.

“The main reason that agencies are more comfortable with making these kinds of decisions is because of the technological advances that we bring to this transactional print work,” he says. “It gives them a level of confidence.”

Though the pandemic has brought real challenges to IDS — half of its staff was out sick at some point in December — for the most part all three shifts have been operating nonstop.

The next order of business will be upgrading the in-plant’s inkjet capabilities. The shop’s Ricoh InfoPrint 5000 MP was installed in Dec. 2014, and Lincoln is ready for an upgrade, which he expects to happen in the fall.

Mike Lincoln: The Pull of Printing