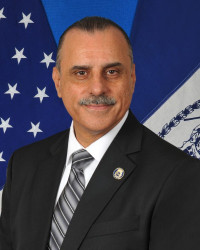 It may seem hard to believe today, but New York City was once a hotbed of commercial printing, flush with opportunity for aspiring young printers.

That was the world Julio Rosado entered in the late ’70s, fresh from a printing trade school and eager to embark on a printing career.

“Back in those days you could leave a place in the morning and be working an hour later,” recalls Rosado, director of the New York Police Department’s Printing Section. “[There were] that many places to work in New York City. It was unbelievable.”

Rosado made the most it. He estimates he worked in at least 20 different Manhattan print shops over the past four decades, ranging from platemaking shops to large commercial printers like R.R. Donnelley.

“It was a whole different environment,” he observes.

The lessons he took from those print shops still inform his decisions today as he oversees the largest police force in-plant in the country, staffed by 38 employees with an annual operating budget of $3 million.

“When I was in sixth grade, as part of a shop class, I [made] a case bound book,” he recalls.

“The teacher was very motivating and inspiring,” he reflects.

After graduating in 1975, though, Rosado did something unexpected: he enrolled at Alabama State University, with a swimming scholarship, majoring in Science.

It was a major cultural change; the slow southern pace was drastically different from the rapid tempo of New York City. But he was impressed with the diversity of people he met and how friendly everyone was, a good fit with his own sociable nature.

Two years later, he was back in New York, attending a city college. Printing kept calling him, however, and he soon enrolled in a printing trade school where his interest in the graphic arts was rekindled.

Into the NYC Print World

His first job was at a plate company called Klein Offset, where he handled camera work, stripping and platemaking. From there he moved on to a succession of printing companies around lower Manhattan. He worked at companies such as Liberty Engraving, which printed magazines like Sports Illustrated and People, and Color Wheel, where he taught himself QuarkXPress during his breaks.

It was at R.R. Donnelley, though, where he really made his mark. He was promoted to supervisor, where he sometimes managed the entire operation during the night shift. He traveled to Donnelley plants in Chicago and Lancaster, Pa., for training and conferences. As QuarkXPress, Illustrator, and Photoshop began to change the industry, he created a book of procedures for manual stripping and digital workflow to bring consistency to the process.

Though it was a good, stable job, that stability came crashing down on Sept. 11, 2001. The plant was just one block from the World Trade Center. Rosado was not working that day, but the repercussions hit him just the same after Donnelley closed the facility and laid him off.

Back on the job hunt for the first time in years, he discovered the New York printing scene had changed dramatically. There were not a lot of opportunities. He worked at Cunningham Graphics for several years, then got by doing production contract work and sales. It was tempting to leave the printing business behind, but the thought saddened him.

“It’s my passion,” he recalls thinking. “So I really didn’t want to get out of it.”

In 2016, while working at a microprinting company called Mekkatti, he heard about an opening at the New York Police Department’s Printing Section. Like many, he had no idea the police department had an in-plant.

After a very long interviewing process, Rosado got the director’s job, and only then did he get to actually visit the shop he would be managing.

“I never saw the shop till I got hired,” he says.

What he found was a passionate, skilled staff able to get the work done, but lacking a smooth process. He uses the term “controlled chaos” to describe the scene. Without anyone handling quality control, colors were inconsistent, and there was no process governing priorities, so work in progress was often dropped when a rush job came in.

Rosado began holding meetings to discuss improvements he wanted to make. He stressed the importance of brand consistency and attention to detail, and implemented a workflow based on priorities. He strove to make it clear that the NYPD Printing Section was a business with procedures in place.

“The first six months were hard,” he acknowledges. He was the new guy and some operators had been there for many years. But over time his changes were accepted and the shop’s performance improved. He’s very proud of the change in mindset of his staff.

“People are really paying attention, really looking at their work,” he observes. “Quality does matter. Anything that doesn’t look right gets questioned.”

Having that buy-in makes it easier to accomplish his goal of keeping customers happy with high-quality, quick-turnaround printing.

“It’s like a team now,” he says. “Everybody works together. The process is good. Workflow is good. Communication is a lot better.”

What he likes most about working for the NYPD is the diversity of work that comes to the shop and the range of equipment the in-plant has, allowing it to meet the demands of the organization.

In his time at the NYPD Printing Section, Rosado has upgraded some of the shop’s technology, adding two Xerox Color 1000 digital presses — one with a fifth station for applying clear dry ink — a Xerox D125 black-and-white printer, a 64˝ Epson SureColor S80600 wide-format printer, and a four-color Mark Andy/Presstek 52DI direct imaging offset press to address the NYPD’s growing need for four-color printing. Rosado is proud to have recently hosted a Mark Andy training program called My DI University at the shop. Six of his operators got certified as DI press operators.

In the near future, Rosado looks forward to opening another printing facility in Brooklyn to house a four-color, 40˝ Heidelberg press and a two-color, 29˝ Heidelberg.

Early in his tenure with NYPD, Rosado attended In-plant Impressions’ Digital Printing in Government and Higher-Ed conference in Washington, D.C., and was introduced to the In-plant Printing and Mailing Association (IPMA). He attended the 2019 conference and was thrilled at the opportunity to network with fellow in-plants.

When asked whether he made the right choice in sticking with the printing industry, Rosado has no doubts whatsoever.

“I feel very comfortable in a printing environment. I’ve been doing it my whole life,” he says.