The Association of College and University Printers (ACUP+) conference took place in Vancouver, Washington, recently for the first time in three years. More than 40 higher-ed and K-12 managers from 34 schools, including 19 first-time attendees, attended the 57th ACUP+ conference. Here’s a look back at some of the sessions.

Thole listed the multiple roll-fed and flatbed printers, as well as contour cutters, his shop uses to produce vehicle wraps, window clings, awards on acrylic, name badges, and even ADA-compliant signage. For the last item, the shop’s Canon Arizona lays down 12 layers of ink to create braille dots. The in-plant uses an HP Latex printer and Graphtec FC8600 to print and cut reflective graphics for wrapping vehicles, including campus police cars. 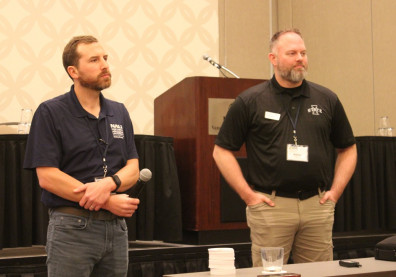 Dylan Turner (left) and Nathan Thole listen to an audience question during ACUP+.

Turner noted that NAU’s sign shop (separate from the in-plant) was not very motivated and had been declining a lot of work, so the in-plant stepped in with a “fake it till you make it” approach, and slowly began building its wide-format business. Today this work generates $175,000 a year and is growing, he said. One issue his Flagstaff, Arizona-based in-plant faces because of its location at 7,000´ above sea level is increased UV exposure, which means long-term outdoor prints must be laminated to keep them from fading. He standardizes the media the shop uses to simplify inventory, and has trained his staff to handle graphics installation on campus. 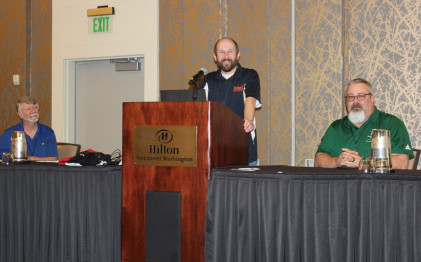 Tips for Getting The Most Out of Your Automated Cutter
Comments
Subscribe
Upcoming Webinars
Production Inkjet: A Smart Choice for Education